Fuzuli: Was he mad or a genius? 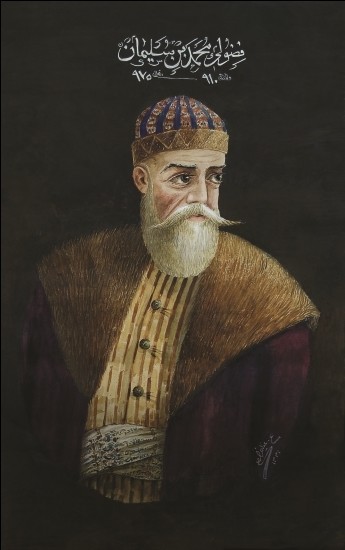 A portrait of Fuzuli by Azim Azimzade, on display at the National Art Museum of Azerbaijan.
by Hakan Arslanbenzer Apr 08, 2017 12:00 am

One of the most prominent figures in today's diwan poetry, Fuzuli is known to have lived in Iraq in the 15th century and produced a lot of literary masterpieces in the Persian language, which enabled him to tbe understood and popular in the Ottoman literature

He was able to write in three languages, as a poet and philosopher. Even though he behaved like a "rind," he was a "zahid" and "dervish." He was Sunni according to Süleyman Nazif and Shiite according to Fuad Köprülü. He was both a mullah and a sufi. Although he was born into the lands of the Safavids, the Ottomans had conquered those lands. He dedicated his works both to Shah Ismail and Suleiman the Magnificent. To sum up, Fuzuli was a great poet stuck between two great Islamic empires and two great religious sects. He was in limbo between being mad and genius, zahid and rind.

A waterfall in the lands of Karbala

As usual, there is no consensus with regard to Fuzuli's place or date of birth among researchers. Since he was born at the end of 15th century, died in the 16th century and lived in a land belonging to the Akkoyunlu and Safavid Empire and quite distant from Istanbul, even Ottoman biographers cannot provide more than informed guesses of these details. It has been related from different sources that he was born in Baghdad, Hille and Karbala. Today, researchers mostly lay emphasis on Karbala as his birth place.

Actually, Karbala is a symbolic birth place, since Hussein and many other evliyas (saints in Islam) are buried there. In the foreword of his Persian "diwan," Fuzuli said his poems were from the land of Karbala and needed to be respected for this reason. The lands of Karbala are especially holy for the Shite and a small baked triangular piece of Karbala's soil is used for prostration in certain lands. And Fuzuli wrote poems singing like a waterfall from this Karbala land.

Though the birth date of this great rural poet is also uncertain, researchers generally accept his birth year as 1480. Thus, when he dedicated "Beng ü Bade" to Shah Ismail, he was in his 30s and when he presented his "kasidah" to Suleiman the Magnificent, he was in his 50s. When we think over the conflict between the Ottomans and Safavid, we can understand why Fuzuli was not so lucky as a poet.

You listened to gazelles from him

His real name was Mehmed, his father's name was Süleyman. He was a Turkman belonging to the Bayat clan of the Oghuz. A few orientalist researchers such as Huart, Krimsky and Minorsky have argued that Fuzuli was a Kurd, yet they do not rely on any material evidence. Contrarily, Fuzuli mentioned himself as such "I, the Turkish-speaker." Later on, he learned Arabic and Persian as they were necessary to advance in learning science and culture, yet, it is obvious that his mother tongue was Turkish. Moreover, who could object to our suggestion if we say his gazelles were so good that they could teach Turkish on their own?

Unfortunately, we do not have much information about his family, education or manner. In his works, he expressed that he was engaged in science but did not give any details. It can be conferred that he was a poor dervish-poet from his well-known books of complaints and his non-involvement in politics. His lands passed into the hands of the Safavids from the Akkoyunlu dynasty, and then into the hands of the Ottomans; thus, he could not establish a relationship with the state according to his desires. It is equally obvious that he appealed to the state, because he dedicated works to the head of Akkoyunlus, Shah Ismail, Suleiman the Magnificent and his pashas.

Book of complaints and beyond

After Suleiman the Magnificent and his men left Baghdad, Fuzuli wrote his famous book of complaints. This is a letter written in literary language and stating that promises given to him were not fulfilled, that his poetry was not appreciated adequately and that he had gained the necessary financial support from state. Today, it may sound weird that a poet could bow that much to the Sultan and his men. However, it is understandable that there could not be a democratic relationship between poet and sultan in the 16th century.

It is also known that Fuzuli exchanged letters with Selim II, the successor of Suleiman, and asked consent to go to his palace. Unfortunately, Fuzuli died before reaching the center of power and could not escape from provinces. Nevertheless, the Ottoman Empire gave Fuzuli a modest salary. His most fruitful time was during that of Ottoman dominance. He could complete his immortal works, such as "Layla and Majnun," "Hadikatü's Süeda" and his diwans in Turkish and Persian.

Clear of my relief, doctor

The theme of divine love, exceeding its object, bears the trace of Fuzuli. His odes especially bear a marvelous lyrism. These gazelles are among the most sympathetic, fluent and psychologically striking poems of our poetic history. Fuzuli's odes are so fascinating that many of them were composed and have been performed by gazelle singers. His odes are still vocalized and listened to passionately both in Azerbaijan and Turkey, Mosul and Kirkuk.

In his poetry, the woman's face is so beautiful that one who loves this beauty will discover the secret of creation. For Fuzuli, the love beginning with a mundane taste arrives at the divine love, giving up all worldly things. In contrast with Ibn Arabi's concept of love, Fuzuli's love for the beloved woman never disappears; it overcomes even death. The notion of giving up Layla in order to discover Mevla (Lord) means giving up Layla's material, corporal side. Majnun never gives up Layla's meaning for him because if Layla does not exist, Majnun cannot know himself. Love is the basis of creation; it upholds the entire universe.

Such a passionate way of thought, locating love at the center of the universe is very rare both in Eastern poetry and Western literature. Fuzuli's notion of love is much deeper than the one expressed by Petrarch, Dante and Shakespeare. It would be perhaps best to consider the great poet's notion of love that deeply inspired our culture for centuries in the cosmological meditations of Islamic sufism.