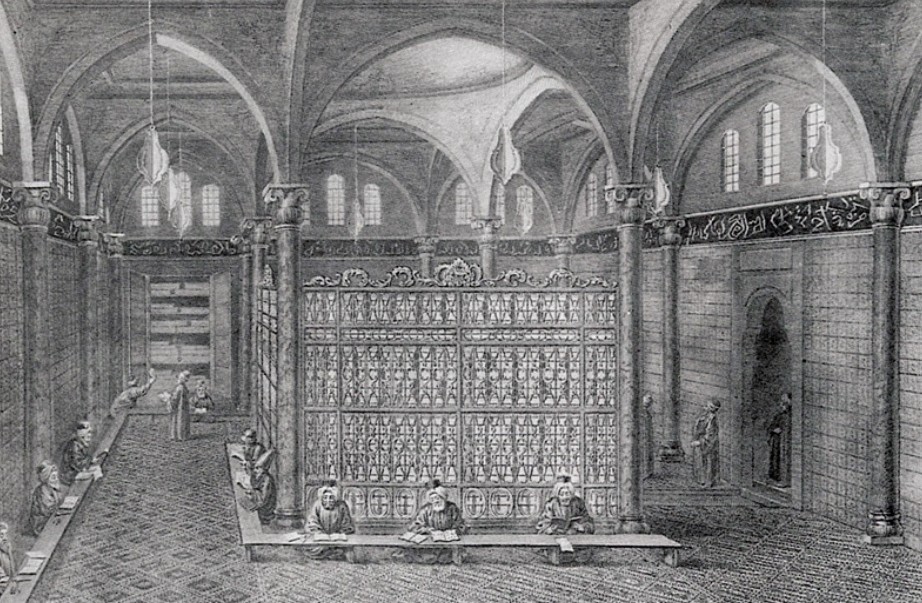 Since the 1980s, we have spoken about making peace with our history, however, "diwans" (collected poems) of the top 100 Ottoman poets have not been published in the new Latin alphabet. The strangest point to mention is that while research into Ottoman history takes place in universities across Turkey and worldwide may be considered intricate and in-depth, the research has not provided us with a closer look into the life stories, works or personal thoughts of scholars, poets and statesmen who were such a major part of the Ottoman Empire.

A renowned historian who aims to shed light on the life of one of these Ottomans, İlber Ortaylı, said: "Grand Ragip Pasha was an informed administrator and a well-known poet. Renowned for contributing to the institutionalization of the library during Ottoman times, Grand Ragıp Pasha's legacy is sadly not one that is being honored." The historian went on to note, "Today marks the 250th anniversary of Grand Ragip Pasha's death; yet, do see any kind of celebration taking place?"

When we mention Grand Ragıp Pasha, the first and only thing that tends to come to mind is the Ragıp Pasha Library located in Laleli, which remains closed due to damage from the 1999 Marmara Earthquake. The library's collection has since been moved to the Süleymaniye Manuscript Library and includes more than 1,200 manuscripts, more than 1,700 old-lettered-works and nearly 9,000 new-lettered-works, making the collection a rare treasure.

A great statesman in a challenging era

Born in 1699, Grand Ragıp Pasha was truly a man of the 18th century. It is impossible not to see this reflected in his personality and his political efforts, as well as his poetry and his thoughts. The pasha was an earnest and cautious man who never gave up and applied an attitude of endurance to all aspects of his life, despite having little faith in the world itself. He showed excellent skills in diplomacy during interactions with Iran, Austria and Russia, expressing the Ottoman bureaucracy's hostilities amid efforts to survive rather than put his head in the lion's mouth. He was content to live in poverty surrounded by abundance, according to personal accounts in his poems.

He was a lucky man in terms of family and education. His father, Şevki Mehmed Efendi, was a registry secretary and worked as a civil servant in the land registry cadaster. At the time, the Ottoman economy was based on land and agriculture, making his job with the Land Registry even more important. The story of Ragıp's life tells us that he was born on the very side of the state, unlike ordinary people, and lived his 64-year life in the Ottoman state before he died in 1763.

From now on, we are reading a success story. Ragıp began moving toward diplomacy following the Iranian War of 1722. Assigned the mission to register lands acquired from Iran and sent to the East, he participated in negotiations with Iran as a secretary before becoming provincial treasurer of Revan in 1724 as a result of these efforts.

Wrenching Baghdad away from Nadir Shah

Having become the provincial treasurer of Baghdad in 1730, Ragıp managed negotiations with Iran, while Nadir Shah surrounded Baghdad with his army for three years; more precisely, he put the shah off and helped Ottoman forces in Erzurum come and rescue Baghdad, which brought Ragıp a great reward. He was appointed as a treasurer to the Ottoman Army and deputy foreign secretary in Erzurum, going on to become the servant of the Grand Vizier.

Ragıp was always at the negotiating table regarding war with Iran, Russia and Austria, later serving as deputy. He was the perfect diplomat, serving for a few years as foreign affairs secretary and working as the governor of Egypt for a few years, as well. He defeated the lords of the Mamluk Sultanate, who had defeated the Ottoman governor in Egypt and took very serious measures. However, Egypt did not like Ragıp Pasha and vice versa, which resulted in the withdrawal of Ragıp Pasha.

While waiting to become grand vizier, Ragıp was appointed as governor of Aleppo thanks to his bureaucratic tricks. He became grand vizier in 1757, but after just four years, he died. This short era is known as the Era of Moderation and Wisdom.

Moderation and wisdom in poetry

The life and poetry of Grand Ragıp Pasha seem to mirror each other; what he wrote and what he lived are not different. A plain and strong utterance are dominant in his poetry, and it can be said that he principally owes his utterance to Nefi like most 17th century poets and thereon. His tendency to utter words of wisdom and his use of maxims comes from Nabi.

When Nabi composed his poetry in the last part of the 16th century, poems of the Islamic lands ranging from the Balkans to India were under the influence of extremely artistic poetry. This difficult and unnatural style known as Sebk-i Hindî (Indian style poetry) compelled poets to utter their poetry in a way never seen before, also emptying the poem in some ways. Nabi brought meaning and truth back to poetry.

The work of Grand Ragıp Pasha was an achievement in the valley of Nabi. Pasha wrote poems based on the power of thought rather than fancy, emphasizing artistry and playfulness. For those looking to decode the pasha's poetry, knowledge of the old language is necessary. For example, the dictum that says, "Courageous gypsy boasts with his own theft," which is known by all and uttered frequently by columnists and politicians, sounds like a proverb, but it actually belongs to Grand Ragıp Pasha and is cited from his ode that begins, "Who sees the wrecks tells his state." What this entire ode says is that every person interprets events according to his own morals and expresses himself concordantly with his temperament. The pasha concludes in seven words: "Consistent is the wisdom with temperament."

The poems of Grand Ragıp Pasha were collected in an anthology amid the efforts of Müstakimzade after his death. Some of his poems can be found in the "Journal of Ragıp Pasha," which brought his poems and articles written in three different languages together. Writings of diplomatic negotiations carried out by the pasha as well as the conquest of Belgrade, which he witnessed, are also published in a book. He also had some unfinished translations, an epistle teaching the rules of "aruz" (a type of meter in poetry) and a book on Arabic philosophy.

What matters most is the library he established. In the library's garden lies the tomb of the pasha. It is interesting that he was buried not near a mosque but in the garden of his own library, paying tribute to the spirit of the pasha and the Ottoman Empire in the 18th century.