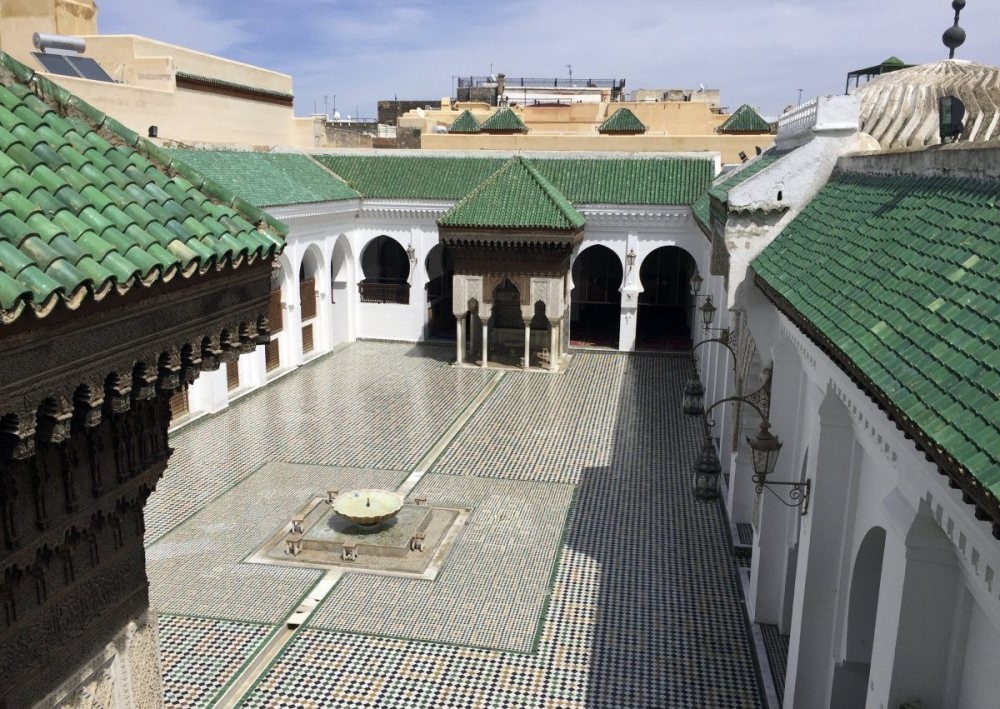 The Qarawiyyin Mosque and University is considered by many historians to be the oldest, continually operating, degree-granting university in the world.
by Hakan Arslanbenzer Nov 18, 2017 12:00 am

A very intellectual, smart and generous woman of her time, Fatima al-Fihri founded the world's first university to continuously grant degrees, the University of al-Qarawiyyin, an institute that has provided education for many philosophers and scholars who went on to significantly contribute to the cumulative knowledge of humanity

Did you know that a Muslim woman founded the world's first university? Maybe you did not. No popular sources beyond academic history books concerning the golden age of Islamic civilization have ever mentioned such a fact. Instead, people are generally inclined to think that Islam would never allow women to even attend classes in madrasas (schools), which were founded as early as the ninth century.

Actually, Muslim women were very active in the scholastic studies of early Islam. Aisha, one of the Prophet Muhammad's wives, was among the prominent Islamic jurists of her time. She was also involved in a number of political events after the death of the third caliph, Uthman ibn Affan. She was also the initial source of many hadiths thanks to her well-known intelligence and memory. There are other examples, like Umm Waraqa who knew the Quran by heart and was praised by the prophet himself, or al-Shifa "the Healer" bint Abdullah, the first Muslim woman to teach literacy and a folk medicine practitioner.

It is obvious that Muslim women did not stop learning after this first generation, though certain restrictions were applied to them by the feudal dynasties succeeding the Great Caliphs. On the other hand, during the feudal dynasties, the majority of rich men's daughters and wives, though restricted socially to some extent, were allowed to receive educations, teach others and even sponsor educational institutions.

Fatima al-Fihri was one of two daughters of a wealthy merchant named Muhammad al-Fihri of Qayrawan, now known as Kairouan, Tunisia. Qayrawan is now a UNESCO World Heritage site thanks to its historical architecture dating back to the late seventh century. Founded by the Umayyad dynasty in 670, Qayrawan was a city of Islamic scholarship, culture and civilization. Many scholars were attracted to this earthly paradise of learning and prayer. The city also served as a military post for the conquest of al-Gharb in northwest Africa.

The Aghlabid dynasty ruled Qayrawan under Abbasid Caliphate during the eighth and ninth centuries. They brought peace to the region Ifriqiyya and conquered Sicily. Aghlabid palaces were also famous. In short, when Fatima al-Fihri left Qayrawan with her father for Fes in the west, it was like they were leaving one paradise in order to create another.

Indeed, we don't know much about Fatima al-Fihri's life. Her family was part of a community called the "Qarawiyyin" (the ones from Qayrawan) through the original citizens of Fes, which was the capital city of another Muslim dynasty, the Idrisids.

Fatima's family migrated early in the ninth century from Qayrawan to Fes, which was then under the rule of Idris II, a respected ruler and devout Muslim. At the time, Fes was the center of attention in al-Maghrib and held the promises of fortune and happiness. After becoming one of the most powerful Muslim cities in the world, Fes boasted a rich combination of religion and culture, both traditional and cosmopolitan. This was the city, on the left bank of the River Fes, where Fatima's family settled, and where she eventually married.

The heart of Fes: Al-Qarawiyyin

Today, Fes is among the most fascinating touristic destinations in the world. The old medina (city) of Fes, "Fes al-Bali," is especially stunning. Resembling a labyrinth of thousands of crisscrossing narrow streets, foreigners easily stand out as strangers in old medina. The colorful and elegantly designed gates of the houses, the 14 fortress gates of the old medina including the famous Blue Gate, the primitive transportation through the streets and the local craftsmanship are enough to charm anyone.

However, the heart of Fes beats in al-Qarawiyyin. The name Qarawiyyin refers to the first university in the world, as well as the mosque neighboring it. The founder of both was Fatima al-Fihri.

After a lot of sweat and hard work, the al-Fihri family was eventually blessed with prosperity. Fatima's father, Muhammad ibn Abdullah, became a hugely successful businessman. After the deaths of Fatima's husband, father and brother in short succession, Fatima and her sister Mariam received a vast inheritance that insured their financial independence.

It was in this latter period of their lives that they distinguished themselves. Having received a good education, the sisters in turn hastened to dedicate all of their wealth to their community. After observing that the local mosques in Fes could not accommodate the growing population of Muslims, many of whom were refugees from Islamic Spain, Mariam built the breathtaking Andalusian Mosque in 859.

Fatima, in her part, founded the Al-Qarawiyyin Mosque and University, considered by many historians as the oldest continually operating degree-granting university in the world. Historical references note that she directly oversaw and guided the construction process in great detail, certainly a testament to her inner dedication as she had no expertise in the field.

Fatima is said to have fasted and prayed every day, beginning with the first day of construction until the mosque and the university were finally finished. She demonstrated determined patience alongside her commitment to successfully found such a place.

Al-Qarawiyyin Mosque, one of the largest in North Africa, housed the university that would become a summit of advanced learning in the Islamic world. The University of al-Qarawiyyin is also known for its famous graduates, including Abul-Abbas and the jurist Muhammad al-Fasi, who were distinguished Muslim thinkers of their time. Other prominent names associated with the institution include: The great Sufi and Islamic jurist Ibn al-Arabi, the historian and the founder of sociology Ibn Khaldun, famous geographer Muhammad al-Idrisi, and the astronomer Nur ad-Din al-Bitruji (Alpetragius).

The university taught only the Quran and fiqh, at first. Later, its curriculum broadened to include mathematics, Arabic linguistics, medicine, astronomy, chemistry, history and geography. These courses were not only for Muslim youth. Christian and Jewish students were also welcome. Besides, the education was free since Fatima sponsored the whole institute. Leo Africanus, the famous author and traveler, Maimonides, Jewish rabbi and philosopher, and Pope Sylvester II were among Al-Qarawiyyin's graduates.

The University of al-Qarawiyyin is still active and carrying on the name and generosity of Fatima al-Fihri.