Yasser Arafat: Father of a nation 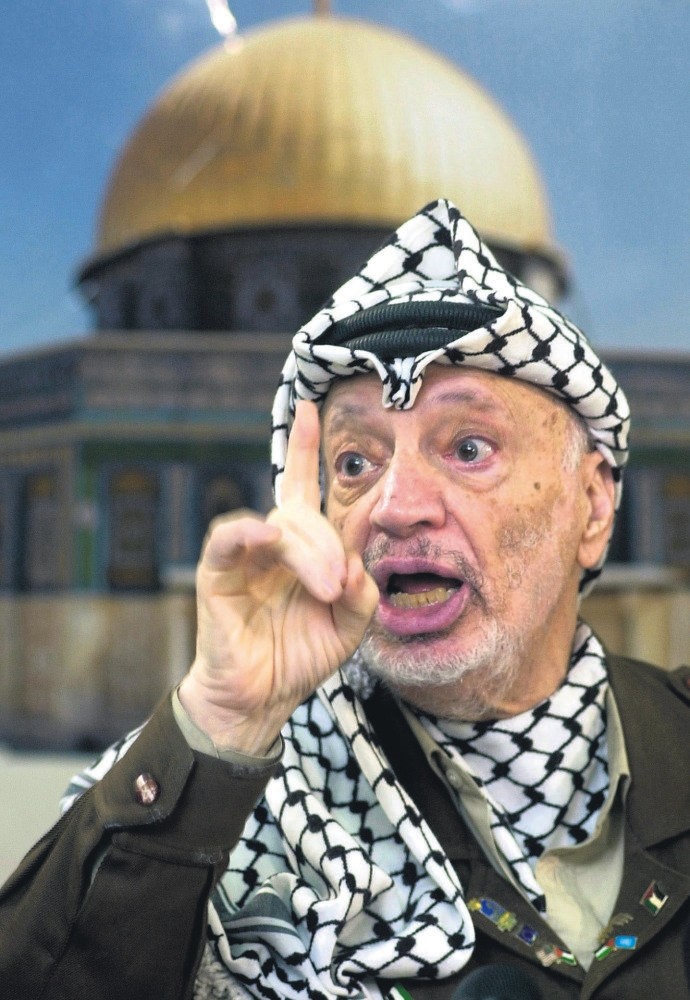 Palestinian leader Yasser Arafat talks to the media during a press conference at his headquarters, Ramallah, West Bank, 2002.
by Hakan Arslanbenzer
Dec 23, 2017 12:00 am

In March 2017, Israel's Interior Minister Aryeh Deri ordered the city council of Jatt, an Arab town in Israel, to remove street signs named after late Palestinian leader Yasser Arafat. Benjamin Netanyahu, the Israeli prime minister, said: "We cannot have streets named after Israel's enemies within the state of Israel." The city council of Jatt removed the street sign immediately after Netanyahu's threat. However, no one can remove Arafat's name from the hearts of many people, including the Palestinians living under the Israeli government.

It is an interesting point that Arafat was granted the Nobel Peace Prize with Israeli counterparts, Shimon Peres and Yitzhak Rabin, who was killed by an Israeli fanatic because of the peace talks he ran with Arafat, the first president of the Palestinian Authority. Though he fought against Israel in his youth, Arafat chose the path to peace afterward. Netanyahu's enemies of Israel discourse shows signs of paranoia and fear of a dead man.

On the other hand, Jatt Mayor Muhammad Taher Wattab defended naming the street after Arafat, saying: "Yasser Arafat signed a peace deal with Israel and it is a shame that the prime minister finds the need to waste his time on the name of a street in a small town like ours." He added: "From our perspective, Arafat is the official leader of the Palestinian people, with Israel recognizing him as a partner for peace negotiations. Therefore there is no legal, social or moral prohibition in naming a street after him."

Indeed, Arafat walked a long road from exile to fighting, and later from fighting to peace talks.

Arafat was born Mohammed Abdel Rahman Abdel Raouf Arafat al-Qudwa in 1929 to Palestinian parents in Cairo. His mother died when he was just four, and his father sent him to Jerusalem to live with his uncle, a brother of his mother Zahwa. After spending four years with his uncle in Jerusalem, he returned to his father in Cairo, with whom he did not have close ties. Arafat did not attend his father's funeral in 1952.

Arafat's father Abdel Raouf al-Qudwa al-Husseini was a Palestinian from Gaza, although he was Egyptian on his mother's side. Abdel Raouf applied to courts to inherit the family land in Egypt, but he could not get anything. He ran a business as a textile merchant in the Sakakini district of Egypt, where many religious minority groups lived with Muslims.

In 1944, Arafat enrolled in the Civil Engineering department of King Fuad I University, where he graduated in 1950. He was among the Arab nationalists during his time at university. He also helped smuggle weapons into Palestine under British rule. He fought against the British and Zionist forces beside Egyptian troops in 1948.

Making of a leader

In early 1949, Arafat returned to Cairo to continue university. He was also very active in Palestinian politics in Egypt. He acted as the president of the General Union of the Palestinian Students.

However, the political situation was not comfortable for Palestinians in Egypt. The Suez Canal crisis in 1956 exploded a few years later, then the Free Officers Movement coup, which resulted in military administration, and the king was overthrown. Many Palestinians, especially educated ones, moved from one place to another in order to find some peace and earn their living. So did Arafat. He got a visa for Kuwait, which was under British rule at that time.

In Kuwait, Arafat began working as a schoolteacher. Meanwhile, he met Salaf Khalaf (Abu Iyad) and Khalil Wazir (Abu Jihad), two Palestinian friends of Arafat's who later would become his most important aides in Fatah. Fatah is a reverse acronym of the Arabic Harakat al-Tahrir al-Watani al-Filastini, which translates as the Palestinian National Liberation Movement. Fatah also means conquest. The initial human source of Fatah was the Palestinian refugees in Kuwait recruited by Arafat with his close relations with the community.

The young leaders of Fatah made Arafat the leader of the people. Khalil Wazir was an organizer, and he recruited soldiers while Arafat was good at speaking, making connections and diplomacy. They decided to differentiate their movement from other Palestinian groups in dedicating themselves to the armed struggle for liberating their homeland, Palestine. They were at equal distance to all Arab nations, which made them lead the Palestine struggle for freedom for decades.

After making numerous guerilla raids on Israeli troops and gaining enough fame among fellow Palestinians, Arafat founded the Palestine Liberation Organization (PLO) as an umbrella structure for all Palestinian liberation groups. After the Six-Day War, Fatah took chief responsibility of the PLO and Arafat became the chairman of the PLO executive committee.

Obliged by King Hussein, Arafat moved the PLO from Jordan to Lebanon, which gave a critical role to the PLO in the Lebanese Civil War. While in Lebanon, PLO guerillas attacked Israeli troops on many occasions. Additionally, Arafat continued a war of diplomacy against Israel at the United Nations and in negotiation with other states.

Israel made the PLO exit Lebanon in the 1980s. A Mossad agent killed Abu Jihad in Tunisia in 1986. In 1987, Arafat launched the first intifada against the Israeli occupation of Gaza and the West Bank. Israel used disproportional force against the unarmed protesters, which became a standard procedure for the Israeli military and police.

In 1988, Arafat made a speech at the United Nations declaring his wish for peace in which both sides could live together. This entered peace talks with his Israeli counterparts. In 1993, both sides made the Oslo Accords, which allowed Palestinian self-rule and elections in the Palestinian territories.

Arafat also held peace talks with consecutive Israeli leadership, including Benjamin Netanyahu and Ehud Barak. Nevertheless, Israel never wanted Arafat to be the leader of Palestine. Finally, they sieged his headquarters in Ramallah and destroyed it with bulldozers, which was a breach of all peace agreements. Arafat now was isolated and he left his post as prime minister to Mahmoud Abbas under pressure by the U.S.

In October 2004, Arafat fell very ill and went to France by plane for medical treatment. He died there the following month, on Nov. 11.

After Arafat's death, many conspiracy theories were offered, most of which held Israel responsible. In November 2013, Swiss researchers released a report saying that tests conducted on Arafat's remains and some of his belongings support the theory that the late Palestinian leader was poisoned. Other research by Russians concluded he died from natural causes.