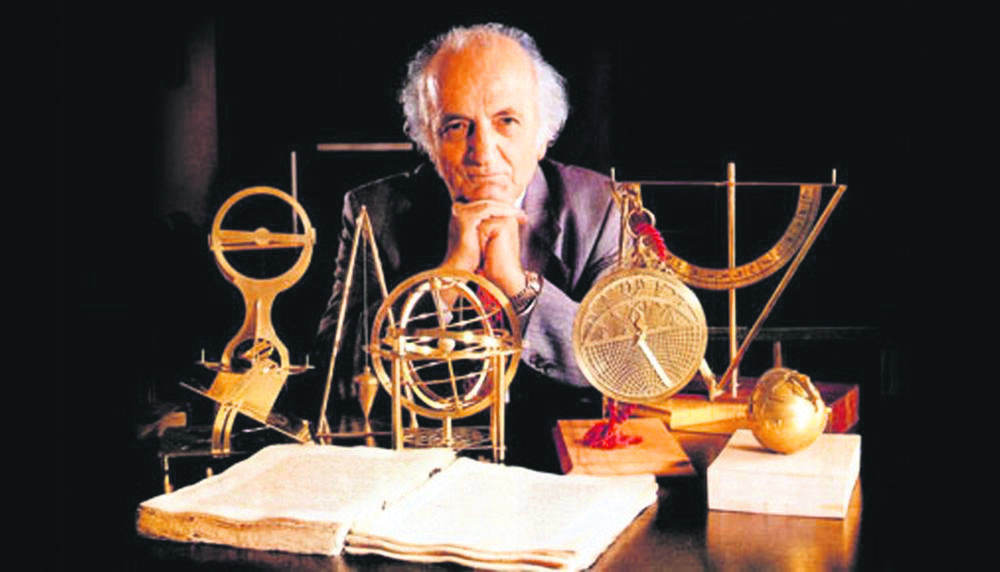 Fuat Sezgin researched the scientific works of Muslims and spent his whole life writing about the history of science in the Islamic world.
by Hakan Arslanbenzer
Jul 07, 2018 12:00 am

A scholar who could read in 30 languages, Fuat Sezgin dedicated his life to academic research of books on Islamic history

Eurocentrism is not only a political issue, but it has had great impact on culture, arts and science as well. According to the old-school Eurocentric understanding, modern science has been exclusive to Europe, especially Western Europe. The one and only stage of the birth and growth of modern science is Europe, says Eurocentrism, adding that all other contributions have been marginal and ignorable.

Eurocentric neglect is a major problem for many fields. Fortunately, recent studies have tried to show how non-European creations of thought, including scientific methodology and principles besides many findings, have influenced and contributed to science both generally and particularly as well.

Among many scientists who had put forward great efforts to include non-European scientific production within the overall history of science, there were Turkish scientists, too, namely Aydın Sayılı and Fuat Sezgin. Sayılı, who had received a Ph.D. degree from Harvard University in the history of science, showed that the first people to establish astronomic observatories were Muslims since they had to precisely measure the times of daily prayers. However, Fuat Sezgin made further researches on the scientific works of Muslims and spent his whole life in writing about the history of science in the Islamic world.

Fuat Sezgin was born on Oct. 24, 1924 in Bitlis, eastern Turkey. He was schooled in Erzurum before he moved to Istanbul in 1943 in order to attend the Faculty of Engineering. However, he changed his whole plan when he attended a seminar given by Helmut Ritter, one of the German orientalists lecturing in Turkey during Hitler's "Third Reich." He was so fascinated by Ritter's seminar that he instantly decided to study with him.

Ritter was working at the Oriental Studies Institute of the Istanbul University. So, Sezgin attended the Institute and studied with Ritter for years. Unfortunately, higher education was suspended in Turkey because of the fact that Bulgaria, which was siding with Germany in the war, began military deployment to its border with Turkey. Ritter advised his students to learn some foreign languages during the suspension period. Sezgin learned Arabic by reading very difficult old Arabic texts by himself. He used to study Arabic seventeen hours a day. He would continue this overwhelming tempo of studying until his last days. His master, Ritter told him to learn another language every year, and he managed to read in thirty different languages.

Orientalists have generally argued that the hadith books including the Sahih al-Bukhari, Bukhari's tremendous collection of hadiths, depended on oral traditions rather than written sources. Fuat Sezgin pulled down this orientalist prejudice against Islamic knowledge by showing the exact written sources of al-Bukhari, which also implied that written citations were not exclusive to Western-European scientists. He received his Ph.D., on al-Bukhari's Written Sources in 1954, while he published it as a book two years later. After his first triumph in academic studies, Fuat Sezgin became a professor of history of science at the Islamic Researches Institute of the Istanbul University.

The left-Kemalist junta banned 147 professors from the university after the May 27, 1960 coup. The military's order was final at that time and nobody could do anything about it. Even the courts were under military control. So Sezgin had nothing to do other than moving to Germany. He began studying at the Frankfurt University. After a few years' studies, Sezgin submitted a dissertation to the Frankfurt University concerning the history of Arabic-Islamic science and received a second Ph. D. degree in Germany.

His luck seems to have turned at a certain point. He married to Ursula Sezgin, who was a young German orientalist, and became a professor at the Frankfurt University in 1965. The Sezgin couple had a daughter named Hilal (the Crescent, which is mostly referred to as the symbol of Islam) born in 1970.

Sezgin's masterpiece is deemed to be the "Geschichte des Arabischen Schrifttums" (History of Arabic Sciences), which has been a detailed history of the Arabic-Islamic scientific works between the 7th and the 14th centuries. It was a lifetime work for Sezgin. He published the first volume of this great work in 1967. Until his death, Sezgin could have published 16 other volumes. The professor was writing the 18th volume, when he died.

Though Fuat Sezgin had started with the Islamic aesthetics and hermeneutics, "Geschichte des Arabischen Schrifttums" concentrates on natural sciences undertaken by Muslims for more than seven centuries. However, the 17 volumes' study introduces poetry, history, Quran and hadith studies, Sufism, Islamic theology together with natural sciences including medicine, pharmacology, zoology, chemistry, mathematics, botanic, astronomy, meteorology and such.

In 1967, a special committee of 10 prominent scientists from several countries came together to develop the History of Arabic Literature work of Carl Brockelmann, another famous German orientalist, they appreciated the "Geschichte des Arabischen Schrifttums" and abolished the committee in order to give the job to Fuat Sezgin.

Sezgin received the King Faisal International Prize for Islamic Studies in 1978. Interestingly he used the money given to him by the King Faisal Foundation in order to establish his own institute, the Institute of Arabic-Islamic Sciences under the Gothen University in 1982. He also founded a museum under the same university. He collected more than 40 thousand books concerning the history of Islamic sciences.

Fuat Sezgin established the Islamic Science Museum in Istanbul. He lectured in many Turkish and German universities. He received the Turkish Presidency Culture and Arts Grand Prize in 2013, he also received many prizes by many presidencies and royal houses of the Islamic world. He was member of many national and international scientific academies.

Fuat Sezgin died on June 30, 2018 in Istanbul. Recep Tayyip Erdoğan, President of Turkey has declared 2019 as The Fuat Sezgin Year.