Turkish actress Adile Naşit, starred in many plays, movies and the children's program ‘Uykudan Önce.' She was a very sympathetic person with a huge smile on her face both on and off the screen

Turkish cinema is rich for comedians. From the early years of the domestic film industry until now, there have been numerous comedy stars in every generation. Turkish audiences have always loved comedians, either on the screen or on the stage. The comedy genre has been rooted in the long tradition of the Turkish performance arts, though Western influence is also considerable.

Beside the great drama actors, Turkish cinema has offered a wide range of comedy stars to its audience throughout its century old history. Among comedians, one actress stands alone. Adile Naşit, who was originally a stage actress, who played in various hit comedy films with such great actors as Münir Özkul, Vahi Öz, Ali Şen and Kemal Sunal.

Adile Naşit was born on June 17, 1930 in Istanbul. Naşit was her father's name. Naşit Bey, whose nickname was "Komik-i Şehir" (Comedian of the City), was a great figure in the Ottoman improvisational theater. Abdulhamid II is said to have him acted in the palace, gaining him fame as "the comedian who made Abdulhamid laugh."

Naşit Bey's father was Ahmed Bey, an Ottoman military officer. He married Amelia, who was of Armenian-Greek descent. Amelia's mother was also a stage actress. Adile's brother Selim Naşit was also an actor. They used their father's name as a surname, though their family name was Özcan. Adile Naşit's name was officially "Adile Keskiner" because of her marriage with Ziya Keskiner, also a stage actor. They remained married until Keskiner's death in 1982. After her first husband's death, Adile Naşit married Cemal İnce in 1983.

Adile Naşit was a very sympathetic person both on the screen and in her personal life. She had many nicknames including "Ado," "Adile Ana" (Mother Adile), "Adile Teyze" (Auntie Adile) and "Masalcı Teyze" (Storyteller Auntie).

Adile Naşit acted first on the stage, when she was a fourteen-year-old high school student. In the same year, she lost her father Naşit Bey. After her father's death, she left school and was admitted at the Istanbul City Theater. She would continue stage-acting until 1975. Adile Naşit's first role was in the "Her Şeyden Biraz" (A Bit from Everything) with Halide Pişkin group. They played in various corners of Istanbul. After that, she worked for the Muammer Karaca Theater. The 1940s and 50s were golden years of private theaters in Istanbul.

Naşit established a private theater group with Vahi Öz and Aziz Basmacı in 1948. She acted in her own stage for three years before she returned to the Muammer Karaca Theater in 1954. She worked with them for consecutive six years.

In 1961, she established the Naşit Theater with her husband Ziya Keskiner and brother Selim Naşit. They played together until the company failed in 1963. After that, she began working with the Gazanfer Özcan – Gönül Ülkü company and stood with them until 1975, when she left stage-acting for the sake of the silver screen.

On the silver screen

In fact, from the late 1940s until the early 1970's, Adile Naşit had received several minor roles in films. Her real attendance at cinema begins with her roles in Ertem Eğilmez films. Eğilmez impacted the Turkish film industry during the entire 1970s with the family-friendly comedy-dramas, which attracted millions of people to the movie theaters. He made films with a limited number of actors including Tarık Akan, Halit Akçatepe, Adile Naşit and Kemal Sunal.

On the other hand, Naşit's first outstanding role in an Ertem Eğilmez film was a dramatic one. She played the teacher of "Kahraman" (Hero), the little boy with 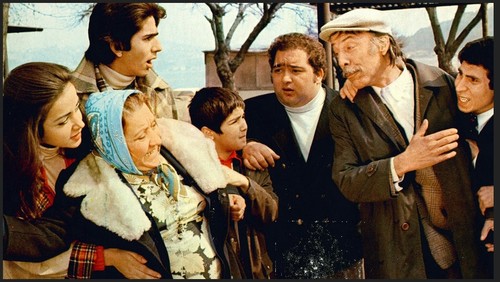 lymphoma, in "Canım Kardeşim" (My Beloved Brother, 1973). Though a great drama, "Canım Kardeşim" was a disaster at the box-office. Tarık Akan explained this as follows: "The audience could not bear such a tragic story since they were accustomed to comedy films by us."

After "Canım Kardeşim," Naşit played in family comedy-dramas directed and/or produced by Ertem Eğilmez. She was "Hafize Ana" (Mother Hafize) in "Hababam Sınıfı" (The Class of Chaos) series, which brought her great fame. People knew her as the "Mother Hafize" with a golden heart.Realizing the sympathy between the audience and Adile Naşit, Eğilmez enhanced her position in comedy-dramas. She took the leading female actor roles in such great films as "Neşeli Günler" (Joyful Days), "Bizim Aile" (Our Family) and "Aile Şerefi" (Honor of the Family). These three are similar films, which the Turkish audience love to watch at every opportunity. All three were hits at the movie theaters and are still primetime hits on TV.

'Don't forget to drink your milk'

Adile Naşit started on a solo show for kids on TV in 1981, namely "Uykudan Önce" (Before Bedtime). The show was simple: She sat on a chair, told a bedtime story and gave some advice to the kids before they went to bed. We looked forward to her show. She addressed us with names. Every night millions of children waited for her to spell his or her name.

I think Naşit's success as a storyteller on TV came from the heart. She lost her only child, Ahmet when he was only sixteen, because of heart failure. This may have driven her to become the mother of every child in the country.

Adile Naşit received the Best Leading Female Actor Award in the Antalya Film Festival in 1976 for her role in "İşte Hayat" (That's the Life). She was selected as the "Mother of the Year" in 1985 thanks to her show on TV. She died on Dec. 11, 1987 of colon cancer.