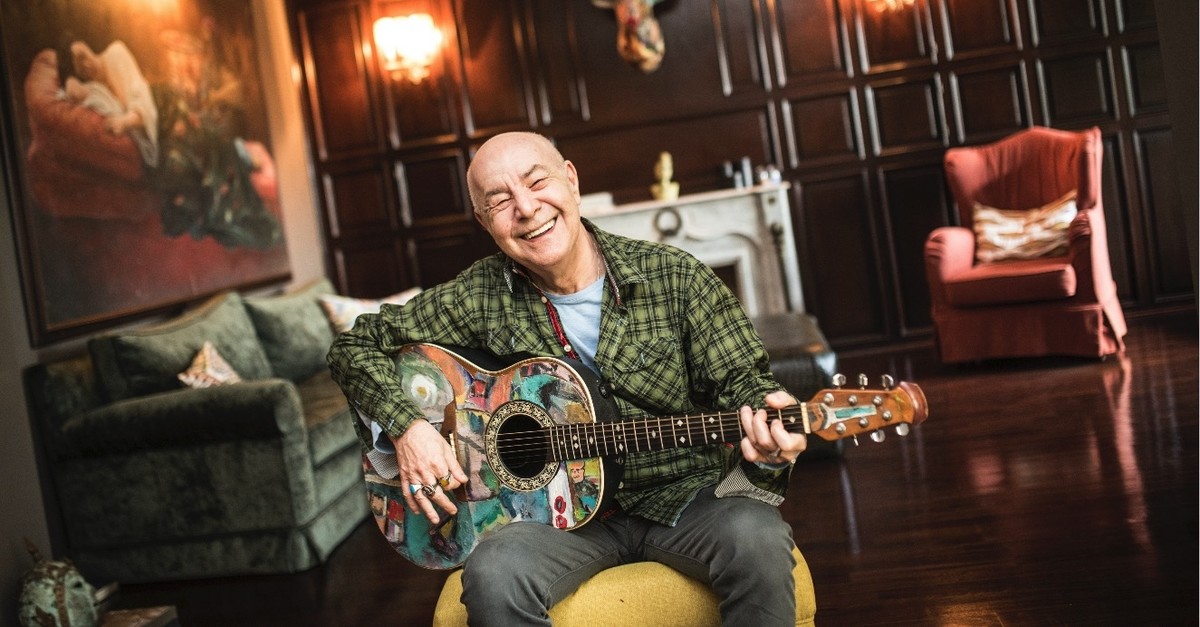 Mazhar Alanson has been much loved on the Turkish music scene since the 1970s with his various music projects. (Photo by Murat u015eengu00fcl)
by Hakan Arslanbenzer Apr 26, 2019 12:04 am

Having started his musical life in the psychedelic rock genre of the 1980s, Mazhar of the band MFÖ has greatly contributed to Turkish music to date, especially with the touch of Sufi references in his recent songs

The psychedelic revolution did not last long in Turkish music. After its blast in the second half of the 1960s, it gave birth to various genres including Anatolian rock, protest rock, some symphonic and progressive rock and finally pop rock. Anatolian rock has been received as the original Turkish rock genre, yet Turkish pop rock has also had its own to say.

Besides the great legendary groups and singers of Anatolian rock, there were many youngsters coming from more Westernized middle-class families and playing Western instruments with mixed tunes and chords. Some of them were mere imitators of European music bands, while many others tried to create their own sound.

Although the majority of the young bands of the 1960s and 1970s disappeared over time, a few survived the pop and arabesque contagions. I think the most successful band with psychedelic roots surviving the weird atmosphere of the 1980s is MFÖ - the initials of the band members, namely Mazhar, Fuat and Özkan. Like Sezen Aksu and İbrahim Tatlıses, the most popular singers of the 1980s, MFÖ also made some innovations and changes in their sound, inserting mostly funk and pop chords into their music, after their failed attempts in the 1970s, and thus became a daily dosage for young listeners. In the '80s, as the teenagers of that time, we were fond of playing and singing MFÖ songs on our own. If a friend could play the chord with an acoustic guitar, a dozen of us could sing "Güllerin içinden" ("Through the Roses") together. Though MFÖ consists of three musicians, Mazhar Alanson is thought to be the essence of the band since he also wrote the majority of their songs.

Mazhar Alanson was born on Feb. 13, 1950 in Ankara as the third child of a middle-class family. His father Ferruh was a trumpeter in the Presidency Symphonic Orchestra. His mother, Melek, was a primary school teacher, while her aunt Neriman Esi was an opera singer and her uncle Muammer Esi was a stage actor in the Ankara State Theater.

Alanson lost his father when he was a student at the Yenişehir College of the Turkish Education Association (TED). The Alanson family moved to Istanbul after the death of his father, and Mazhar enrolled at the Istanbul Maarif College (now Kadıköy Anatolian High School). After graduating from the high school, Alanson returned to Ankara for the State Conservatory. He was enrolled at the Theater Department of the conservatory. After graduation, Alanson began acting in State Theater plays in Ankara. From 1971 to 1979, he played in dozen of plays.

Though he was now a professional stage actor, Alanson showed great enthusiasm in psychedelic rock. In fact, he had an amateur band with Fuat Güner, whom he met in Istanbul in 1966. The "MF" or "Kaygısızlar" (Carefrees) gave rock concerts in Istanbul, and they played with Barış Manço as well. They made some 45's until 1971, when they decided to write a real song of their own. So, "Diloy," a psychedelic interpretation of a Turkish folk song, came to light in 1971. Mazhar and Fuat met the "Ö" of their future band "MFÖ," Özkan Uğur, the same year.

Mazhar and Fuat sang mostly in English until they were convinced by their record company to sing in Turkish after the dissolution of "Kaygısızlar" and formation of the new band, namely "Mazhar and Fuat." At that time, both were public servants. Fuat Güner worked at the Highways Department, while Mazhar Alanson was an actor at the Ankara State Theater. Mazhar and Fuat made some 45's and an LP named "Türküz Türkü Çağırırız" ("We Are Turks, We Sing Turkish Folk Songs") in 1973. Hale Alanson, Mazhar's wife at that time, also sang two songs on the LP. They wrote the songs for "Türküz Türkü Çağırırız" on a boat trip. They sang some of their songs in a TV show at the TRT studio in Ankara. Hey magazine listed the LP among the top 10 of the year. "Mazhar and Fuat" were also listed among the top five bands of the year. However, the debut album of "Mazhar and Fuat" did not yield much success. They couldn't sell enough to become full-time professionals.

After Fuat completed his military service, they formed another band named "İpek Beşlisi" (Silk Quintette), which also failed. After that, they dissolved the Silk Quintette and continued as a duo. They made a song for Bodrum, which is among the best Turkish songs written for a place, and sang it on a live TRT show in 1978. They began to play with prominent singers such as Ajda Pekkan, Sezen Aksu and Seyyal Taner, who were backed by the state television station TRT.

Mazhar and Fuat formed a new band with Özkan Uğur, and the trio picked the name MFÖ. The debut album of MFÖ, "Ele Güne Karşı Yapayalnız" ("Like a Shag on a Rock") released in 1984, was a success. The album's namesake song is a combination of Turkish psychedelic folk and funk, which lies behind the success of MFÖ. The lyrics are also touching and could be sung softly alone or loudly with a chorus. This diversity is characteristic of MFÖ songs. There is also a chorus part even in the very soft songs sung by Mazhar only.

MFÖ produced albums nearly every year in the second part of the 1980s. At the end of the decade, they were the most popular music band for all genres. The youth of the 1980s carried them to the Eurovision Song Contest, which was a matter of national pride for the Turkish people at that time. MFÖ sang "Didai Didai Didai" for the 1986 Eurovision contest. Turkish people hoped for a win; yet, they couldn't bring it home. Turgut Özal, the prime minister at that time, said, "By this, we learned that Eurovision is biased." MFÖ represented Turkey in Eurovision once more in 1988, which again yielded nothing.

MFÖ made its best album in 1994, which was the year of Turkish pop rock's best albums forever. "M.V.A.B." which meant "Mazeretim Var Asabiyim Ben" ("I Have Justification, I'm Cranky") includes mature songs with some religious and folkloric themes. The song "Allah Allah" especially drew attention since it was a Sufi poem and prayer.

Mazhar's Sufism has been discussed many times. Some people criticized him by being an obscurantist, which contradicts his modern lifestyle. He is a member of the Cerrahi Sufi order, which is popular among rich or famous people with modern lives.

Indeed, Mazhar Alanson made many funky religious songs. "Sufi Sufi," the second Eurovision song of the band, is a disco piece. "Ateş-i Aşk" ("Fire of Love") is a modern prayer again, while "Yandım" ("I Was Burnt Out") is an homage to the Prophet Muhammad.

Mazhar Alanson was married to Hale Alanson for 30 years until their divorce in 2002. They have two children. He married Biricik Suden in 2003.

Alanson played roles in many films; however, his role in "Her Şey Çok Güzel Olacak" ("Everything Will Be Fine") is the most well-loved one. Alanson is known for his witty, humorous character. He can be "cranky" sometimes as well. Once, in the 2004 Rock and Coke Festival, he fought with Iggy Pop and his crew. He said he broke Iggy's door because his technician played noisy music as Mazhar was playing on the stage. "I walked down, broke their door and swore at Iggy and the crew." When Mazhar was singing "Yandım" ("I Was Burnt") on stage, Iggy Pop asked his crew to try to silence him, and they made noise. If they knew Mazhar well, they wouldn't have done it.