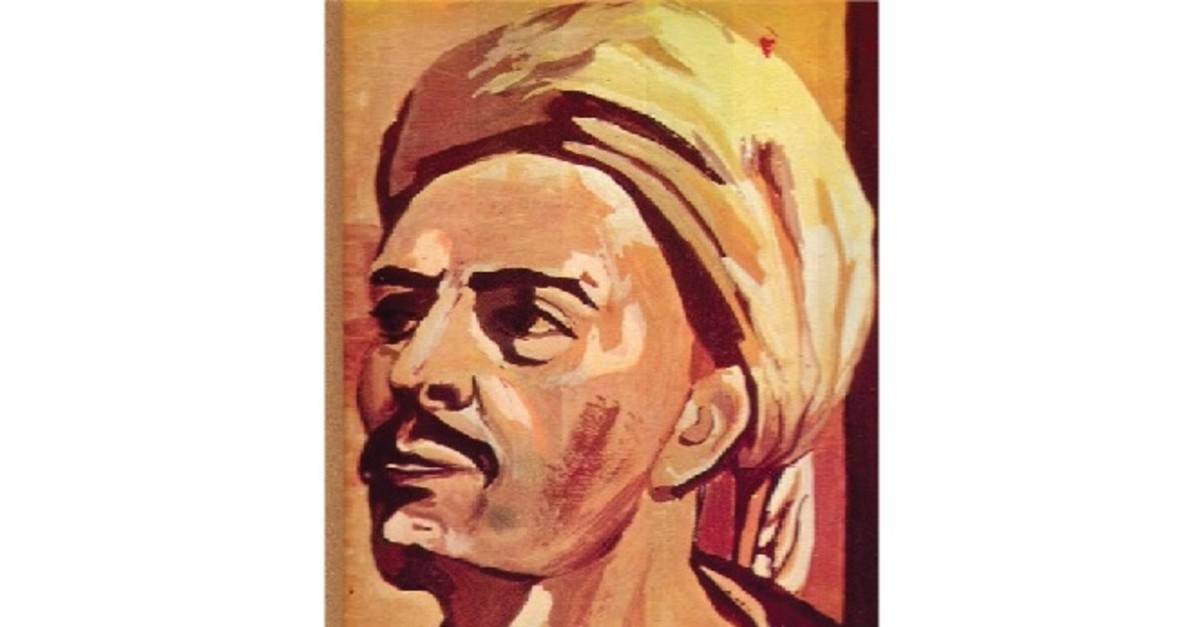 Since he lived in the 13th century, it is not known what Yunus Emre looked like but the photo shows a widely used depiction of his face.
by Hakan Arslanbenzer May 03, 2019 12:28 am

Probably the most famous figure of Turkish oral literature, Yunus Emre was also one of the earliest-known representatives of Turkish humanism

Written Turkish is respectively young compared to the oral tradition of Turks that dates back millennia. Speculation surrounds the origin of Turkish as a language and its literature; however, anyone interested in the history of languages has come across the uninterrupted use of Anatolian Turkish in both oral and written forms. Spoken and written modern Turkish stems from the dialects of the Oghuz and Kipchak tribes, who arrived in Anatolia early in the ninth century; a migration that was crowned by the conquest of Anatolia by the great Seljuk Empire in the 11th century.

Although an early dialect of modern Turkish was commonly spoken among the Seljuk army and in court as well as in schools and marketplaces of cities conquered or established by the Seljuks, the official written languages were Persian for literature and royal communications and Arabic for the sciences.

The rooted traditions of the above-mentioned languages had already begun to have a great impact on Turkish. The early written sources of Eastern Turkish, or the Karakhanid dialect, reflect the influence of Islam in Turkish through the Persian and Arabic effects.

Though the Karakhanids developed their own written dialect through acculturation into comparatively older Islamic traditions, Oghuzs waited a few centuries to invent their individual written Turkish branch in Anatolia. In the 13th century, mostly depending on the split between the Great Seljuk Empire and the Anatolian Seljuk state, the Anatolian beyliks began to encourage the use of Turkish as a formal language rather than Persian, which was thought as a symbol of their cousins in the East.

Nevertheless, there is still speculation about the start of written Turkish in Anatolia. Mikail Bayram, a prominent historian of Seljuk Turkey, proposes Hakim Bereket's medical translations as the first written forms of Turkish in Anatolia, which date back to the early 13th century. On the other hand, literary historians accept different pieces as the initial examples of written Turkish.

Whatever the case, Turkish had a long journey. The 13th and 14th centuries would become the cradle of classic Turkish language and literature, rising in the dawn of the 15th century, or the second coming of the Ottoman state after the second Mongol invasion of Anatolia under Tamerlane command.

One of the 13th century poets, about whom historians have only collected very little and poor evidence, Yunus Emre has become one of the historical milestones of the so-called Turkish humanism since Şinasi and Namık Kemal, two major poets of the Tanzimat era, showed special interest in Yunus Emre's poems, which had been ignored by classical literary circles because of their folkloric appearance.

The first author to put Yunus Emre in a preeminent place in the history of Turkish language and literature was Mehmet Fuad Köprülü, the founder of modern Turkish historiography. Köprülü thought of Yunus Emre as a pioneer of the secular worldview since he was a Sufi and a poet, who had written many lines against the Sharia and the Hodja.

This was strange in all aspects. Yunus Emre's name was unknown to history books. Yet, there were many copies of his poems, which could have not been edited thoroughly so far because of some textual and stylistic difficulties. Besides, his name was seen on Sufi tales. Until now, Yunus Emre has been portrayed as a mythical figure coming out of these irrational tales. Sufi's tales, or "menakıb," literally meaning "saga," have been shamefully used as historical resources.

According to the aforementioned sagas, Yunus Emre lived in many places at the same time. He was a qadi schooled in the madrasa in Konya, while he was also an illiterate and poor villager in Eskişehir.

Furthermore, poems attributed to him under such names as Yunus Emre, Miskin Yunus and Aşık Yunus vary in style and meaning. Some of his poems show him as a religious Sunni Sufi, while some others apparently are out of any Sunni understanding of God, creation, morals and man.

And as for his life, we really know nearly nothing. Sufi and secular historians have had a mutual understanding about his birth year, 1240, which is accepted as the official or stately birth year of the poet; thus, the state and universities hold many events to celebrate centenaries of Yunus Emre's birth year, which is indeed unknown.

The obvious without a name

The only thing we can be certain about Yunus Emre is that he wrote poems, and these are folkloric Sufi poems written in 13th century Turkish. Though the earliest manuscripts of his diwan dates back to the end of the 15th century, we know that his poems are much older than that.

Yunus Emre's personality as a poet and a Sufi is believed to be one of the early examples of Turkish humanism. His sayings about peace, love, friendship and renouncing of earthly desires have been used as flags of literary tourism, while his apparently dissident attitude against the formal religious rites have been seen as historical proof that Turks have always had something secular in their souls - a point of view that shows obvious anachronism.

Yunus Emre's Turkish is understandable today in spite of the time gap since it has a very small amount of Arabic and Persian words. The only problem is that he uses some very old Turkish words that are no longer used. This problem is remedied through the removal of the dead words and replacing them with newer words instead in popular publications. Indeed, nine of 10 Yunus Emre publications do not reflect the complete form of his poems in the real historical manuscripts. Moreover, these manuscripts include very different poems or different forms of the same poems.

However, a bunch of his poems are widely known by many people. Perhaps the most famous of his poems reads as follows:

"I haven't come here to settle down.

I am a merchant with lots of goods,

Selling to whoever will buy.

I didn't come to create any problems,

Yunus Emre is a common name for schools, cultural centers, neighborhoods and streets in Turkey as a part of cultural legacy. The Yunus Emre Institute was created in his name to teach Turkish abroad. UNESCO declared the year 1991 as the "Yunus Emre Year of Love."