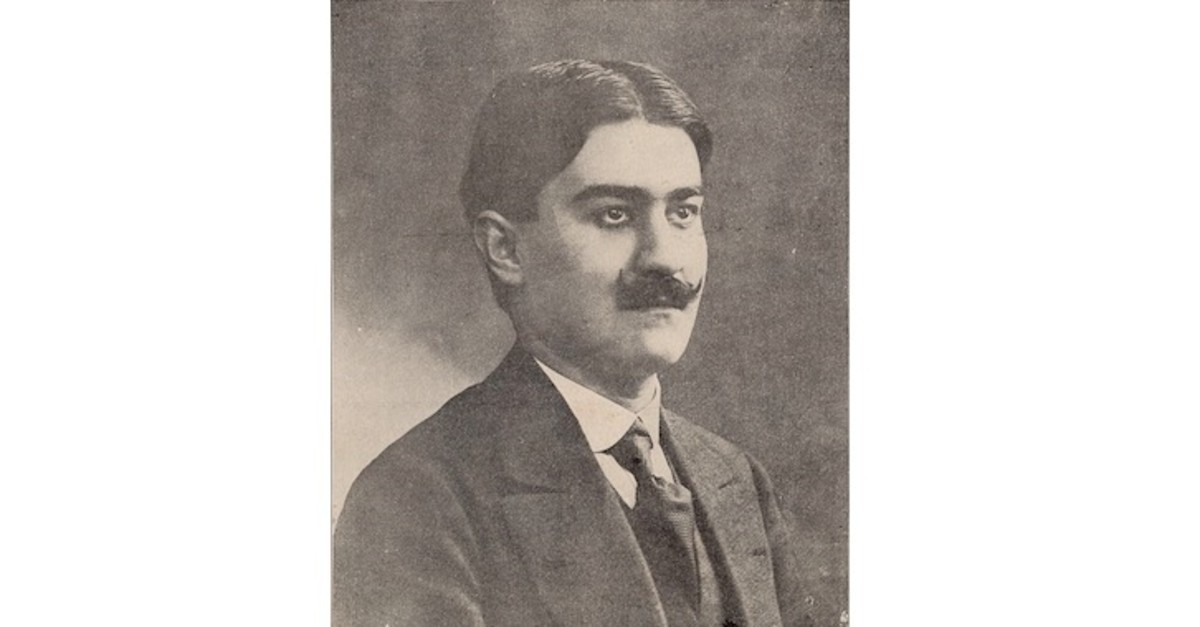 An atheist and unbeliever in regards to Islam, Baha Tevfik believed in materialist philosophy, which he thought was the true reason for the victory of the West against the East.
by Hakan Arslanbenzer May 17, 2019 12:06 am

Having lived from 1884 to 1914, Baha Tevfik was an intellectual who dealt with philosophy, who suggested the adoption of European individualism and materialism, as well as being a radical anarchist defending the destruction of any and all legacy of Turkish and Islamic traditions

However, the terms "anarchism" and "anarchist" in police records should not be taken as the exact proof for the number of political dissidents believing in and acting for anarchism as a philosophical and political movement. Some of these "anarchists" chased by the police could have been socialists and minority nationalists. Whatever the situation was, Muslim Ottomans were not in the center of anarchist actions and anarchism as a political movement during the last decades of the Ottoman State.

On the other hand, we have enough written proof to believe that there were peaceful anarchists, too, especially among the Muslim Ottomans. Besides such ideas and movements with apparently European origins as nationalism, socialism, libertarianism, positivism and naturalism, anarchism also arose within the Ottoman intelligentsia during the Constitutional era after the 1908 Revolution. After the Abdülhamid II government declared freedom and lifted the pressure on the press, Ottoman intellectuals found an opportunity to express their political thoughts by press. Baha Tevfik might have been the most radical Ottoman intellectual dealing with philosophy at that time, because he refused anything coming past of Ottoman thought and stood for acceptance of individualism and materialism of Europe, philosophies which were taboo even after 1908. Despite his peers, Baha Tevfik never compromised his radicalism and defended the destruction of any and all legacy of Turkish and Islamic traditions.

Baha Tevfik was born on April 13, 1884 in İzmir. He was first schooled at the Namazgah Elementary School in İzmir. After that he graduated from the İzmir Rüşdiyesi (Secondary School) and İzmir İdadisi (High School). He enrolled at the Mülkiye Mektebi (School of Political Sciences) in Istanbul, from where he graduated in 1907, one year before the Young Turk revolution.

Baha Tevfik read Western philosophy during his high school years thanks to his fluency in French. The works of Kant, Tolstoy and Nietzsche influenced him. However, the author impacting the Young Turk was Louis Buchner. Under the effect of Buchner's "Force and Matter," Baha Tevfik became an atheist and a materialist. He wouldn't believe in God, religion and fate for the rest of his short life, which gave him a peculiar stance among the Ottoman intellectuals, who believed in God in some way.

After the 1908 revolution, Baha Tevfik worked as a school principal and then as a clerk at the governor's office in İzmir. He also worked at the department of writings for the Meclis-i Ayan (Assembly of Notables) in Istanbul. Yet, he quit government in order to publish his ideas via press, which was prohibited for public servants. He worked as a philosophy teacher at the Rehber-i İttihad-i Osmani Mektebi (Guide for Ottoman Union School) until his death in 1914.

An atheist and unbeliever in regards to Islam, Baha Tevfik believed in materialist philosophy, which he thought was the true reason for the victory of the West against the East. After the March 31 incident, he moved to Istanbul to establish a periodical and a publishing house with his friends in order to propagate his materialistic ideas. Philosophy meant everything to Baha Tevfik. He believed that the superiority of Europe was essential and coming from the thick philosophical tradition beginning with the ancient Greeks. He thought philosophy created the basis and horizons for science. Therefore, we should take today's science as yesterday's philosophy; likewise, today's philosophy will become tomorrow's science.

Baha Tevfik attacked every convention of Ottoman intellectuals. He wrote strong polemics against celebrity authors such as Rıza Tevfik and Filibeli Ahmed Hilmi, who had gained fame as philosophers. He thought they had nothing in philosophy, because they were not disciples of the Western philosophers like Kant, Buchner and Nietzsche. Both Rıza Tevfik and Filibeli Ahmed Hilmi brought many of their thoughts from the Islamic tradition, which was a severe crime for the young atheist.

Unlike his peers, Baha Tevfik did not offer a social philosophy for the solution of social questions. He declared war against the old values including Islamic rules, Ottoman way of life and Turkish tradition. He defended a sharp-ended individualism, which was depended on a materialistic understanding of logic and ethics. Like his master Nietzsche, Baha Tevfik, too, found the moral tradition guilty of evil in society. The good, in Baha Tevfik's strange philosophy, should come from right thinking, which also depended on logic. Morals were dead conventions to him. Ethics, he suggested, should not deal with abstract good, but try to create ways of right deeds. He insisted on the education of the individual will, which was the assignment of philosophy itself.

Though some sociologists did not think that Baha Tevfik was a true anarchist, his understanding of individual philosophy carried his thoughts into a kind of peaceful anarchist utopia, where there would be no trace of the obligations and coercions of power. But free and logical persons would do well for the sake of their own needs, which was a libertarian and utopian understanding of ethics.

Indeed, Baha Tevfik did nothing that could be taken as anarchist political actions. His war against the establishment was only in writing, and he showed no interest in any reactionary organizations.

However, he supported anarchism against socialism in his masterpiece, "Felsefe-i Ferd" ("The Philosophy of the Individual"), where he stated that anarchism did not welcome anything but nature itself over the rights of the individual, which was the opposite of socialism. Baha Tevfik believed that humanity would walk through anarchism rather than socialism. "But," he added, "this will be a scientific anarchism, and it will choose to build things rather than destroy them."

At the age of 30, Baha Tevfik died of appendicitis on May 15, 1914. He is buried in Karacaahmet Cemetery.