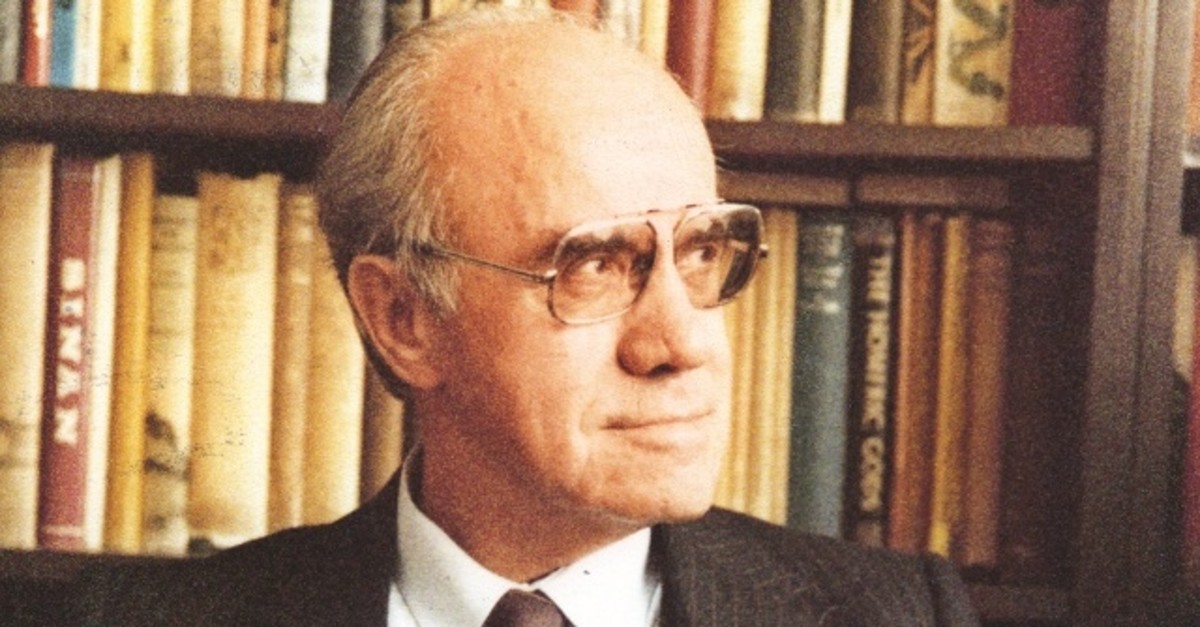 Mehmet Kaplan taught generations at the Turkish Language and Literature Department.
by Hakan Arslanbenzer May 24, 2019 12:04 am

The history of Turkish literature dates back to the eighth century. This, of course, applies to the history of written text. The oral tradition of the Turkish language is dateless and goes back to the proto-Turkish era, which is estimated to have begun approximately 2,500 years ago. However, the study of the Turkish language and literature is much younger than the oral and written traditions. The first Turkish dictionary, Mahmoud of Kashgar's "Diwan Lughat al-Turk," was written between 1072 and 1074. Mahmoud's book was intended for use by the caliphs of Baghdad, who were actually under the political control of the Seljuk dynasty. In other words, the military and political power of the Seljuk Empire provided the Turkish language scholarly significance. After the triumph of the Seljuks, both Turkish written literature and literary studies became a part of Islamic high culture.

While imperial Turkish literary texts enjoyed classical Islamic epistemology, ethics and aesthetics under Seljuk and Ottoman rule, the modern literary movements brought newer things from Europe. Thus, the study of literature now required a new understanding of the trio of epistemology, ethics and aesthetics. After Namık Kemal's initiatives to renew literary aesthetics by combining European influences with classic Ottoman artistic knowledge, his disciples also contributed to the new science of literature by writing numerous textbooks and critiques on rhetoric, aesthetics and linguistics.

When the rulers of the Turkish Republic decided to throw away the old tradition and establish a new university on ground zero, the study of Turkish literature became a new task, as well. Yet, unlike such humanistic departments as philosophy, philology and archaeology, departments of Turkish language and literature were founded on the narrow tradition of late Ottoman literary understanding. The department has been active since 1865 and survived the 1933 University Reform, which destroyed many lecturing positions at the old Darülfünun (Faculty of Arts after 1933), thanks to the chairmanship of Mehmet Fuad Köprülü, who was close to the government.

On the other hand, the renovation of the literature department was delayed by the aforementioned survival since the senior professors of the department were studying the classics. The first Ph.D. dissertation was in 1944 by a young scholar, Mehmet Kaplan, who would become the professor of professors in modern Turkish studies. Kaplan is the first scholar of Turkish literature who produced contextual literary criticism rather than the biography-centered criticism, which was the previous tradition of Turkish studies.

Mehmet Kaplan was born on March 15, 1915 in Sivrihisar, Eskişehir. He was first schooled in Sivrihisar before he graduated from secondary and high school in Eskişehir. Kaplan's father was a shoemaker in Sivrihisar and described as "a man with no success in life" by his son. They moved to Eskişehir in 1928 after his father's business collapsed. The family built a house near Porsuk river in Eskişehir and established roots there.

Kaplan's family lived in poverty, so he had to help his parents by selling small things after school. He used to sell ayran, a salty Turkish drink made with yogurt, to train passengers at Eskişehir Station, which was near the family's home.

Kaplan found sanctuary at the library in his school years. He liked to read, and he read books on philosophy, sociology and psychology on top of the usual literary books. This early cognitive interest in social sciences would be reflected in his style of literary criticism relying vastly on psychology and sociology.

Kaplan scored well on the exam for the Military School of Medicine, though his teacher Cemal Duru made him enroll at the Institute for Teachers. In fact, Kaplan was fond of literature and wrote amateur poems and short stories during high school years.

After spending one year in Germany to learn German and study criticism at a German college, Kaplan graduated from the Institute for Teachers and the Literature Department of Istanbul University and began to work as a research assistant under the supervision of Mehmet Fuad Köprülü. However, his real mentor was Ahmet Hamdi Tanpınar, to whom he paid homage to for the rest of his life. In 1939, as Köprülü decided to leave the university for the sake of politics, Kaplan became the assistant of his real mentor, Tanpınar.

Tanpınar was a not only a young professor at the university, but he was also one of the pioneers of modernist Turkish literature and a loyal disciple of Yahya Kemal, a Baudelairian poet of the modern Turkish era. Tanpınar was more knowledgeable about Western literature and criticism than Turkish classics. He was a master at criticizing texts by giving them cultural contexts. He taught inter-textual comparison to his students, including Mehmet Kaplan. He also taught many people through his articles on classical and modern Turkish literature written in a personal kind of hermeneutics.

Initially supervised by Köprülü and mentored by Tanpınar, giants of Turkish literary study, Kaplan gave the first ever Ph.D. dissertation on Turkish literature at the new Department of Turkish Language and Literature in 1944, which was an argument on Namık Kemal's initiative as a modern author in Turkish.

Kaplan received the rank of assistant professor in 1949 and full professor in 1953. After that, he worked as the founding dean of Erzurum Atatürk University's Department of Literature from 1958 to 1960. He chaired Istanbul University's Department of Literature from 1982 until his retirement in 1984. He lectured graduate and Ph.D. students at the department until his death in 1986.

Mehmet Kaplan visited European universities on special occasions as a researcher and lecturer. He chaired the Research Institute of Turkology and was a member of the Atatürk Turkish History and Language High Council. He also worked as a member in language and literature commissions assigned by various ministries.

Kaplan taught generations at the Turkish Language and Literature Department. He was a professor for many people who went on to work as professors in the language, literature and folklore departments of various universities.

Kaplan's significance comes from two things, I believe. One, he started, continued and mastered text-centered criticism dependent on scientific data from humanities like sociology, social psychology and psychology, which is best reflected on his legendary work on Tevfik Fikret, a controversial poet of the Abdülhamid II period. He interpreted the crisis of modern Turkish literature as a crisis of civilization, which meant that Turkish literature reflected the anomies of the passage to the Western civilization circle from Islamic traditions. His "Şiir Tahlilleri" ("Poetic Analyses") and "Tip Tahlilleri" ("Analyses on Fiction") have been used as textbooks in language and literature departments.