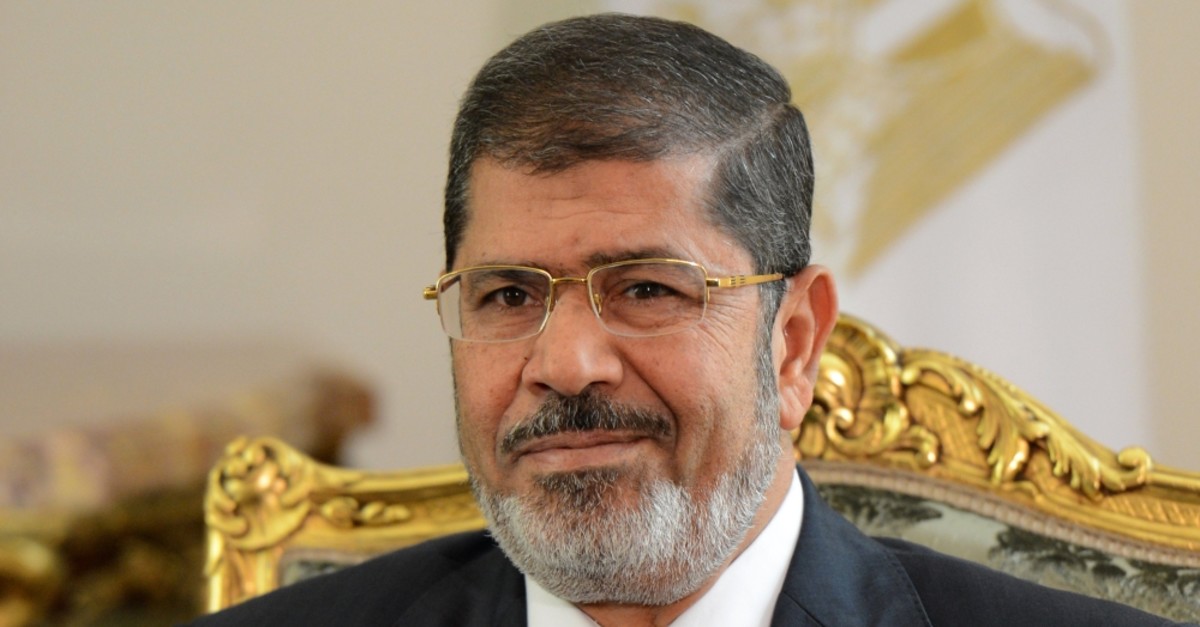 As a cultivated member of the Muslim Brotherhood, Mohammed Morsi stood as the first democratically-elected leader of Egypt.
by Hakan Arslanbenzer Jun 21, 2019 12:18 am

Egypt's ousted president, a member of the Muslim Brotherhood, was a glimmer of hope for the democratic future of the country. His dramatic death in a Cairo courtroom will never be forgotten

Few rulers in history have presented themselves as gods. The best examples were the pharaohs of ancient Egypt, which was home to the most sophisticated civilization of its era. For about 3,000 years, pharaohs ruled the fertile Nile basin pretending to be sacred kings. Dynasty after dynasty, king after king, the status quo never changed in Egypt until the military chiefs of the imperialist period gained some significance.

In Egypt's history, ancient or modern, military chiefs as well as the men of God have always had a say in politics. Since Alexander the Great's invasion of Egypt, armies and clergymen have stood side by side. Sometimes, they collaborated to perpetuate the status quo. However, in numerous occasions throughout history, religious scholars and philosophers have been detained, tortured and even killed. Whenever a man of piety, a Moses against the pharaoh, threatened the status quo of the terrestrial "gods" in Egypt, the hierarchical system always found a way to oust him through methods such as exile, imprisonment or execution.

Modern Egyptian history is no different. After the "Free Officers" movement overthrew King Farouk, Egypt has been ruled by military pharaohs. From 1953 to 2012, four military chiefs, namely Mohammed Nagib, Gamal Abd al-Nasser, Anwar al-Sadat and Hosni Mubarek, ruled the country pretending to be gods in human bodies. When the Arab Spring began in 2011 and heavy protests in Cairo and elsewhere targeted Mubarek's 30 years of severe rule, everybody waited for the decision of the army chiefs, who ended up not backing the old tyrant, and he fell.

While most thought Egyptians really "did it" and that the country's democratic path could not be reversed, the army took an ambiguous position on the political situation, which held the door open for free elections for the first time in Egypt's history. When Mohammed Morsi was elected as the fifth, democratically the first, president of Egypt, many commentators were speaking about the Tahrir protests that helped overthrow Mubarek as the first phase of a possible democratic revolution in the Arab world. Unfortunately, the Arab Spring was suppressed again by a martial act, and the first democratically elected president of Egypt, who died suspiciously in court on June 17, 2019, was imprisoned for the sake of a junta rule headed by Abdel-Fattah el-Sissi, who was appointed as the chief of military staff by Morsi.

A member of the Muslim Brotherhood

Like many of his cultivated peers, Morsi was a member of the Muslim Brotherhood. He joined the brotherhood in 1977 and received duties beginning in 1979. He crossed over to the political wing of the movement and rose through the ranks. He was elected to the Youth Committee in 1995. In 2000, he was elected to the People's Assembly, where he held his seat independently since the Muslim Brotherhood was politically banned in Egypt.

During his term in Parliament, Morsi pressed the government for political reforms, including the lifting of oppressive measures that gave police abnormal authority to detain, arrest and interrogate anyone they wished. Morsi was an active politician in the assembly and introduced himself as a social conservative. He acted as the spokesman of the Muslim Brotherhood in the People's Assembly. Morsi lost his seat in the assembly after the 2005 elections since the Mubarak administration used electoral fraud to reverse the Muslim Brotherhood's gains in the previous elections. After that, he was appointed to the Guidance Bureau, the highest executive body of the Muslim Brotherhood organization. He joined protests in 2006 and 2011, for which he was arrested and spent more than seven months in the jail.

After Mubarak was ousted, members of the Muslim Brotherhood entered the open political arena as legitimate actors. They formed the Freedom and Justice Party and selected Morsi as their presidential candidate after Khayrat al-Shater, the original candidate, was disqualified from running. He defeated his rivals in both rounds of the presidential elections and was elected as the first democratic president of Egypt on June 17, 2012.

However, he took on the presidency under problematic circumstances since the Supreme Constitutional Court dissolved the People's Assembly led by the Muslim Brotherhood, and the interim military government made a constitutional declaration, both of which limited Morsi's authority as a president from the start.

Morsi tried to use his legitimate power and preserve political strength through progressive moves. He forced seven members of the military council to retire and helped establish a cease-fire between Israel and Hamas. After that, he removed the authority of the Supreme Court over the presidency and the Constituent Assembly until a permanent constitution was created and enacted. In other words, he tried to establish the superiority of the presidency over the military and the judiciary. Though Morsi thought this move would help Egypt's transition to a powerful democracy, mass demonstrations were held against his decisions.

Moses against the pharaoh

Meanwhile, the Christian and secularist members of the Constituent Assembly began boycotting, and both Morsi opponents and supporters held massive rallies in different squares in Cairo. Tahrir was the usual place for the opponents, while Rabia Square became the sign of the people rallying to support the president. The constitutional referendum and the approval of the draft constitution by the voters did not help ease the severity of the situation.

On July 1, 2013, el-Sissi, the head of the Egyptian armed forces, declared that the army was ready to intervene. Just two days later, el-Sissi led a military coup, arrested Morsi and killed 3,533 of his supporters and arrested myriads of others. El-Sissi outlawed the Muslim Brotherhood once again. The courts gave numerous death penalties to young members of the Brotherhood, and many of them were executed immediately.

Mohammed Morsi was sentenced to death in 2015, which was overturned by another court in 2016. The court ordered a retrial. Unfortunately, the el-Sissi junta administration treated Morsi harshly in prison. He was never allowed to have proper healthcare, of which he was in dire need. Besides, there are also allegations that the junta gave him poison to cause a slow death instead of the death penalty, which they thought would influence the public to portray Morsi as a hero. Yet, his attitude as a political prisoner was always heroic. As a cultivated member of the Muslim Brotherhood, Morsi never allowed his opponents to place him in an inferior position. He always stood as the leader of a suffering nation and for the people's rights. Mohammed Morsi died on June 17, 2019 under suspicious circumstances. The junta declared that he collapsed in court and soon died at the hospital, which leaves opaque questions about his death.