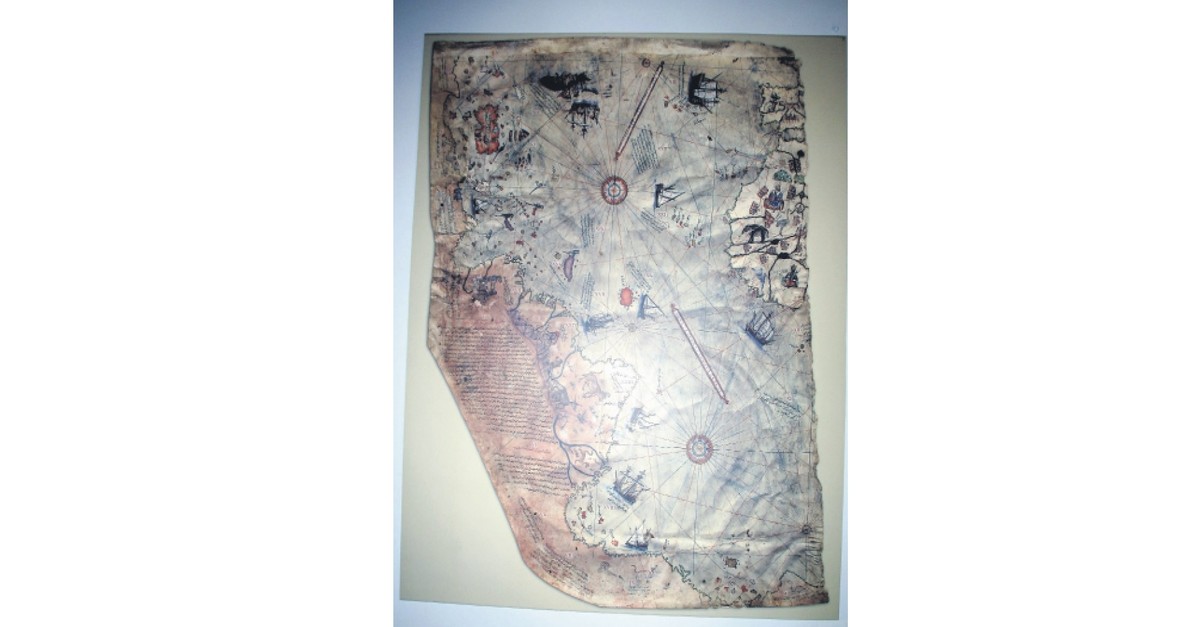 Primarily known for his maps and accepted today as a pioneering cartographer, Piri Reis was also an Ottoman geographer and navigator who collected his experiences on the sea in ‘Kitab-ı Bahriye'

After the conquest of Constantinople, the Ottoman State became a world empire. The rule for being a world empire in the 15th century was to control the Mediterranean both for military and commercial purposes. Indeed, Turkish sea power in the Mediterranean preceded the Ottomans. In the 14th century, various beyliks (principalities) residing on the Aegean coast of Anatolia had already limited Byzantine naval activities, leaving enough room for the Muslim Turks to utilize the benefits of the sea in friendly or hostile ways.

When Mehmed II, aka Mehmed the Conqueror, took Constantinople, he also transformed the Ottoman navy from a modest fleet to a strategic sea power including a huge fleet equipped with fire guns. He built the large royal navy yard called "Tersane-i Amire" in Kasımpaşa at the Golden Horn in Istanbul, which would serve the Ottoman navy for centuries. Mehmed II conquered all strategic points of the Marmara and the Black Sea before turning toward the Mediterranean, which would soon become a "Turkish lake."

What the Ottomans needed for the conquest of seas was information and strategy, because they already had the greatest military and navy in the world. Power combined with strategy attracts information; thus, the Ottoman State became one of the centers of navigation, geography and cartography. Many books and maps were made throughout the years; but one figure, namely Piri Reis, was distinguished for his scientific efforts in mapping. Piri Reis was the first navigator ever to compile a map of the world.

Born to the sea

Piri Reis was born as Ahmed Muhiddin Piri bin Hacı Mehmed in Gallipoli around 1470. "Reis" is not a part of his real name but a title given to sea captains, military or civilian. The "Hacı" addition to his and his father's name shows that both completed their religious pilgrimage to Mecca in Hejaz. Our knowledge about his personal life depends mainly on the "Kitab-ı Bahriye" ("Book of Navigation"), which he completed and presented to the Sultan Suleiman the Magnificent in 1526.

According to his own notes, Piri accompanied his uncle Kemal Reis, one of the greatest Ottoman sea captains, in the privateering business in the Mediterranean before he came into state service. Kemal and Piri together acted as corsairs along Venetian and other European coasts. Once, the two seized three trade ships, called barça, near the islands next to Toulon and sold them in Tunis in order to buy a sea castle near the Mallorca island. They also continued their business in Sicily, Malta and the Spanish coasts.

Kemal Reis was famous for his generous and brave help to the Andalucian Muslims, who asked the Ottomans for assistance because of the cruel Christian rule in Spain. Kemal Reis took many of them to Tunis, gaining the name of "the father of the refugees." Piri was with his uncle during all of these rescue operations.

Piri Reis sailed extensively in the Mediterranean. He tells in the "Kitab-ı Bahriyye" that he and his uncle visited some North African Muslim emirs at their residences. Piri learned much about the Mediterranean coasts, both European and African.

Piri and Kemal ended their privateering business in about 1495, when they became Ottoman sea officers upon invitation of the sultan himself, Bayezid II, son of Mehmed II. Piri accompanied his uncle at his reception before the sultan in Istanbul. Kemal Reis became a navy admiral, while his nephew became the captain of a ship in his fleet. Piri participated in many sea battles with the Christian corsairs at Rodos, Lepanto, Methone, Pilos and Koron. Kemal conquered many Venetian castles in Mora.

Piri was a member of the diplomatic council sent to the Mamluk sultan in order to provide peace for the Muslim sea trade. In 1504, he helped his uncle rescue the Muslim prisoners in Rodos. Kemal and Piri also helped the Mamluks against the Portuguese. Kemal Reis died in 1510, turning a new page in Piri's life.

Piri Reis compiled his first world map in 1513. He submitted the piece, which was the first world map ever drawn, to Selim I, aka Selim the Resolute. A small part of this map was discovered in 1929 at Topkapı Palace in Istanbul. Piri's first world map is centered on the Sahara desert at the latitude of the Tropic of Cancer. It shows the Americas beside the Old World, including Eurasia, Asia Minor and North Africa.

Piri compiled a second world map in 1528 and submitted it to Suleiman the Magnificent. The map shows Greenland, North America, some parts of Central America and Cuba. Piri admitted that he used more than 20 maps, including that of Christopher Columbus, to create the comprehensive drawing.

Despite the fame of his world maps, the masterpiece of Piri Reis is the "Kitab-ı Bahriye," which includes information, charts and small maps about the whole Mediterranean region. It was a perfect guide for navigators in the 16th century.

Piri rose to the rank of Reis, namely admiral, in 1547. He commanded the Ottoman fleet in the Indian Ocean, his headquarters being in Egypt. He captured Aden and Muscat from the Portuguese in 1548 and 1552, respectively. After that, he captured Hormuz and entered the Persian Gulf. He also took control of Qatar and Bahrain. However, the Ottoman sailor-warriors were fatigued. Thinking this may result in a defeat against the Portuguese, Piri decided to retreat to Basra.

Eventually, he turned back to Cairo, which was not a move welcomed by the sultan and the state's high-ranking officials. Piri was thought to be a coward who left his men on the battlefield and ran. Because of this perception, he was executed in Cairo in 1554.