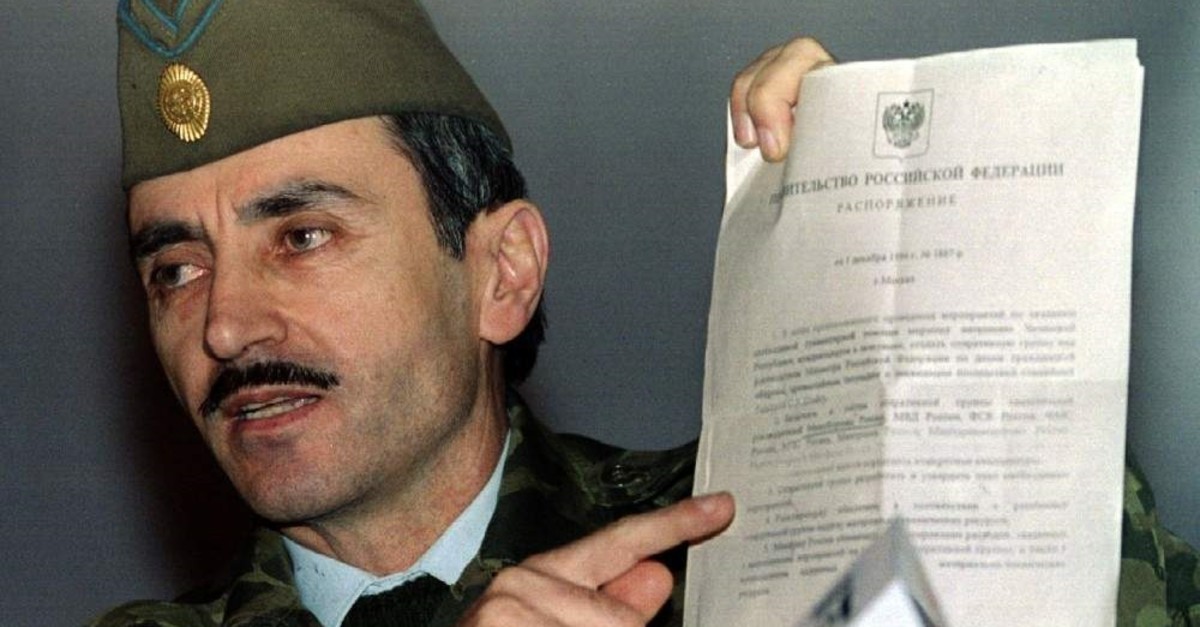 Dzokhar Dudayev presents a document to the press which he says proves Kremlin is planning to deport the Chechen population during a press conference in Grozny, Dec.15, xxxx.
by Hakan Arslanbenzer Nov 14, 2019 6:51 pm


When the Soviet Union collapsed and was officially disintegrated in December 1991, Russia faced the dissolution of its empire, which had ruled over a huge territory from East Europe to China, from the Baltic Sea to the Caspian Sea. Even before the disintegration, Eastern European satellites of the USSR had already broken the chains of the Soviet Empire and became integrated with the West. And after the disintegration, 14 former Soviet Republics declared national independence, which Russia admitted eventually. However, Russia itself had more than 20 “republics” inhabited mostly by non-Russians, which became a great question when the Chechens proclaimed their independence and threw off Russian rule in Chechnya.
Chechnya is a Muslim (Sunni) majority nation, which has continually fought against foreign rule since the 15th century. The Chechens converted to Islam at the beginning of the 15th century, while Islam has always been connected with the resistance against foreign invasion in the subconscious of Chechens.
The final episode of the Chechen freedom fights took place in the 1990s after the collapse of the Soviet Union. Indeed, the Chechen nation had already been waiting for an opportunity to seize their independence from the Russians, which the disintegration of the USSR gave to them. In 1991, they overthrew the Chechen-Ingush Republic and the All-National Congress of the Chechen People declared the sovereignty of the Chechen Republic of Ichkeria. Dzhokhar Musayevich Dudayev was elected the president of the new republic after a referendum held in October 1991. Dudayev led his nation until his death in 1996 under the difficult circumstances of a heavily asymmetrical war.
Early life
Dzhokhar Musayevich Dudayev was born Feb. 15, 1944 in Yalkhoroy village of the former Chechen-Ingush Autonomous Soviet Republic, one of the 22 federal subjects of the Russian Soviet Republic, just days before the forced deportation of his family among the huge Chechen and Ingush crowds by the order of Joseph Stalin, the cruel chief of the USSR. Dudayev was the 13th and youngest child of his parents, Musa and Rabiat Dudayev. He spent the first 13 years of his life in the internal exile in the Kazakh Soviet Republic with his family and other Chechen families together. They were only able to return to Chechnya in 1957.
Following their repatriation, Dudayev enrolled in evening school and became an electrician. He also studied electronics for two years before he was admitted at the Tambov Higher Military Aviation School for Pilots, where he graduated from in 1966. He joined the Communist Party in 1968 and studied at the Gagarin Air Force Academy in the early 1970s. Dudayev married Alla, a poet and the daughter of a Russian officer. Cahar and Alla had three children.
First Chechen general
Dudayev was the first-ever Chechen general in the Soviet military forces. Beginning with 1962, he gained rank after rank and became a major general eventually. He served in the Soviet-Afghan War, for which he was awarded several orders. It’s interesting that some of his former colleagues alleged that Dudayev personally joined in bombing operations against the Muslim Afghan warriors (the “mujahedeen”), although he was of a superior rank and did not have to. His Russian colleagues pointed to him as a “true comrade,” who showed no affection to his religious background. On the other hand, Dudayev denied such allegations, which makes more sense than the allegations themselves.
Dudayev was the garrison commander in Tartu when Estonia became free of the Soviet Union in 1990. He showed sympathy to Estonian independence and ignored such orders to shut down the Estonian television and parliament. After that, the Soviet air division withdrew from Estonia and Dudayev resigned from the Soviet armed forces and returned to Grozny.
President of free Chechnya
Dzhokhar Dudayev was elected president of free Chechnya in 1991. However, Russia refused to recognize the self-proclaimed independence of the Chechen Republic of Ichkeria, a unity of Chechnya and Ingushetia. Ichkeria split into two when Ingushetia left the union and decided to become a federal subject of Russia. Therefore, Dudayev declared the sovereignty of Chechnya in 1993, which triggered the Russian armed forces’ invasion and the start of the Russian-Chechen wars.
From 1994 until 1996, Dudayev led the Chechen freedom fighters against the enormous military might of Russian power. Meanwhile, the Chechen opposition backed by Russia tried to depose Dudayev by force, but failed in every one of their attempts.
In December 1994, Russia began bombing Grozny and Russian troops invaded Chechnya. Before the Russians captured Grozny, Dudayev left the city and gave his orders from a secret location next to Vedeno, the historical capital of Chechnya. In spite the fact that the Chechens had no chance against the conventional land and air power of the Russian armed forces, Dudayev ordered his troops to continue a guerilla war against Russia. It was a war between David and Goliath.
Dzhokhar Dudayev was killed by a Russian airstrike held on Apr. 21, 1996, when a reconnaissance aircraft tracked his satellite phone.
Dudayev’s name was honored after his death. Many countries including Estonia, Bosnia-Herzegovina, Turkey, Ukraine, Latvia, and Georgia named many public places after him. Chechnya renamed its capital Grozny “Cahar-Qala” after Dudayev, which was changed to Grozny again after the Second Chechen War. The Chechens do not generally use the name Grozny (which means “terrible” in Russian); instead, they prefer “Solzha-Qala,” meaning “the castle on the Sunzha River.”
One of Dudayev’s quotes says, “Every Chechen is a general. I am only the one million and first one.”
Last Update: Dec 20, 2019 1:41 am
RELATED TOPICS