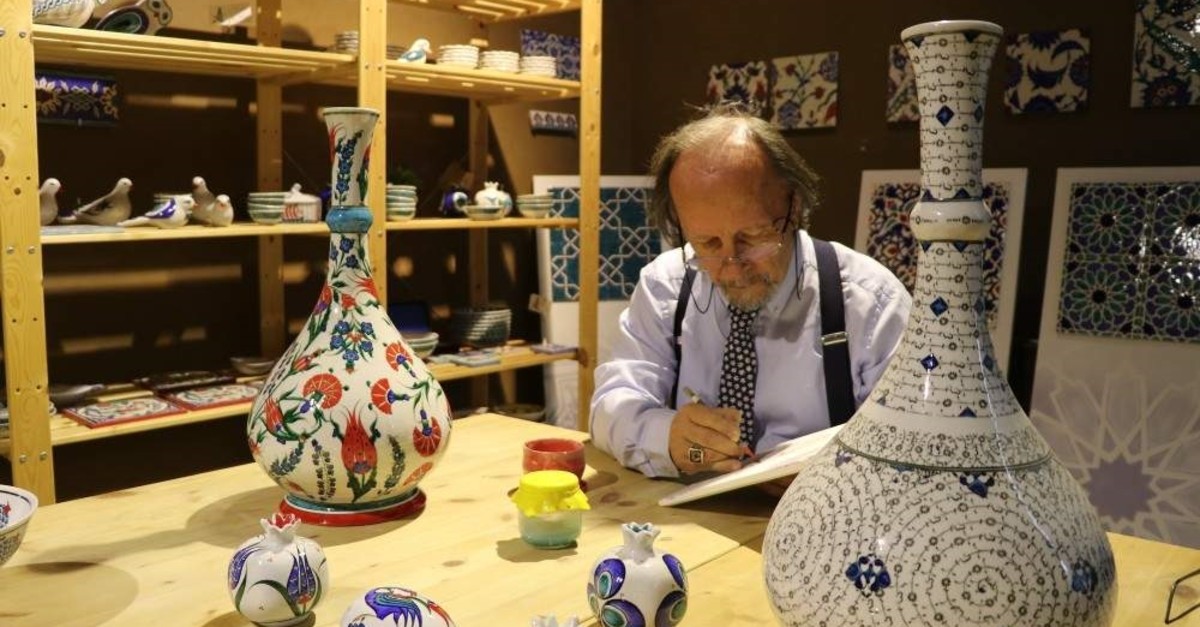 Mehmet Gürsoy, who was designated a Living Human Treasure by UNESCO in 2009, opened 72 exhibitions in 50 countries to introduce Kütahya's famous tiles to the world

Turkish tile art, which continues to imbue our homes with the cultural heritage gifted to us by Anatolian civilization, is a millennia-old art form with historic roots in the lands of Kütahya and Iznik. Tile is a ceramic product used in the interior and exterior decorations of architectural structures, mosques, mansions, palaces, fountains, shrines and others and is an art form with strong Turkish roots.

Since ancient times, the Turks have enjoyed decorating their buildings with ornate tiling, especially during the reign of the Kara-Khanids (840–1212) who founded the first Muslim Turkish state to accept Islam and began to decorate their places of worship with tiles. These decorations show that Turkish tiling has a history spanning over a thousand years, becoming a tradition continued by the Great Seljuks and Anatolian Seljuk Empire, right through to the Ottoman period. Later, Kufic script writings and Rumi motifs were added to the mosaic technique as it evolved over time.

Mehmet Gürsoy is one of today's leading tile masters preserving the art form today. Officially designated a Living Human Treasure by UNESCO in 2009, Gürsoy has done much to promote tile art with 72 exhibitions opened across 50 countries. The 44-year-old tile master describes the art of tile making as "music of the eye," likening it to "flowers that bloom in a fire" and applies 16th-century patterns and painting techniques to tile from his workshop on Germiyan Street, one of Kütahya's most historical areas.

Gürsoy, a figure registered to the National Inventory of Living Human Treasures of the Ministry of Culture and Tourism Research and Education General Directorate, told Anadolu Agency (AA) that the art of tile making was an important form inherited from the Ottoman Empire, stating that the colors used in the 16th century could not be found in the years when he started tile making: "I brought all these colors to life one by one: coral red, emerald green, lapis blue and turquoise blue... Our ancestors decorated tiles with the colors of jewels."

Gürsoy claimed that progress is being made in the area with every passing year and that some of the items produced in Kütahya recently were of quality and elegance. Reflecting on being lauded Living Human Trease by UNESCO, Gürsoy added: "In 1986, under the auspices of the Presidency, a tile competition was held in the categories of vases, plates and boards. In this competition, members of the international jury awarded me the prize in all three categories. In 2009, UNESCO named me as a heritage bearer and declared me a Living Human Treasure in the field of tile art."

SECRETS TO THE ART

Gürsoy noted that the art of tile making was one of the most beautiful legacies of Turkey's ancestors. Regarding the intricacies of this art, Gürsoy said: "Tiles are a music of the eye for me. The notes of this art are tulips, carnations, roses and hyacinths. Part of the art revolves around capturing the color of precious stones under the glaze. These precious stones include coral, emerald, turquoise and lapis, as used in jewelry making. The third component of the art involves thinking of it as a game of fire, because it is a handicraft which requires you to bake the tile at 950 degrees and see how lucky you are with whatever comes out. Turkish tile art conquers all hearts."

Gürsoy emphasized that the art of tile making gives one positive energy upon touch and careful examination. Indicating that he was striving to introduce Kütahya's tile in exhibitions in many countries, Gürsoy said: "So far, I have opened 72 exhibitions in 50 countries from European countries to the U.S., China and Japan. I have had 15 exhibitions in the U.S. alone. I have given lectures on tile art in various countries. Foreigners are interested in tile art. The tiles I take to the exhibitions go like hot cakes."

Gürsoy added that nearly 50 students he had trained in tile art were now teaching about the art in public education centers and universities across the country.
RELATED TOPICS