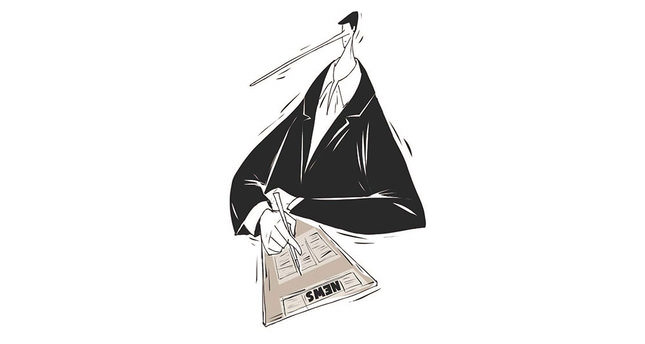 by İbrahim Altay Mar 17, 2014 12:00 am
To what extent does the international press reflect the reality in Turkey?

Unfortunately a modicum of it does; the reason being the quality of foreign journalism in Turkey.

Ömer Seyfettin is one of the founders of modern Turkish story telling.

In his "Secret Temple" story he pokes fun at a misjudgment made by a Turkophone who thinks he knows Turkish culture as well as Turks do. During his stay in an old woman's home he tells his friend with joy: "I've found your secret temple." However, what he perceived as a holy place was nothing but the bucket placed under a leaking roof to prevent it from damaging the floor. Because of the dim light and the dripping water he misjudged the place as a holy shrine. Every time I read this story it makes me smile and I am reminded of some foreign journalists writing about Turkey. Nearly a century passed since the death of Ömer Seyfettin but the Western Front remains the same; the same paralogisms go on.

Is it necessary to be Chinese to comprehend China?

Of course not; yet it is essential to be acquainted with China. Let me put it this way: Do we need to love the important figure of Catholic theology, John of Salisbury, to understand him? The answer is once again a big no. But we need to think like him and follow his train of thought. Empathy is crucial here, you see. To empathize and witness things from outside shouldn't be the extermination of things, for a lack of empathy stems from a lack of knowledge and manners. It shelters prejudice. We come across this in some foreign journalists who write about Turkey.

Let's sequence some reasons of this.

Language: Most of the journalists reporting or commenting on Turkey don't speak Turkish. Their views rely on English resources alone and this is insufficient. Can you imagine Daily Sabah's Washington correspondent not knowing English? Or the Berlin correspondent not knowing German? Or the Paris correspondent not speaking French? Likewise, it is essential for Turkey reporters from international media organizations to know Turkish. What's more, it is not enough to know only grammar and vocabulary, it's crucial to master the etymology. It is crucial to also master the evolution of language throughout time and the pejorative meaning of some words that one gains in casual conversation.

Culture: Blinking does not have the same meaning around the world. The victory sign is not the same everywhere. A hand sign meaning "perfect" in Asia may mean "you are gay" in Turkish. As told in the novel "Into the Wild," to wave your hand to a passing helicopter may be understood as everything is ok, and that may cost you your life. People, societies and cultures may differ. To get to know a society's culture, it is necessary to be acquainted with its history, religion, law, literature, sociology, psychology and economy. Whilst even native journalists of that country don't have a common viewpoint on these issues, it is not so easy to comprehend all these things by parachuting into the country. For this reason, it is natural that their analysis will be exaggerated and incorrect.

Polarization: Unfortunately Turkey is an extremely polarized country. This polarization affects not only ordinary citizens but journalists, academics, NGO employees and businessmen too. Journalists writing about Turkey source their news mostly from the elites, who are part of the polarization.

Hanging out with those elites, who occupy the top levels of social strata and only live in neighborhoods like Bebek, Nişantaşı , Cihangir and Taksim, may influence foreign journalists' work.

Moreover, some foreign journalists may find themselves supporting one side of the polarized society. They start to miss the other perspectives and cannot distinguish between the big picture and the small pictures.

They can't hear the voice of the huge majority that they can't access. Furthermore, they present the limited ideas surrounding them as the greater public opinion. An indicator of this is their definition of protesters as only pro-government while they define other protesters just as people. To give another example, they describe a protest of 10,000 people as a public revolution, while eventually always being astonished at the results of the elections.

Enlightening Mentality: An intellectual from the generation of 1968 once said: "We're the spurious children of Hitlerism and Stalinism."

Because enlightening rationalism had transformed the earth to a pool of blood and tears, progressivism had turned into human slaughter at one point.

Despite this, it is still possible to see the influence of this enlightening view. The indicator of that is how international journalists consider events in a rational-irrational binary. It's crucial to remember that, yes, there are underdeveloped or developing countries but there is no underdeveloped person.

It's not right to consider the people of underdeveloped countries as bats in the dark. They're not less intelligent, illiterate or insensitive. While considering these countries, it's better to leave aside the dualism of rational-irrational and use the "arational category," which Francis Fukuyama explains in his book "Trust."

After the collapse of the Iron Curtain, the perception of threat to the West changed.

Red was replaced by green.

Since then, a discriminating language has developed toward Islam and Muslim-majority countries. Every bearded man and hijabi woman began to be labeled jihadists while religion, religious and terrorism became synonymous. The upsetting point is that such a problematic perception has even leaked into the language of prestigious media organizations without anyone noticing. As a consequence, the issue of lifestyle and human rights has turned into an accusation more than a discussion.

Orientalism: We live in a globalized world. The consent of exploring the mysteries of the East has become a thing of the past. However, the influence of Orientalism on journalists has not yet fully passed. It is beneficial to have a look at Edward Said's writing. Briefly, "1001 Nights" was a narrative and fairytale journalism should no longer be used to understand and narrate Turkey.

National Interests: A portion of foreign journalists writing on Turkey has the tendency to see themselves as the representatives of their native country's international profits. This therefore makes them move away from perceiving events in the correct light. In some cases it even leads to a conscious or unconscious duplicity and distortion of reality.

We wrote this piece to hold a magnifying glass up to the problem and generate a discussion on the subject. When the occasions arise, we will try to supply the discussion with examples of such faulty approaches.