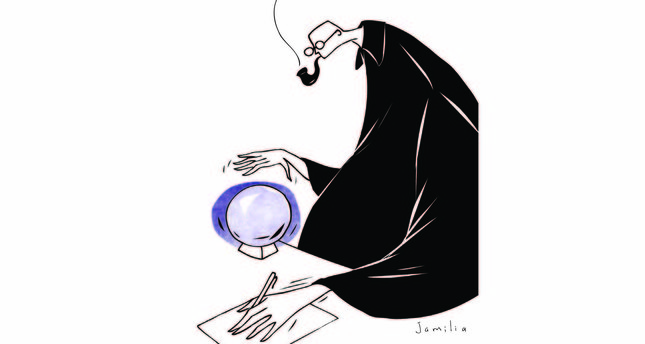 No matter which category it falls into, all published content represents the newspaper in which it appears. Journalists shouldn't play the role of oracle and base their articles on poor guesses and premonitions

"Why is there is no horoscope page in Daily Sabah?" This was the question posed by one reader I met. We discussed the matter and I'd like to do the same here.

Some of you may know that for almost one year I worked as the ombudsman of the Turkish Sabah newspaper. Among the thousands of letters sent by readers, some puzzled me greatly. One of them read as follows: "For some time I followed a lady writing in your newspaper who I think is an expert in astrology. Last week I read my horoscope comment and it said that I should take action if a new and sudden job opportunity arises. Such an opportunity appeared and I left my job of five years. I came to realize that the reason the boss of the new human relations company hired me had nothing to do with my work skills. I am a married woman and together with my spouse we are trying to build a new life. Right now I'm torn between upcoming debts and the expectations of my new boss. It saddens me when I compare my expectations to the current situation. My trust in your newspaper has been shaken immensely and I am in a predicament."

You may smirk while reading Yeliz Olcayto's letter and think to yourself how can anyone in their right mind build their life according to an astrology page?

But let's face it, the idea of normal human behavior is nothing but a myth and no one has the right to judge another person's behavior. What constitutes normal depends on the time, place, society and individual.

But what I am trying to emphasize here is a bit different. Let's say our reader's complaint is about the economy, national, international, sports or politics page rather than astrology. For instance, a news piece about a sensational football player's transfer based on nothing but a guess, or a space to be zoned for housing, or a raise in retirement pensions, or calendars claiming appointments of teachers and nurses, or predictions about interest or exchange rates, or details about a democratization package which is yet to be announced.

News about future predictions, whether or not they turn out to be real, has serious economic, psychological and social consequences.
It may cause expectations, disappointment and manipulation.

Journalists must, therefore, stop playing the role of oracle and refrain from guessing. They shouldn't act with weak predictions when writing their news.

In this case, our reader has a right to say: "Your astrology page is not representing the truth and therefore, your whole newspaper is not trustworthy to me. From now on, I will read your news in the economy, politics, regional, sports and op-ed pages with a grain of salt."

The situation then takes on an ontological dimension; therefore, I discussed the matter with my counterparts who are members of the Organization of News Ombudsmen and received different opinions.

Anton Sahlender from Germany's Main-Post said his newspaper contains a weekly astrology corner and this was only regarded as "fun and a source of motivation." I understand his point.

After all, when we look at the issue from the advertisement media perspective, fun content is a reality we can accept.

Apart from this perspective, many ombudsman colleagues said their newspapers don't have an astrology column because the scientific quality of such information is controversial at best. I stand closer to this side of the argument. The reason is quite simple:

Everything in a newspaper is content and represents the paper. It also affects the newspaper's reputation and credibility. Even if a single reader is negatively affected by an astrology column, the predictions shouldn't appear in the newspaper. And so I stand with Daily Sabah's decision not to have an astrology column. If such a time comes when the editors decide to include an astrology section, they must include a disclaimer that reads: "This page is merely for entertainment purposes. Do not base your life decisions on its content."