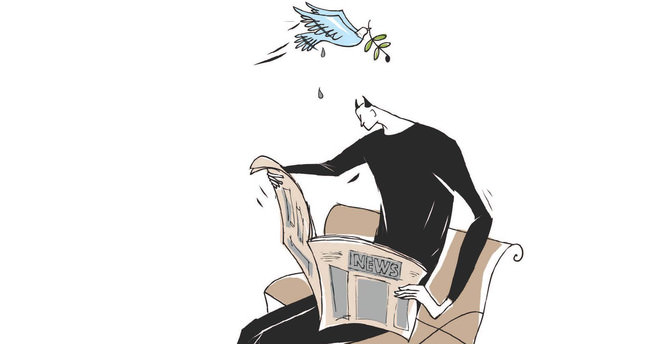 When it comes to journalism, I think the term "peace" should be understood more broadly. For example, a lack of violence is not the same as peace. That being said, disagreements don't cancel out peace. Also, the direct correlation between peace and happiness has not yet been scientifically proven

ISTANBUL — What is the definition of peace? According to the Oxford English Dictionary, peace is "a state or period in which there is no war or a war has ended." The Cambridge Dictionary, however, portrays a different definition: "Freedom from war and violence, especially when people live and work together happily without disagreements." When it comes to journalism, I think the term "peace" should be understood more broadly. For example, a lack of violence is not the same as peace. That being said, disagreements don't cancel out peace. Also, the direct correlation between peace and happiness has not yet been scientifically proven.

Turkey went through a period of arguments and tense propaganda during the recent local elections. The ruling AK Party managed to triumph.

The elections atmosphere is now starting to fade and Turkey can return to its real agenda. One of its main focuses is the reconciliation process with the Kurdish population.

To ensure this process is followed through fully, the press has important objectives. Let's summarize them in a couple of sentences.

Journalists should defend universal values of humanity, such as peace, democracy and human rights. Newspapers should respect diversity of opinions. Without discriminating against people based on race, ethnicity, gender, language, nationality, religion, class, philosophical journalists should review them with the utmost neutrality. They shouldn't provoke hostility and adversity between society and individuals.

Journalists are supposed to be in favor of peace, not conflict. This doesn't mean the loss of objectivity. It also it doesn't mean that they should distort or hide facts to support peace.

They should be careful about the wording of their news or comments.

A sizeable amount of literature has already been written on the trend of peace journalism after the field was founded by Jake Lynch and Annabel McGoldrick. It has been discussed at many universities around the globe. While it has little ground in Turkey, thanks to studies by Dr. Süleyman İrvan and his assistants, peace journalism found its way into our academic world.

Let's summarize the criteria that this trend is based upon with the help of said studies: Try to avoid portraying the conflict as one side against another. If you don't, the logical result is that one side will win and the other will lose. But peace journalism focuses on the benefit of individuals and society and has a win-win mentality. A pro-peace journalist should study the sides in small groups with different goals. Peace journalism is against alienation. It avoids remarks like "us" and "them."

Rather than picking a side, peace journalists stand with truth, fact and justice. Otherwise, one side becomes a threat and enemy and this will lead to the justification of violence. It is wrong to study a violent event or ongoing oppression while only thinking of the day's conditions. Journalists should analyze the reasons that led to the current situation, as well as the psychological traumas on individuals and society in days to come. While mentioning the contrasts, neutrality is the key. Also, they should mention the common ground as much as the contrasts. Positive events should also be mentioned as much as the negative ones and this should be relayed to society. Don't focus on the pain and grief of one side. This causes one side to be portrayed as the perpetrator and the other side as the victim. It also causes a line of thought where the perpetrator should be punished. Therefore, project grief, fear and pain equally. Victimization words such as defenseless, horrible, miserable, pitiful and tragedy shouldn't be used. This kind of language weakens people and limits the options for change and mandates a certain type of action from people. Instead of merely focusing on their feelings, ask for their thoughts and listen to their solutions if they have any. Do not fall into the trap of demonization.

Adjectives like extremist, fanatic and fundamentalist shouldn't be used because these are the type of words we use for "others." No one uses them to define themselves.

So when a journalist uses these words he or she picks a side. These words classify those people as unreasonable and non-negotiable. So either use words that they define themselves with or be more careful with your definitions. Don't mix up peace with military victories or truce. Instead, focus on unsolved problems that will cause violence in the future.

These guidelines should apply to everybody. Turkey, the region and the world need peace journalism.

But this type of journalism shouldn't normalize violence or justify it. The important part is to maintain the crime-punishment scales of people while solving problems within the confinements of democracy. As the Ombudsman, I expect journalism that will balance these two terms.