Imprisoned journalists and freedom of the press 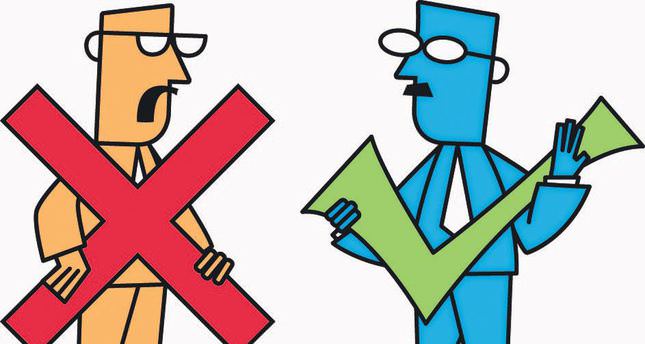 by İbrahim Altay May 05, 2014 12:00 am
As far as I can observe from the social media, reporters at Daily Sabah enjoy arguing with their colleagues from other newspapers both local and foreign. Last week, Joel Simon, the director of the Committee to Protect Journalists (CPJ), was at the center of such an argument. The reason for this little debate was a report released by the CPJ about jailed journalists in Turkey.

Daily Sabah's Ankara representative Ali Ünal tweeted, "CPJ reports on jailed journalists fail to reflect the truth," mentioning Simon. A news article titled "CPJ assessments on jailed journalists inaccurate" by Nurbanu Kızıl was also linked to the tweet. Simon, of course, didn't fail to rise to the challenge. He said: "The Sabah article is not accurate. Here is our statement," referring to the article on the CPJ's official website titled "CPJ calls on Turkey to address press freedom challenges."

First of all, I would like to note a point here. Sabah and Daily Sabah are two different newspapers. Sabah is a daily Turkish newspaper. But unlike many rash and inaccurate suggestions, Daily Sabah is not Sabah's English version. Daily Sabah has its own editorial board and journalists.

They exist in the same media group: This is the only thing that associates them.

Like many other colleagues Mr. Simon is also confusing this vital distinction.

Before answering the question about who is right or wrong, I would like to take a closer look at the source of this discussion. Freedom House, an institution based in the U.S., recently released a report about freedom of the press and put Turkey in the category of countries that do not have a free press. This report was praised and given significant importance by anti-government media organizations - almost 60 percent of Turkish media. According to the records, Turkey has been in the category of countries that have had a partially free press for the past 14 years, and this was seen as quite a serious setback. In Freedom House's report, there was a reference to the CPJ's jailed journalists in Turkey statement made on Dec. 1, 2013. The CPJ claimed that there were 40 imprisoned journalists in Turkey.

Daily Sabah argued that this number does not reflect the truth. While the CPJ dwindled this number down to 21 in its April 30, 2014 report, Daily Sabah claimed this number too was false. According to Daily Sabah, six of the journalists named on the CPJ list have been released, and 15 of them are in jail as of now. In this case, the CPJ should update its list.

Daily Sabah also portrays these individuals on the list as "so-called" journalists. This stems from the information that these people are in jail because of crimes unrelated to their journalist identities.

Regarding this matter, the CPJ and Daily Sabah have fundamentally different perspectives. CPJ Europe and Central Asia Program Coordinator Nina Ognianova said: "The government's strategy is to attack its critics rather than address legitimate concerns. These concerns stem from the fact that Turkish authorities continue to unjustly jail journalists for carrying out their work and to systematically suppress critical reporting."

In response to Ognianova here, I quote Kızıl of Daily Sabah: "The CPJ has consistently claimed these journalists were imprisoned for expressing views opposing the government. However, it has ignored the fact that almost all of those imprisoned were detained on a number of criminal charges, most importantly for being part of a terrorist organization. The crimes included the possession or transfer of hazardous materials, forgery of official documents, attempts to destroy the constitutional order and the possession and carrying or purchasing of unregistered firearms and bullets."

Government and the judiciary

As the ombudsman of Daily Sabah, I would like to emphasize several key points in order to render this discussion more fruitful.

❱❱ Talking about Turkey, unfortunately the lines are quite blurred between journalism and ideological activism.
In some cases, this ideological partisanship coexists with a revolutionary violence mentality that justifies bombing or taking up arms in order to reach a result.

A couple of examples to clarify what I mean:

In the CPJ's reports, there are some individuals who are journalists and in prison, but they are in there for different crimes, as follows:

Ç. K.: Threatening and kidnapping a contractor with a weapon, bringing the so-called contractor to a cell house and abducting him.

F.Ç.: Possession of Molotov cocktails and firearms and using them against police forces.

In light of these criminal activities, can we still claim them to be jailed because they are journalists?

I think not. However, there is a distinction to be made here. Just because someone is claimed to be part of a terrorist organization doesn't mean we can label that individual as a terrorist without due process.

If they are not involved in an armed action and only expressed their ideology (no matter how marginal it is) and acted like journalists, we have to say, the CPJ's classification is more accurate. In that respect, we have to examine each of the detainees' cases individually in order to decide. After all, it would not be wrong to guess the number of jailed journalists would diminish even further.

❱❱ There is confusion about who is classified as a journalist in Turkey. The main reason is the state issued yellow press cards. This card and insurance system entails some benefits to journalists and puts them in a more privileged position.

Like many other democratic countries, this must stop. Press cards should be issued by newspapers or unions not by the state. With this step, freelance journalism would be better supported.

❱❱ As the media found itself a new ground on the Internet, it started to change its form, and this led to the need for personnel in the printed media to diminish. Some magazines are closed down because of monetary reasons.

Newspapers started to downsize, acting on a survival instinct that led the sector to shrink. This started with journalists who are not on the same page with newspaper owners.

Since this is the current climate, it was only then that these layoffs found a political background, and the attention of institutions like Freedom House and the CPJ focused here. Not to mention that several anti-government newspaper executives with big paychecks who are out of job also fired many reporters and editors with low salaries back in the day for both economic and political reasons.
The same people also resisted the unionization of the media, which led to the current situation. Of course, it is unthinkable to find joy in these layoffs, but we have to remember one of the reasons as the downsizing of the sector and seek a solution for it.

❱❱ Everybody should be aware that the government and judiciary are two different bodies of state in Turkey. We can't claim they are completely independent from one another, but as the Dec. 17 events showed, there can be religious and ideological groups holed up in the judiciary that have completely different agenda from the government. The judiciary is the one that initiates investigations and delivers a ruling on these journalists in the report. If the executives of the CPJ decide to look at how the number from Dec. 1, 2013, diminished in a mere couple of months, they would be able to see the facts. My advice to them is to disregard journalists who criticize the government for using its response and correction rights by knocking on the judiciary's doors and claim this action as censorship.

To wrap up, I would like to emphasize this: A free media is a must for democracy. As for all countries we can't say there is a completely free media in Turkey. But to downgrade the lack of freedom in the media with political and economic reasons and analyze the situation without historical, sociological and cultural aspects would classify it as obsessive. As we look at Turkey's lack of freedom in the press, we have to be able to differentiate between criticism and insult. It is quite unjust to categorize the press in Turkey with third world countries only by using immature criteria that can be argued about. There are newspapers and writers here that accuse the prime minister and the government of being a dictator, yet they are able to continue their publishing
activities. I hope I made my point.