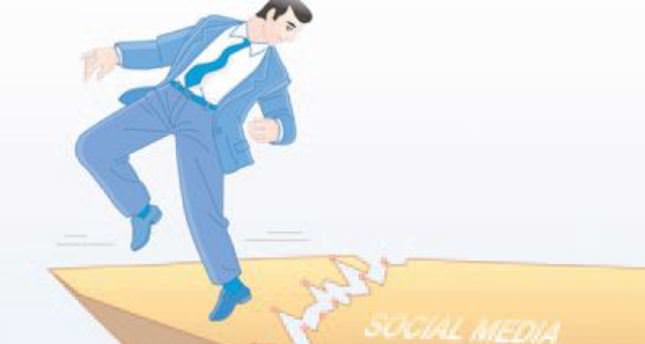 by İsmail Selim Eşsiz May 19, 2014 12:00 am
New communication can provide almost anyone with their 15 minutes of fame but sometimes social media can be a harsh mistress. Journalists that are active on social media, or more specifically Twitter, generally house a much larger audience than common users, making discretion a priority. Many authorities set guidelines for their journalists on their usage of social media and Daily Sabah is no different as we begin formulating our policies.

The first sign of this was mentioned in İbrahim Altay's March 10 dated article "Social Media Use by Journalists" so I will begin by quoting the initial guidelines from there: "Daily Sabah journalists are not obligated to respond to insults, only to factual criticism." "Daily Sabah journalists should not personalize arguments via Twitter. They must refrain from generalizing and using words and sentences that can be interpreted as insults." "Daily Sabah personnel must be calm and impartial regardless of the situation."

Of course these guidelines are far from complete and an incident last week showed a reminder that an addition should be made.
The said incident started with a tweet blaming external parties for the Soma tragedy from Betül Kayahan, who from time to time wrote articles as a freelance contributor to Daily Sabah. The tweet was criticized heavily and later on Kayahan suspended her account.
Especially in the times of great sorrow, a journalist should refrain from commenting with unproven allegations particularly on platforms that have no editorial control, even if it is in the heat of the moment and even if the only reason for tweeting is showing respect for the families that experienced the tragedy.

The incident showed that without the checks and balances of a newspaper, the only thing that provides a safety net is the conscience and wisdom of the journalist when it comes to social media. After all there is a saying that once you post something online it's on the Internet forever. Once you post it you can't take it back no matter how much you want to.

Another thing to note here is that some of the criticism claimed that Kayahan's opinions were the opinions of Daily Sabah itself. As indicated before, Kayahan is a freelancer and not part of the editorial staff of Daily Sabah. Also as İbrahim Altay stated in this week's article, the opinion of Daily Sabah can only be found on its editorial pieces and since there is an editorial about the Soma tragedy, our readers can find out where we stand on the matter if they care to. In this matter I further quote Altay: "I would also like to press on this, social media accounts maintained by Daily Sabah-related journalists reflect upon the reputation and credibility of the papers' newsroom.

As the example clearly showed when posting something on the web, you usually don't get a second chance before it is seen by thousands. Even a typo can make people misinterpret you and in a matter of minutes you could be facing criticism, not to mention giving false information to the public. When posting something online you are your own reporter, editor and copy editor. So you should examine your posts wearing each hat yourself and finally put it to a test against your wisdom and conscience asking whether you should post it or not. Hopefully in this process our guidelines will also be there to help you."
Last Update: May 19, 2014 1:41 am
RELATED TOPICS