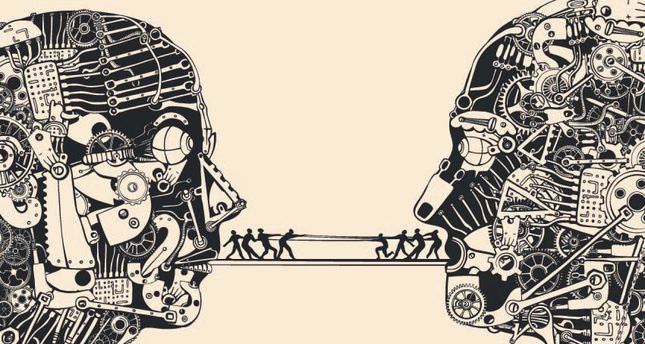 Let me answer that shortly: In the case of photofits, our material is theoretical and fictional. no matter how much work was poured in or how much it resembles the real thing, all it can do is provide a model. It can be classified as to whether or not it makes sense. All we can comment on is its resemblance to the real thing. It certainly can't be judged to be right or wrong.

On the other hand, a photograph is neither a model nor a hypothesis. Each photograph depicts a certain thing. If you know the person in the photograph, you can easily distinguish whether the photo is true or false. Therefore, there is something we shouldn't forget: What you behold is a photograph, not the real person. To elaborate: A photograph is a frame in which a person is positioned for a single moment and from a single angle. Let us also remember Michael Foucault, writer of "This is not a Pipe.

"To clarify further, we can say that a photograph is a discovery, and a photo fit is speculation. The duty of a journalist is to discover an event and relay as it is, rather than letting his or her imagination and memory run its course.

Language and logic hand in hand

My goal with this rather long introduction is this: there is an inseparable relationship between journalism and logic.
Therefore, if there is a lack of a notion in terms of logic, then journalism also becomes foul.

Philosopher Ludwig Wittgenstein puts the relationship between language and logic under the spotlight in his studies.
To agree with him I say this: The logic of a language and a culture can be found in the grammar of the said language. We
can even say in the case of logic there can be several grammars hidden inside a language. Also, these are not just tenses, prefixes or suffixes either.

Turkish academician Dr. Şakir Kocabaş, who died in 2006, was one of the county's pioneers in the field of artificial intelligence. He wrote over 20 articles on formation organization, modeling of inventions and simulation. He also penned three books. One of them is about logic and is titled "Grammatical distinctions of statements."

In this book, Kocabaş classifies statements in these categories: imaginary statements, metaphorical or similitude statements, situation statements, theoretic statements and statements of basic beliefs. In Kocabaş's classifications, there
are other categories, but we will not mention them – after all these are sufficient to make our point.

With the aid of Kocabaş's classifications, let us quickly define these statement types:

Fairy tales, fictions and stories are in the category of imaginary statements. Whether they are true or false is not important and proving them as either is a futile effort. We don't question whether Keloğlan was bald or how tall was the genie from Aladdin's lamp. Even if we do question them, the only answer we are going to get is an imaginary one.

In cases of theoretical, hypothetical and empirical models, whether a theory is true or not is irrelevant.

As the name suggests, these are just models that are used or can be used in certain types of situations. If variables happen to be different, they can be incoherent. In these models truth and certainty can only be sensible in its own closed system.
The decimal system can serve as an example here. This system is a tool for math, and if we were to choose a base three number system instead of base 10, our math perception would be completely different. Just like what computers did with people's logic perception.

Situation statements are descriptions of events as they are witnessed. They shouldn't include any explanation in
terms of logic. They are solely constructed by what is seen. As soon as we start to comment on what we have seen, they stop being a situation statement. They become a theoretic or imaginative statement. Journalists should refrain from approaching situations in this manner.

When making the classification of statements of basic beliefs, we do not constrain ourselves with just religious beliefs and include all statements that can't be proven. Science, politics, economy and sports are filled with such statements. In most cases, people who make such statements don't even realize that what they claim falls under the belief statement category. Especially journalists.

Lastly, let's mention historical statements. This type tells of past events with the setting as a reference point.
An event that happened in the past can be relayed from the point of view of someone who told them first. In this case, no matter how canonical events seems, they shouldn't be related without first indicating the reference point.
Otherwise, we would be crossing the borders of both journalism and logic.

Unfortunately, both in Turkey and in the world, logic is not appreciated as much as it should be. This also transforms journalism into a manipulative state. A large number of journalists are not aware of the classifications of statements or logic categories that we mentioned here. This leads to confusion, and in turn, it leads to misleading readers.

Sometimes an imaginary statement transforms a depiction of a situation. Journalists start to discuss an event as though they witnessed it first-hand even though they did not. Editors who seek to strengthen a news article can also cause this.

In some instances, empirical statements in predictions become a supporting factor in the same argument.
Sentences such as "This happened, and its logical outcome should be this," usually fail to deliver.

Another problem occurs when the causality connection is severed. Even though there are no logical ties between
cause and effect, it mistakenly starts to be perceived as a sensible whole. A short joke can serve as an example here:
a scientist experimented on a fly by tearing off both of its wings and telling it to jump. Since the fly had no wings, it failed to comply. After the experiment, the scientist writes his report, saying "When the fly had two or one of its wings intact, it managed to jump. But when both of its wings were severed, it failed to jump.

This means when both of their wings are gone, flies lose their ability to hear."

We can elaborate the list or give more examples on the subject. From time to time, we witness illusions where a basic belief statement is disguised as a theoretical or even scientific statement. In cases of economic and financial news, in particular, this is quite common I am afraid. The same thing can be said when historical statements are based on a single reference.

For this reason, many journalists base their "truths" on different statement types that can hardly be classified as hypothesis. Predictions, guesses and truths become all tangled up.

WHERE IS THE WISDOM?

T.S. Eliot says in his opening stanza of "Choruses from the rock:"

I would like you to turn your gaze on how Elliot gives different meanings to the words information, knowledge and
wisdom. Let us add the word "data" to them. These four words stand for different things. However, when we look at a
text written by journalists we may confuse them as all meaning the same thing.

A similar issue can be seen with words such as postulate, axiom, paradigm and parameter.

To conclude, we can say: all journalists should be familiar with the science of logic and careful about the statement
types they use. Otherwise, all those contents and manners construct a chaotic situation that renders journalism useless.