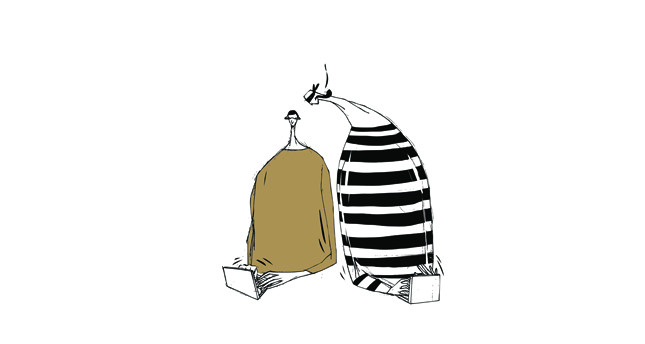 by İbrahim Altay Jun 09, 2014 12:00 am
Can words and ideas be stolen? The answer is yes. Original ideas and the way of expressing them are known as intellectual property, as long as they are written, told or recorded in proper ways.

Roman poet Martial, who lived in the first century, is believed to be the first person to use the Latin word plagiarius in the context of literary theft. Plagiarius originally meant kidnapper, and Martial complained about another poet for "plagiarizing his verses." Today, it has become a universal issue for academics, journalists and all kinds of artists.

According to the Merriam-Webster Online Dictionary, to plagiarize means "to steal and pass off [the ideas or words of another] as one's own, to use [another's production] without crediting the source, to commit literary theft, to present as new and original an idea or product derived from an existing source."

Judging by this definition plagiarism involves stealing someone else's work and lying about it. It is absolutely an act of fraud. Stanford University defines plagiarism as the "use, without giving reasonable and appropriate credit to or acknowledging the author or source, of another person's original work, whether such work is made up of code, formulas, ideas, language, research, strategies, writing or other form."

When we look closely to examine these definitions about plagiarism we can observe that common knowledge and well-known facts fall outside the terms' jurisdiction. As it can be seen in the Princeton example: "deliberate use of someone else's language, ideas, or other original [not common-knowledge] material without acknowledging its source."

So now the question is this: How can we decide whether an expression is common knowledge or a well-known fact? The answer is quite simple. If the information is readily available from numerous sources, we do not have to cite or mention any of them.

To sum up with the help of plagiarism.org, all of the following are considered plagiarism:

- "Turning in someone else's work as your own

- Copying words or ideas from someone else without giving credit

- Giving incorrect information about the source of a quotation"

In these cases literary theft can be avoided by citing sources accurately. In order to prevent plagiarism, journalist should simply acknowledge where certain material has been borrowed from and make a clear reference to the source.

But do not forget that in some cases plagiarism is not a "to be or not to be issue." There are some more complicated situations like:

- "Changing words but copying the sentence structure of a source without giving credit.

- Copying so many words or ideas from a source that it makes up the majority of your work, whether you give credit or not."

To elaborate on the last situation let's set a standard here. If more than 40 percent of an article in a newspaper consists of opinions other than the writer of the article that text falls under the faulty category. There are many kinds and types of plagiarism. Self-plagiarism also called "recycling fraud" or "multiple publication" is one of them. It is clear that newspapers pay their writers or columnists for their original opinions that are disclosed to the public for the first time. Any other type of article does not fulfill this role.

There is no doubt that plagiarism is disrespectful to say the least. Not just toward one person but to several people and foundations.

When people commit plagiarism, they mainly disrespect the one who first produced said content or research. As the Turkish proverb "Marifet iltifata tabidir" roughly translates: "Give credit where it's due." Secondly, while doing so they also disrespect readers by conning them. The reader thinks that the text belongs to the writer who committed plagiarism and believes that it is the original language, approach and thoughts of the writer. However, the reader has a right to know if the case is otherwise. In order to give them this right, there are several tools available to the writer, such as paraphrasing and quotation marks. Also, the writer should be explicit about sources.

Finally, plagiarism disrupts the relationship between the newspaper and writer, which is largely based on mutual trust. In some cases, plagiarism can be seen and sometimes cannot. But if the former happens, the writer becomes a usual suspect in an ethical viewpoint, and therefore, all of the writer's articles become suspect. If the newspaper does not take action accordingly in the long term, it can be seen as an accomplice. Therefore, newspapers should be very careful about this as well.

Even though plagiarism is often perceived as a moral offense rather than a crime, there can be some sanctions. Especially in cases of journalists, any plagiarism hurts the credibility of newspapers hugely. When the subject is newspapers and media foundations, this issue calls for precautions. CNN anchorman Fareed Zakeria is a good example of this, as his program was suspended for a time due to accusations of plagiarism but was later cleared of those accusations and returned to work.

As a young newspaper, preventing plagiarism is quite an important issue for the Daily Sabah. As the ombudsman of the newspaper, I would like to make several suggestions to the editorial board:

- Because of the increase in terms of digital publishing and the "copy paste" method, plagiarism became easy to commit but as with every sword this cuts both ways. This also made it easy to determine whether plagiarism is committed or not. Therefore, editors should research every text online, and if they suspect plagiarism, they should refrain from publishing it.

- In the copy edit process, quotes, quotation marks and summaries should be double checked whether they are used accordingly or not. If it is necessary, copy editors should work with writers on this matter.

- If there is an accusation of plagiarism about a published article, these accusations should be taken into consideration by the editorial board as swiftly as possible and concluding the matter should be a priority. To determine if there is indeed plagiarism or not, methods and
rules set by respectable universities should be used.

Doing so will make Daily Sabah a more respectable newspaper.