Forcing the shoe in today's media 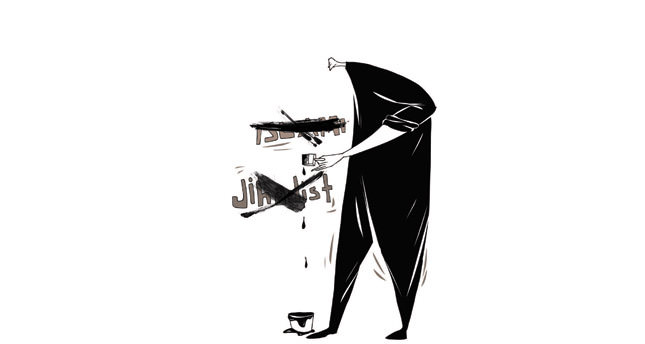 When it comes to the "if the shoe fits" mentality in the mainstream media, these generalizations usually serve to discriminatory ends and this seems to be the case with the use of the terms "Islamic terror" and "jihadist"

Last year in October I attended a symposium on the war on terror. The two main speakers were Lucia Ling Ket On from the Netherlands and Sergei Gerasenkov from Russia. Both of them were working in the counter-terrorism units of their respective countries. During their speeches they used terms such as "Islamic terror" and "jihadist." At one point of the speech Colonel Osman Gürcan from Turkey challenged them, saying these terms are being used in an incorrect context and stated that the joint usage of Islam and terror is disturbing to Muslims. Both speakers agreed with the Gürcan's points. Garasenkov said that he was not referring to Muslims who took no part in violent incidents. Lucia Ling Ket On also admitted their error by saying "They used these terms because of the failure of finding more correct ones."

Now one year has passed but despite all these disagreements, the usage of terms such as Islamic terror and jihadists has become more widespread. Of course events in Middle East - especially in Syria and Iraq - played a key role in this.

So what are the stories of these terms? When did they first appear? What is their origin? Let us look for the answers.

Many think that these terms became more widely used after 9/11. Also, the first usages were attributed to names like Oliver Roy and Daniel Pipes. Both claimed that they are not lumping traditional Islam and militant Islam together and that they used these terms for the marginal and violent Islamic groups they defined as militant Muslims.

Both writers fell to this contradiction:

Around the world while terrorists are defined as what they are: terrorists; they are not categorized as Christian, Jewish, Buddhist or Shintoist terrorists. But when the terrorist is a Muslim, they suddenly disregard this principle.

Also why are they insisting on using "jihadism" while they know that these new movements are using it as a political argument rather than a religious one? The reason is simple: hypocrisy. They formed a connection in their minds between Islam and terror. In other words it is because they are Islamophobic and neo-Orientalist.

Hypocrisy may be a tad over the top but the Afghanistan example is very fruitful in showing us these definitions are political rather than scientific. Western media and intellectuals defined the people fighting against Russia as "Mujahedeen." Mujahedeen held a positive meaning then. If people fighting (doing jihad) were defined as mujahedeen back then, why is there a need for defining people with the same mentality differently right now? Did jihad hold a positive meaning while it is categorized as a bad thing in the current climate? Why is that? It is a question worth pondering.

To delve into this problem we have to journey further back and look at the articles of Bernard Lewis and Samuel Huntington. The main points of the Islamophobic arguments such as "Muslim rage" and "clash of civilizations" were first mentioned in the 1990 article "The Roots of Muslim Rage" by Bernard Lewis. That was followed by Samuel Huntington's "Clash of Civilizations."

The resemblance between Huffington's article and the "Foreign Affairs" article signed by Mr. X that is considered as initiating U.S.'s policy on the Cold War.

One of the ex-directors of the Central Intelligence Agency James Wooley said in 1994 that Islam is the biggest threat to the West since communism. No doubt events such as 9/11 eased the process of linking terror with Islam but this Islamophobic approach has much deeper origins than that. The Palestine-Israel conflict before 2000, oil crisis in 1973 and Iranian Revolution in 1979 played key roles in this process.

Mass Media Specialist Professor Jack Shahin studies this issue in his acclaimed work "Reel Bad Arabs," in which Shain reviewed over 300 movies and presented the "bad Muslim" stereotype on the minds of regular Westerners from different aspects. This can also be considered as a negative effect of historical competition between Christian and Muslim worlds on Western minds. Unfortunately this caused unethical approaches and viewpoints to form, prosper and spread. It even can be found in mainstream media that prides itself on being objective.

Let us summarize two main mistakes here. First is identifying any religion with terrorism. This is not ethical at all. The term "Islamic terror" means that the cause of terror is the Islamic faith. On the other hand actions of a limited number of people who said they are Muslim cannot be forced upon the rest of the population or the religion itself, even if those people claim they are doing it for the religion. After all, it simply is a self-proclaimed action and that does not bind the religion itself . Using or spreading the term "Islamic terror" is as discriminatory as identifying any other religion or ethnic group with terrorism.

The second mistake stems from either a lack of knowledge or ill intent. In other words, the meaning of the term jihad in Islam is unknown or they are pretending to not know it. BBC can serve as an example here. In the website version of the BBC under the "Religions" section the term jihad is defined as: "The literal meaning of jihad is struggle or effort, and it means much more than holy war. Muslims use the word jihad to describe three different kinds of struggles: A believer's internal struggle to live out the Muslim faith as well as possible, the struggle to build a good Muslim society and holy war, the struggle to defend Islam, with force if necessary."

After that, under the title "What can justify jihad" there are several points on the third aspect of jihad: "Permissible reasons for military jihad:

Protecting the freedom of Muslims to practice their faith

Protecting Muslims against oppression, which could include overthrowing a tyrannical ruler

Punishing an enemy who breaks an oath

Also BBC listed what commonly are not considered justifiable reasons for jihad: "A war is not a Jihad if the intention is to:

Force people to convert to Islam

Conquer other nations to colonize them

BBC last updated this article in 2009. Roughly five years ago. During this time I wonder what led them to use the term jihadist so easily?

There are several criteria when defining a person or a group. One of them is looking at how that person or group defines themselves. Another one is to let their actions speak for themselves. Let us take the Islamic State of Iraq and al-Sham (ISIS) as an example. What should a journalist do when defining this group? This group defines itself as a state or an army. Is it okay for us to define them as a state or as an army? Or if we consider their actions to be terrorism what should we say? Without a doubt, the term Islamic terror should not be used in either case and they certainly should not be define as jihadists.

As we said in the article above it is not ethical to link religion and terror. Since jihad stands for a much larger concept, it is wrong to just identify it with terror actions. Journalists should avoid using this term.
RELATED TOPICS