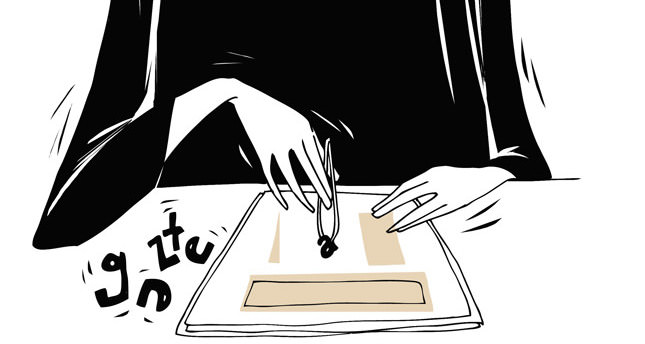 by İbrahim Altay Jul 14, 2014 12:00 am
The Daily Sabah editor-in-chief forwarded me an email he received recently. It was sent to him by Yigal Schleifer and its contents were as follows:

"I hope all is well. I wanted to bring to your attention an issue with a recent article Daily Sabah ran, about Russia trying to promote tourism to Crimea over Antalya. Click here for the article

Looking for more information about this, I came across an article from June that appeared on the website of the Canadian magazine Maclean's:
Click here for the article

After I received the forwarded email and finished reading it I examined both news articles thoroughly. The first news article was released with the title "Tourism in Crimea, not Turkey" by Adnan R. Khan. It was published in Maclean's on June 16, 2014. The subheadline of the article was "In its bid to control the Black Sea, Russia is turning up the heat on Turkey – and luring its visitors to Crimea," and the first couple of sentences are as follows:

"Russian television viewers were treated to a curious appeal recently: "Go to Crimea rather than Antalya," a state-owned TV channel advised viewers in a news bulletin last month. "Both the prices and the climate are better in Crimea."

In the latter part of the report it is investigated whether the quote was indeed true or not. Following that, the opinions of Tarık Oğuzlu were included in the piece. Oğuzlu is the director of the Center for Social, Political and Economic Research at Antalya International University.
In the second link that Schleifer sent to us regarding the July 6, 2014 Daily Sabah article titled, "Russia Promotes Crimea over Antalya," with no signatures starts as follows:

"According to Canadian daily media outlets, a Russian state-owned television channel advised viewers to go to Crimea instead of Antalya claiming that both the prices and climate are better in Crimea, which is an innocent but misleading request."

Before jumping to any conclusions I decided to refer to the editor of the related page on the matter. Here is the explanation of the editor:

"The very first words of the story are 'According to,' which means the Daily Sabah economy department did not write the story on its own but made use of another source, in this case Maclean's being the source. Moreover, the story was combined with a formal statement by the Ukrainian Tourism Information Center highlighting that Turkey is a popular tourism destination among Ukrainians. By combining those two stories Daily Sabah organized a new story. In this situation we could not add the Maclean's byline."

First things first. I would like to express my thanks to Yigal Schleifer for bringing this matter to our attention. After I spoke about it with the editor-in-chief and the economy page editor, I sent a short explanation to him. But I decided to bring this matter up here as well in order to encourage our other readers to contact us. I would also like to remind and caution our editors on the subject too.

When we carefully examine the article with the reports, it is clear as day that the Daily Sabah report took its inspiration from the Maclean's version. There is no denying that. But also the source information was quite foggy. Several opinions on the matter believe that information on the source was enough from both a technical and a legal viewpoint. I remember a New York Times article published on July 1, 2014 headlining "Turkish Premier Runs for President, an Office He Plans to Strengthen" by Tim Arango and Ceylan Yeginsu. In that article, Daily Sabah columnist İbrahım Kalın's "As President" article was quoted and source information only said that "İbrahim Kalin, a top adviser to Mr. Erdoğan, wrote in a newspaper column on Tuesday." In other words there was no mention of Daily Sabah. So I think in both cases being this ambiguous on source information is impolite. When quoting another person or taking inspiration from another news report it is important to clearly state the date and the place it was first published as well as the person who reported it. This would be a more ethical and elegant way of doing things. So to summarize it shortly, it would be more responsible and respectful for the hard work Adnan R. Khan and Maclean's had done if their names were to be stated clearly.

Our economy page editor is right on one point however. The reports are not the same. Daily Sabah summarized the Maclean's report and added other information it took from the Ukrainian Tourism Information Center. Therefore we can talk about a combination here. But we have to remember that in journalism, paraphrasing comes with a set of rules.

The Maclean's report consists of 13 paragraphs which are quite extensive. Daily Sabah however only has three paragraphs and two of them summarize the Maclean's report. If more than half of a report is based on another one, its originality comes under a scrutiny. We talked about this problem in a previous article titled "Journalists and Plagiarism." We said back then:

"Do not forget that in some cases plagiarism is not a "to be or not to be issue." There are some more complicated situations like copying so many words or ideas from a source that it makes up the majority of your work, whether you give credit or not.

To elaborate on the situation let's set a standard here. If more than 40 percent of an article in a newspaper consists of opinions other than the writer of the article that text falls under the faulty category."

When we look at it from a different angle we also face another fact. When writing the report, Adnan R. Khan interviewed Tarık Oğuzlu on the subject. If a person first reads the Daily Sabah version they might think that it is the Daily Sabah that interviewed Mr. Oğuzlu. Therefore a note saying "Oğuzlu said to Mclean's" would be appropriate.

Long story short: Because of the recent crisis in Ukraine and the approaching holiday season, this is news that is worthy to our readers. It also gives an idea about the power struggles and strategies in the region. Daily Sabah is laudable for discovering such a news report and enriching it from other sources. But it would be more prudent to give credit where it is due in a more clear manner while doing it. The personnel in the web division of the newspaper should especially be more careful about quotes, summaries and sources. The respect of our readers demands it. The best way to handle situations like this is to give the link of the source in the report itself.