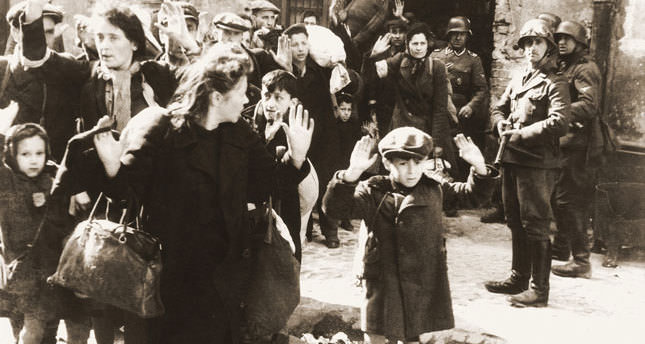 Holocaust survivors cry out to world powers to stop the Zionist genocide of our Palestinian brothers in occupied Palestine!

We Jewish Holocaust survivors implore enlightened world leaders to immediately stop the genocide of the Palestinian people. Evil Zionists bombard day and night buildings full of innocent men, women and children and burn them alive. Totally defenseless people are thrown out of their homes in the middle of the night and herded into ghettos. These illegal acts of terror remind us of the horrible events we experienced during the Holocaust. Bloodthirsty Zionists shamelessly abuse the U.N.-stipulated principle of legitimate self-defense in order to murder in cold blood hundreds of our Palestinian brethren.

It is time for world powers to right a historic wrong. The world stood silent when our families were sent to gas chambers. It is this very deafening silence that resounds again as Zionists commit their crimes in occupied Palestine. It is because of the Zionist occupation imposed on them by the force of arms that our Palestinian brethren have been dispossessed, expelled and murdered for nearly 70 years.

As if to atone for their indifference during the Holocaust, world powers authorized Zionists to establish a state. It was cruel, illogical and shortsighted to give them a state in Palestine at the expense of an innocent people that would be deprived of their ancestral homes and property. As a result, millions of refugees are still languishing in camps, and the Holy Land has been plagued by incessant violence that has destabilized the entire region. In fact, Zionist leaders were just as indifferent to the fate of Jews in Europe as the rest of the world; they even collaborated with the Nazis who, in turn, treated Zionists, who also believed that Jews had no place in Europe, with respect and understanding.

It is monstrous for world powers to allow Israel to exploit the memory of the Holocaust in order to deflect opprobrium for the Zionists' genocidal oppression of the Palestinians. Since the Zionist state is often mistakenly considered "the Jewish state," Jews around the world find themselves exposed to condemnation and even violence for what «Israel» does to the Palestinians. Thus the Zionists' cruelty fuels anti- Semitism, which has always been a useful tool to prove Zionism right and to attract more immigrants. Put an immediate end to the Zionists' genocidal crimes! Bring their perpetrators, political leaders and military personnel alike, to the International Criminal Court in The Hague.

We Holocaust survivors implore world powers to use all the means at their disposal to stop the Zionists' violence against innocent people. We, Jews who believe in God, hereby declare that the Zionists do not belong to the Jewish people or the Jewish religion, which strongly opposes murder. Zionists are not Jews at all, and their use of the name «Israel» is a forgery. They are only brazen terrorists running a state of international terrorism.

They do not represent the Jewish people at all, nor do they have any right to a single clod of earth in the Holy Land, We convey our deepest condolences to all the families of those murdered, and to the Palestinian people and its leaders; and we wish a complete recovery to all those wounded by the bloodthirsty Zionists.

We pray to God for the speedy salvation of the Palestinian people and its leaders from the arms of the Zionist wild beast, and we hope for that great day when the full sovereignty of the Palestinians over the entire Holy Land shall be restored, with al-Quds as its capital. The Zionists will be expelled from the Holy Land by the power of God.

May we merit the fulfillment of the prophets› ancient promise that God›s kingdom will be revealed throughout the world and all nations will join in serving Him.

Signed in pain and anger, In the name of Jewish Holocaust survivors,