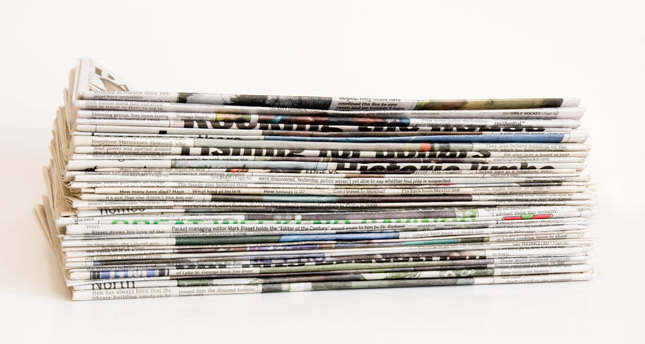 by İsmail Selim Eşsiz Aug 04, 2014 12:00 am
The word "news" comes from the word "new" but you already know that . I wonder though, what is a journalist supposed to do when the news isn't so new anymore?

As the profession relies on being the quickest to break the news, news articles that are telling stories of a past time. This is a problem if our main concern is informing people, which journalists claim to do. Let me give you an example. Last week two travelers were found dead in the southeastern Anatolia Region of Turkey,supposedly murdered. I offer my sincere condolences to their loved ones. Since they were traveling on their motorcycles a huge outrage erupted amongst motorcycle groups in Turkey. This led to even more media coverage, and soon nearly all media outlets were reporting on it in one way or another. But I can't help but wonder, after the heat of the event starts to die out and is eventually forgotten by nearly everyone, how many of these outlets will report on the arrest of the killers? Let's say the arrest takes place one year from now. I am willing to wager not much. Don't our readers deserve closure?

This contradicts with our aim of informing people. Journalists should be there for all parts of a story: Its birth, adolescence and its end. With this in mind we should be able to give our readers a full view on what is happening.

Let me give you another example. Let's say a man is sentenced to serve life in prison for a crime highly sensationalized by the media, but after nearly 20 years he is vindicated by DNA evidence. Such cases actually occur in the U.S.. All media outlets that reported on his arrest and imprisonment should also be there for his vindication as well, even if the event has long been forgotten and would fail to produce the same ratings of a more current event.

What if we uncover a fact or find something to report on but it happened one year ago? What do we do then? Can we report on it without regard for the implications since the person or organization that is the subject of our report is long gone? My take on this is: Even if the person in our report passed away there is a high probability they have children and grandchildren who are alive today. We have to consider them and treat the report as we would do with a more recent one.

What if the subject is our own newspaper? Well, both İbrahim Altay and I believe that no correction can be considered "too old." No matter how late we discover our mistakes, correcting them will give our newspaper both credibility and accountability. Several respected newspapers and media outlets in the world already seem to have adopted this mentality so we should also follow in their footsteps.

We the journalists are not historians; that is indeed true. It is not our duty and obligation to shed light on every single dark corner of the past. But it is our responsibility to see through the end if we chose to report on an event in order give our readers the full picture and of course, closure. Also it is the journalist's duty to raise public awareness on issues regardless of how much time has passed. Remember the law might have it but journalism has no statute of limitations.
Last Update: Aug 04, 2014 11:05 pm
RELATED TOPICS