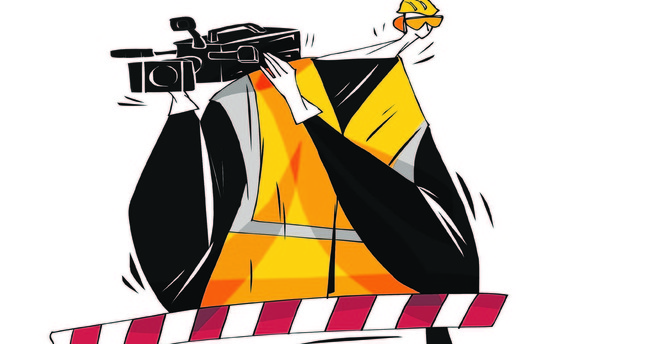 While remembering the terrible loss of Erkan Koyuncu, we must also manage to keep our cool, and let this tragedy open way to new developments in the working conditions and occupational safety of journalists all around.

The number of journalists who have lost their lives while doing their jobs is more that we can count. Some committees prepare reports on this matter and emphasize the causes of death. Murder is right at the top followed by health problems. And sometimes journalists die in places most unexpected as had happened to Sabah newspaper photojournalist Erkan Koyuncu.

Erkan Koyuncu had been working at Sabah since 1999. He picked up the mantle from his father, Selahattin Koyuncu, who was also a photojournalist and died at a young age. Because he lost his father at such an early age he named his son after him. Koyuncu was an accomplished journalist who didn't abandon his professionalism for civilian journalism, managing to stay objective and original.

That day was just like any other for Koyuncu. He woke up in the morning and went to the paper where he recieved his daily assignment from his chief: watching Galatasaray Sports Club. He had just returned from a training camp in Austria and Hungary a couple of days prior. After he picked up his camera and his other belongings he went to Florya where Galatasaray were continuing their training in Istanbul's Florya Metin Oktay Sports Complex and Training Center.

After he reached the Sports Complex he was met by a gigantic five ton anti-terror iron gate. The gate swung open to allow the team bus to enter and Erkan Koyuncu tried to follow the vehicle in. At that moment, just as Koyuncu was passing through the gate, the huge iron construct shut with Koyuncu's head caught in between.

The first response team was the club's doctors. They administered CPR and after approximately 30 minutes an ambulance arrived on the scene and took Koyuncu to hospital. Unfortunately, despite all efforts at treatment Erkan Koyuncu passed away.

The Concept of Occupational Safety

Erkan Koyuncu left behind a wailing widow and two children. His wife Bedriye Kyouncu, who was in another city with her mother when it happened, is still in shock. People called her saying "Erkan's blood pressure has risen, you have to come immediately." When she arrived, she was met by the cold face of death.

Selahattin, Erkan's son, is 12 years old and his daughter is only eight. When the incident occurred they were both with their mother and even now still refuse to believe what had happened to their father. They say, "my father will come back from work and love me just like it used to be."

When Koyuncu lost his life I was also at the newspaper and learned of the incident from his colleagues. All of their faces were burdened by the shadow of death and by the sadness of loss, all on the verge of crying. I also knew Koyuncu. When someone asks, "What kind of person was he?" Just like everybody, I can say, "he was a great man." He was kind, talented and diligent. He cared about his family and his work. His death wounded us all deeply.

On the other hand, his death caused quite an argument among Turkish media. Galatasaray reporters from different newspapers wrote about the entrance gate, describing it as an ongoing problem and said that they had warned club management but had found no solution.

Many journalists and writers called for those who are responsible. Some of them accused Galatasaray management while a prosecution investigation has started on the matter. After the preliminary investigation it surfaced that the gate had no movement or touch detectors and cameras were offline for a week. Prosecutors are waiting on the autopsy report of Koyuncu and after the results are formalized it will evolve into a public case.

As colleagues of Koyuncu, we are all in deep mourning. Therefore we have to be careful not to let our sadness cloud our judgment. Nevertheless, we have to write and say what had to be written and said.


Here are some of our assessments:

- A person, a journalist lost his life. Any person's life is worth more than all of Galatasaray Sports Club's estates and assets combined. The same thing applies to all living beings. If this event were to happen in a European country or the U.S., the club management would try desperately to fix the club's image and would probably sweat with guilt. Unfortunately, we see Turkey's sports managements don't share the same enthusiasm and we are saddened by this.

- Unless Koyuncu deliberately let his head get trapped in the gate, or in other words tried to end his own life, it means that his death is the consequence of somebody else's actions. The people responsible must be identified.

- The gate that is at the center of the argument must be inspected thoroughly. Is it built according to zoning regulations? Shouldn't a gate this big also have a pedestrian only gate next to it? Is the gate technically correct? Who decided to have it built? Who is responsible for the gate's inspections?

- This incident showed the way reporters and the club's supporters have been perceived as a threat by the club itself - which could have made a mistake impossible to correct with its misguided approach. It must be abandoned immediately.

- Clubs are under the obligation of providing safety to journalists and easing their work not threatening their lives, shoving them around, closing team practices to them and refusing the public of their right to be informed. Sports managements should be fully transparent and in that perspective should ease the working conditions of the journalists.

As I read some news I remembered a person who visited me last year. His daughter was injured in a terrorist act which took place in Istanbul. After it was reported in several newspapers the managers of the club, which the little girl was a big fan of, found the family. They said that they will provide for the girl's needs throughout her education. They even stated which private university she will attend.

After a while the management of the club changed and when the father went to the club to collect his daughter's education money the new management said that they made no such commitment and that he must talk to the previous president. The father also tried to reach the previous president but after many unsuccessful attempts he received a message from his secretary saying "Do not disturb us, talk to the club."

Now media have been given the commitments of the Galatasaray Sports Club's president Ünal Aysal. According to the Aysal news he will provide all the costs of education for late Erkan Koyuncu's two children. Undoubtedly, an approach made in good faith. But in order to be meaningful rather than mere reactionary words its conditions must be set and signed and made as a binding legal document. For how many years will the education be paid for? Which schools? Who will take up the responsibility and keep providing for these kids after Aysal steps down for the presidency? These questions must be answered clearly and shared with the public.

There are similar news that Galatasaray players also started a charity amongst themselves and will help the family. The same thing I said above applies to them as well.

Yet, whatever we do, it will not bring Erkan Koyuncu back, but we can take notes from his departure from this world. We hope that it will become a turning point for the working conditions and occupational safety of the journalists in Turkey and deliver awareness as well as changes in the law.
Last Update: Aug 11, 2014 1:42 am
RELATED TOPICS