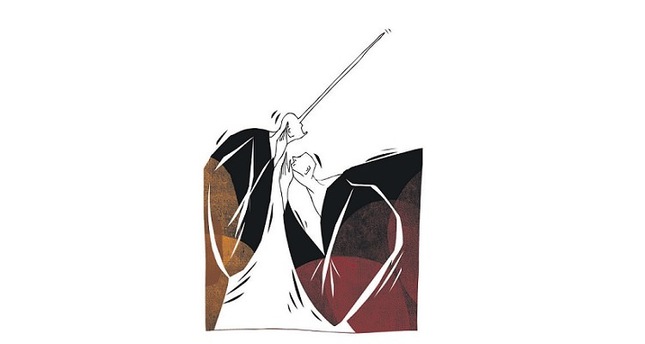 When there is a basic problem in an interview, we can assume it is either because of the lack of expertise of the guests or the lack of inquiry of the host, and in this case, both are valid

No matter how it is probably going to sound, what I am about to write is not just some distasteful joke. I was watching an interview by the U.S. Public Broadcasting Service's Charlie Rose with Bernard-Henri Lévy, or BHL as he is known in France. Let's start with how Mr. Rose introduced his guest:

"Bernard-Henri Lévy is here; he is a philosopher, he is an author and he is my friend. His latest piece appears on the New Republic website under the headline 'Shame on Turkey for choosing the Islamic State over the Kurds.' [...] I am pleased to have Bernard-Henri Lévy back at the table. Welcome."

Is it important for viewers to know that the guest is a friend of the host? Or from a different and more important viewpoint, is it important for a host to have a guest who also happens to be a friend? Will the host alter his behavior in this situation? Do you think the host confronts the guest when he makes a factual error or corrupts the truth or holds backs his questions? I think this may be the case with Rose. Let's look at some parts of the interview:

Rose: So first let's talk about Kobani and how do you see this unfolding?

BHL: Kobani is a shame. It is a shame. In Kobani you have so great people; men and women defending their families, their cities, their homes. And you have this terrible Islamic State giving the assault against Kobani. And Turkey closes its border.

Rose: With tanks on the other side.

BHL: With tanks on the other side, with soldiers. With volunteers who are ready to come and defend Kobani and Turkey closes the border. Turkey, who is, as you know, a member of NATO, a member of the military alliance of NATO. […] Today I say that there is a real problem with the Turkey alliance. Turkey, if Kobane falls, Turkey will no longer have to be considered as a reliable ally. And we should pose the question of the belonging of Turkey to NATO.

I was first surprised by BHL's manner of speaking. To me it seemed like he was talking like a fiery militant with his arms flying around, excited and theatric. There is no doubt about the humanitarian crisis in the region but I think the adolescent excitement of BHL is stemming from the role he seems to devote himself to. In this point it seems like we are watching a radical politician rather than a philosopher or a journalist. When I listen to what he says I realize this ultra-political character is not an expert, not even a knowledgeable person about the region and the world and lives in an imaginary world.

Let's start with some basic questions:

Is BHL proficient enough to understand what he is reading in Arabic, Turkish and Kurdish? If not, how does he follow the developments in the region? Why does he not give those resources in the interview?

Has BHL ever set foot in Kobani? How much does he know about the geographical, economic and social structure of the region? Other than Google Earth, what are his sources, and again, why does he not share them with viewers?

Does BHL know the border layout between Turkey and Syria? Has he been there since the crisis started in Kobani? Has he had the chance to see the events with his own eyes and learn the understandings of all sides on the issue?

Another question is for Mr. Rose: Did he ask his guest the questions above in order to determine his expertise on the issue? What does it take to be invited to the program and lobbed with easy questions? Is it enough to be a friend of the host, using relations with lobbies and personal influence in order to get an article published or starting a propaganda war against Turkey?

Let's talk about the influence and lobbying and take look at the portfolio of BHL. He was born in Beni Saf, French Algeria in 1948. His family later moved to France where he was educated in philosophy at the École normale supérieure. He started his journalism career with Combat, founded by Albert Camus, as a war reporter and covered controversial subjects throughout his tenure. He also became the manager of his father's company and later sold it to a French entrepreneur, François Pinault, which led to a lot of criticism that he used his ties with Pinault to promote his own work. Similar criticism also arose due to his friendship with Jean-Luc Lafardére, the owner of the largest publisher in France and the largest magazine publisher in the world. BHL also had many friends in literary circles and was criticized for using them to get positive reviews for his work and silencing dissenters.

In 2010 he was named 45th on a list of the world's 50 most influential Jews by The Jerusalem Post.

In 2006, he contributed to the British debate over Muslim women's veils by suggesting to The Jewish Chronicle that "the veil is an invitation to rape."

Gilad Atzmon has called him an "ultra-Zionist, pseudo philosopher," who lacks the elementary capacity of a philosopher.

As I said in the beginning, this is not some joke. In light of what we saw so far, do we have to take BHL seriously as a philosopher, author or a journalist? I think not.

It was noted that most of the reviews published in France of BHL's book "Qui a tué Daniel Pearl?" (Who Killed Daniel Pearl?) did not mention strong critiques of the book given by experts and Pearl's own family, including his wife Marianne Pearl, who called BHL "a man whose intelligence is destroyed by his own ego."

In his 2010 essay "De la Guerre en Philosophie" (2010), Lévy was publicly embarrassed when he used, as a central point of his refutation of Kant, the writings of French philosopher Jean-Baptiste Botul.

In April 2013, he was convicted by a French court for libeling journalist Bernard Cassen.

The interview went on. Apparently BHL isn't aware that hundreds of thousands of people from Kobani fled the war and took shelter in Turkey. He also doesn't know that the People's Protection Units (YPG) fighters who ran to Turkey have permission to return to Kobani in order to fight ISIS, yet they choose not to. He seems oblivious to the attacks of the Democratic Union Party (PYD) on other Kurdish parties in the region. The same goes for the knowledge of Turkey providing a corridor for Iraqi Kurdistan Regional Government (KRG) peshmerga forces but how they didn't use it. He doesn't know because The New York Times just published a factually incorrect editorial saying Turkey only allowed 200 peshmerga soldiers to pass through to Kobani while hiding the fact that the PYD was the one who limited the number. He continues:

Rose: Why do you think they're doing it?

It seems that just like other members of Israeli lobbying BHL is also obsessed with Erdoğan and focuses his train of thought on opposing him. There is no actual problem here but these sentences may result in a good laugh.

BHL: Remember the sentence of one of the prime ministers of Mao Zedong, Liu Shaoqi. He was asked thirty years ago what he thinks of French Revolution. And he said 'Come on, it is a little early to say.' Two centuries after.

BHL might have fallen victim to a myth here. After all, the famous sentence said in 1971 was about the 1968 events in France, not the French Revolution. Since he was in France during those years, it is quite natural for him to not know the correct meaning of them, but considering the famous quote was debunked in The Financial Times, it is a little bit curious why he mistakenly used it. Also the famous sentence belonged to Zhou Enlai not Liu Shaoqi. Not to mention Liu Shaoqi wasn't a prime minister of Mao Zedong, he was the president who succeeded him.

But there is another person who should be aware of all things above and that person is Charlie Rose. If he chose his guests from experts rather than from his list of friends, he could provide much greater benefit to journalism itself.