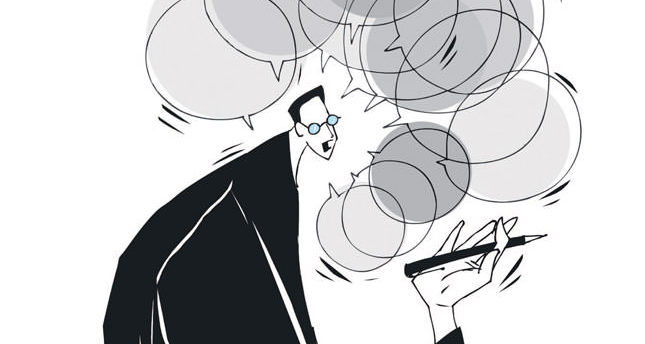 by İbrahim Altay
Nov 03, 2014 12:00 am
No matter how it seems with the rise of social media there is still a quite sizeable portion of the populace that continues to read newspapers and watch the heated debate programs on television. In fact, this part of the population remains the majority. People watch and read them as experts and expert wannabes continue to present their opinions as the sole and absolute truth to the unsuspecting viewers and readers.

Let me tell you something that might give you some perspective. For some it might even be a mind blowing revelation. A so-called expert starts with "Now in Kobani …" But he has not even left his office at the newspaper in months.

Another one says "As far as I can see, ISIS …" But the only thing this so-called expert on the Middle East has seen is the screen of a computer.

There are those who argue with them of course. A nice give and take disguised as a heated debate. One starts his argument: "According to local sources …" However the identity of those local sources or how and when our excited friend came in contact with them remains a very convenient mystery.

Of course, by far the most elaborate trick lies in the phrase, "As the whole world knows …"

Our country seems to be filled with expert journalists. These names appear on every channel and in every corner of newspapers. Of course, one person might be an expert on something, but these wunderkinds appear to be experts on everything. Yet most of them do not speak Arabic or Kurdish. Not to mention their geographical, economic and social knowledge about the region they speak of with such authority is only better than Google maps by a small margin.

Since this is the situation at hand, they only bag a couple of sentences from here and there to rebrand them as their own discoveries and thoughts. Of course, as with all things in life, there are exceptions.

I have a fairly accurate idea where all of this stems from though. You are racing against time. You do not have a lot of space. No one seems to question your "miraculous deeds." Of course all those silly long explanations do not seem very witty. It does not suit your clever persona. Isn't that right?

No sir it is not! Data, information, knowledge, thought and wisdom are all different categories. They do not substitute for one another. Tales, fictional expressions, hypotheticals, wishful thinking, guesses and testimonial expressions are not the same. They too cannot replace each other. Amid all this commotion you have a prime objective as a journalist that is to become a witness to the events happening. What you write and say should originate from that data you gained by becoming a firsthand observer. You cannot sit behind a desk all day long cruising through some tabloids and claim or pretend to be in the field. Let's be honest here. In Turkish newspapers, a quite sizeable portion of news is not the work of the reporters who work at the newspapers. In addition to these reporters there are agencies, freelancers, citizen reporters, social media users, translations from foreign media and quotes that fill newspapers. Why can't we admit this painful truth? Since we don't conjure these news stories from our imagination, we have to say, "As I read there," "As I saw here," "I heard it from this person," and so forth. This does not seem to be the case, but it should be. Otherwise, it is both unethical and a crime.

There are many of types of theft. Many think thieves are only the ones climbing up to the windows and snatching your belongings while wearing a mask – a highly caricaturized type for sure – and some might think electronic theft where hackers target your bank account. But there is another type of theft that is harming academia and journalism as well as literature. It is the theft of information or idea. When you snatch an idea, theory, study or even a wording and brand it as your own, this is theft. There are no buts about it. It is called plagiarism.

Let's start with a couple of examples. Let us say you liked a certain approach to a subject on social media and you want to use it as fodder for your article. Whether you like or not, whether it serves your interests or not, you have to question its reliability first and foremost. If you feel like you must absolutely use it, then you have to write the name of your source in the article in a clear manner.

Another example is if you liked a claim in a foreign newspaper, magazine or even website and found it very interesting, you might even have the delusion that no one else saw it. After all, you are the only person clever enough to discover it right? However, you cannot sell it as your own idea and claim the credit. You are compelled to say, "As this person claims …"

Or you might be a host of a television show and the guest you invited gave quite a speech that you liked. You cannot write about what your guest talked about by misrepresenting it as your own thoughts.

These are all examples of unethical conduct. And unfortunately, are very common in printed publications.

Of course this immorality has a price attached to it. Make-believe, truths, theories, guesses and wishful thinking become a huge tangled mess as a result.

Journalists become a tool of manipulation and provocation. Do not think the reader is blind to all these petty tricks and guises. You might get past them once or twice, but this will not prevent the inevitable outcome no matter how much you believe otherwise. They will see through your lies, half-truths and plagiarism and as a result, your credibility will be irrevocably harmed. More importantly, not only you, but also the credibility of journalists and journalism as a whole takes damage. Yet despite all of this, there are people who pretend to be great journalists even when their information is proven false and their guesses turn out to be quite off base.

The problem is very drastic indeed, but despite this, the solution is very simple and definitive. Do not plagiarize. Let us form a good chain of command for news articles as the police do with the evidence they possess. Let us explain to readers how the news article was formed by taking them through every step and sharing with them their sources and claims. In other words, let us share the responsibility. This must be done by the real expert journalists.

Do you not think that it is time for the world of journalism to get rid of journalists who think themselves to be a jack of all trades and have an absolute say on their society?