Patriarchy of the media 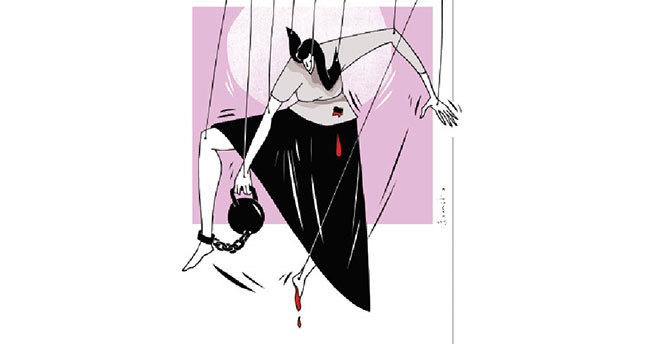 Compared to the past, media has come a long way in terms of gender equality both in the workplace and how the news is relayed, but it is clear that there are still many steps to be taken

Violence toward women is a major problem for the entire world. Every society needs to address it. Of course, media cannot stand idly by, following the motto "see no evil, hear no evil, speak no evil." However, when relaying news of this type of violence, we must be careful not to create an incentive effect or even transform it into pornography. If news of this nature is handled sloppily, then it will serve to normalize such violence, and the result will be dire: Both men and women will start to see it as a mundane affair, and some may even adopt it.

Let me give you several examples from Turkey. According to statistics, the number of "honor killings" has been decreasing in the last 10 years or so; yet, it still persists as a chronic problem. Media started to pay attention, and in turn started to report these murders intensively in the 1990s.

Previously, such murders were more prone to be swept under the rug with the cause of death usually presented falsely. Instead of presenting the actual cause of death, they were said to have been caused by falling into a well or accidental shooting, et cetera. During that era, there were no laws specifically designed to deal with such situations as well as no deterring punishments. On top of that, people in the eastern part of the country, in particular, were more prone to cover up these murders as part of the so-called culture. In other words, there was social pressure in place.

Here is an example from a newspaper of those days: In the 1980s, movie theaters faced many political restrictions because of the military coup, and it affected the sector quite harshly. Many movie theaters went bankrupt, hence to stay in business, many of those still in business had to screen porn movies to survive. In that climate, a woman went into one of those theaters because she was thirsty and thought the place was a mall. When she realized what the place was, she hurriedly left. But it did not end there. Several friends of her husband saw her leaving the theater and told her husband about it. The woman was murdered by her husband. When a reporter asked her husband why he killed his wife, the answer was: "We have nothing to lose other than our honor. What will we do if we lose that too?"

When we look at interviews with similar murderers, we can see all of them utter similar words and confess that it was the pressure of society that forced them to commit the crime. While it is the duty of media to fight such cultural codes, we realize it does the opposite and knowingly or unknowingly gives these acts some sort of legitimacy in the eyes of the public. Even though media has decided to emphasize this problem since the 1990s, the wording of the news articles was beyond sloppy. For example, making a subliminal connection between words such as honor or tradition – words that often carry positive meanings for society – was beyond wrong, since such grounds for murder undermined the gravity of the offense in the eyes of the readers.

Let's come closer to our date. The Oct. 17, 2011 issue of the Turkish daily Habertürk had a news article about a murder in its subhead. The newspaper printed a photograph of a dead woman lying on an autopsy table with a knife in her back with no blurring. The woman was murdered by her husband. Editors defended themselves by saying that their intention was to draw attention to violence against women by using the picture as a shocking element. However, there were no photos of the husband, the murderer, while the victim was displayed with all of her helplessness and nakedness. In the end it was pornographic violence.

Another thing stands out when we look at the different media approaches to depicting men and women in traffic accidents. If the one involved in the accident is a man, then gender is never emphasized. But if a woman is involved, the differences are quite visible even in the title and subheadline. I am talking about headlines such as "Woman driver hits pedestrian," "Female driver steers off the rails," et cetera.

Another problem is visible when we read news about rape. Apparently, media loves to imply that a rape victim might have "asked for it." Details such as the wearing of a seductive dress, a woman being drunk or being outside late at night, find their way malevolently into the news article. By doing so, a sinister message may be presented that indicates the woman might not be innocent or deserved to be raped.

A similar issue can be encountered if we look at news about infidelity. If a man cheats on the woman, then the wording of the report is quite forgiving or tolerant, but if the roles are reversed, then the language of the report becomes intensely cruel. Talking about how seductive or cunning a woman can be is a common enough pattern here. Men are seen as Casanovas, but women on the other hand are blamed for being immoral.

While media elites constantly belittle daytime reality shows – so-called "women's programs" that are mostly watched by housewives – discussion programs that mostly consist of men shouting at each other that air at night do not receive the same treatment. And I wonder, why both in Turkey and throughout the world, it nearly always men who do the vocalization for news clips.

In the shoes of a man

Media is gripped by men's point of view when it comes to the perception of women. Media is filled with the constant desire to either victimize or accuse women. Also, by approaching the news with this mindset, most of the media believes that the news will be more interesting.

Thankfully, Turkish society started to switch from discrimination to positive discrimination when it comes to women. Despite criticisms about conservatism toward the ruling party, women started to become more visible in social life. The issue of exploiting women's bodies is decreasing. Women's rights are better known, more appreciated and more respected by a larger portion of society. In particular, during the last decade, new laws have been passed to guarantee women's rights.

Likewise, the amount of discriminatory news toward women has decreased, and media has become more self-aware. Thanks to the efforts of nongovernmental organizations, androcentric and cruel language is being abandoned; however, despite all this, we can't say Turkish media is completely free from discrimination toward women.

In Turkey, most media executives and editors are men, causing difficulties when it comes to reflecting sensitivity with regard to women's rights issues in the language of the media. Daily Sabah is an exception to this, however. Both the op-ed editor and chief copy editor are women. More than half of the editors and designers are women as well. This also affects the editorial policy, language and design of the newspaper and casts out discrimination.