Tendency toward sensationalism in media 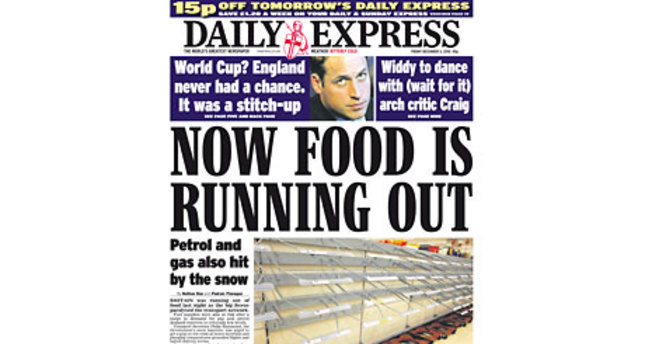 by İsmail Selim Eşsiz Dec 15, 2014 12:00 am
What urges a reporter to act on a tip? What are the criteria for reporting on a story while passing on another? Why do certain news stories make the front page of a newspaper while others are placed in the middle? While the answers to these questions are influenced by multiple factors, the most critical one is a story's news value. However, if this is the case, we are now subject to another question: What is news value, or more importantly, what gives a story news value? Unlike the previous questions, there are numerous answers for this one, not to mention they are not as universal as one might think. Indeed, even two reporters working side-by-side at the same newspaper may give you different answers as to what should be the day's top story. There are general guidelines that are largely accepted by media outlets and journalists, but I will leave a more detailed review of these values and the guidelines of Galtung and Ruge to a future article. Instead, I will to address a matter that came to our attention about a recent news story and how it relates to the issue of newsworthiness.

There was a news report that broke this week about the planned marriage between U.S. Consul General Charles F. Hunter and Turkish musician Ramadan Çaysever. While nearly every Turkish media outlet covered the story, how they covered it varied considerably. Many criticisms took place on social media about how the news of this marriage was covered, and we can identify the criticism in two distinct categories. The first category criticized the media for portraying the story as a scandal. Indeed, many media outlets decided to pursue ratings or hits by relaying the story in a sensational way, as demonstrated by their headlines, subheadings and how the articles were worded. I agree with these criticisms, especially since the story had no inherently sensational or scandalous aspect and it was wrong to portray it as so.

However, the second group's criticisms concerned how the story was covered, as it was claimed that it had no news value and the only reason why it was featured in the first place was because of the Turkish media's hunger and propensity for reporting on sensationalist scandals. This group is mistaken I am afraid. The story has news value – after all, a U.S. Consul General is planning to marry a Turkish national. So, regardless of Hunter's partner's gender or sexual preference, the story is newsworthy due to this fact alone.

How should the media report on it then? Daily Sabah's coverage was spot on and I congratulate them for their tact and good work. The editors approached the story by using the title "Top U.S. Diplomat finds Mr. Right in Turkey," which is quite descriptive and corresponds with the appropriate tone of the story. Similarly, the subheadline gives a short summary of the article without redundant remarks. The article itself included background information about both Mr. Hunter and Mr. Çaysever, followed by the details of the marriage and information about the couple receiving security clearance from U.S. State Department. The story also contained background information on the legal status of same-sex marriages in Turkey since it is relevant information.

Other than covering the marriage announcement correctly, this article should also serve as an example to any other media outlet that was criticized for practicing tabloid journalism.