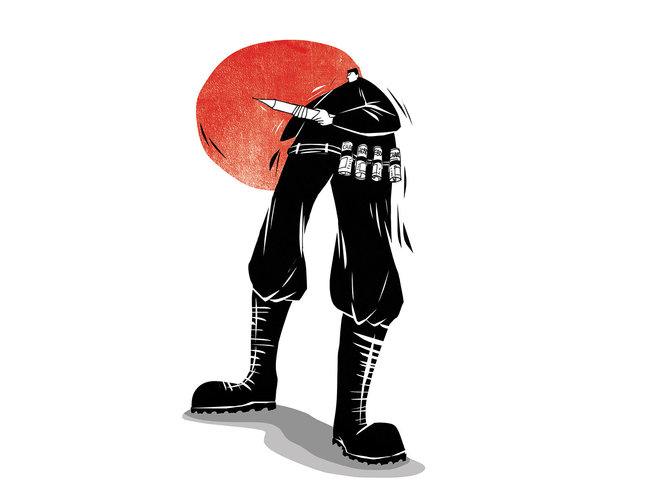 Coexistence requires us to stop seeing one another as enemies. Also condemning the attacks on Charlie Hebdo cannot take away our freedom to criticize the caricatures in the magazine

In the fourth century the Roman historian Marcellinus wrote:

"[T]hey are of great size, and bow-legged, so that you might fancy them two-legged beasts, or the stout figures which are hewn out in a rude manner with an axe on the posts at the end of bridges.

They are certainly in the shape of men, however uncouth, but are so hardy that they neither require fire nor well-flavored food, but live on the roots of such herbs as they get in the fields, or on the half-raw flesh of any animal, which they merely warm rapidly by placing in between their own thighs and the back of their horses.

They never shelter themselves under roofed houses, but avoid them, as people ordinarily avoid sepulchers as things not fitted for common use. Nor is there even to be found among them a cabin thatched with reed; but they wander about, roaming over the mountains and the woods, and accustom themselves to bear frost and hunger and thirst from their very cradles. And even when abroad they never enter a house unless under the compulsion of some extreme necessity; nor, indeed, do they think people under roofs as safe as others. They wear linen clothes, or else garments made of the skins of field-mice; nor do they wear a different dress out of doors from that which they wear at home; but after a tunic is once put round their necks, however much it becomes worn, it is never taken off or changed till, from long decay, it becomes actually so ragged as to fall to pieces. … They seem to be people always in flight. Their wives live in these wagons, and there weave their miserable garments; and here, too, they sleep with their husbands, and bring up their children till they reach the age of puberty. … and, like brute beasts, they are utterly ignorant of the distinction between right and wrong."

The "life forms" described here as "between man and animal" were no other than the Huns on a long march through Europe. An interesting part here is that Marcellinus was no anthropologist. He never actually even encountered the Huns in his life. He took the easy way out by copying what Homer said about the Cyclopes Polyphemus and what Herodotus said about the Scythians. In another words, he quoted their erroneous descriptions of their enemy.

In Homer's "Odyssey," Polyphemus was a one-eyed monster. According to Herodotus, the Scythians used their enemies' skulls as wine cups. Without any serious research and observations these baseless and cliche statements were made to separate the world into two parts, one being "civilized" and other "barbarian." Brochures and books, the media of the era, served to describe enemies by portraying them differently and were used as a type of propaganda to mislead and/or inform the public.

To understand the length of this perversion of truth let's listen to another Roman historian, Vegetius. According to him, "Huns' horses had hooked heads, protruding eyes, narrow nostrils, shaggy manes hanging down below the knees, overlarge ribs, wide-spreading hooves, bushy tails and thin angular bodies."

I realize these seem silly to you but during those times many Romans believed this nonsense.

How savage, mindless, cruel, devious or, in another words, "barbaric," Attila and the Huns were. Probably less so than the Romans. Serious historical studies show that Attila was not a landless, steppe-born, starving, nomad child. When he was born, the Huns had already finished a migration and settled in Eastern Europe. Attila's father Mundzuk was the brother of Octar and Rugila, the previous leaders of the Huns before Attila. Therefore, Attila could have been born and lived in a palace of sorts.

Let me correct another mistake. Attila was not a savage who only knew about the war. He knew both Gothic and Latin. He took his power not from cruelty but from using diplomatic maneuvers to impoverish and drive wedges between his enemies. Attila's administration did not rely on intrigue and schemes unlike Rome. He did not govern over local notables with terror and force, but cooperated with them by sharing his wealth and power. On top of that, Attila was not as invasive as the Goths or Romans of the age. After he won a war he withdrew his army into his own borders and only required tribute and gifts. Considering the 1 million dead and another million turned into slaves during Caesar's invasion of Galicia, Attila can be seen as benevolent.

The world was a big place back then and people could have believed these historians since they never saw the Huns themselves. How about the movie "Sign of the Pagan" back in 1954? In the movie the Huns are depicted as barbarians without a care for private property, sanctity of family, Christian values or personal hygiene. As then Senator Joseph McCarthy would probably have liked, Attila's expansion into Europe was a long march against civilization. And the Huns were proto-communists on horseback.

What can we say about this movie then? Will we just dismiss it as fiction? Or are we going to see it as mere taste of a millennium-old bias and hostility. The answer is hidden in a famous poem attributed to Vergillius:

"Roman, remember by your strength to rule Earth's peoples – for your arts are to be these:
To pacify, to impose the rule of law,
To spare the conquered, battle down the proud."

Very familiar, don't you think? History seems to repeat itself. For example, we currently talk about high Western values and how they should be universal – human rights, freedoms, coexistence and the like.

These are good concepts no doubt. We hear them often at international conventions and diplomatic negotiations. But whenever a crisis arises high values disappear and people are forced into one of two choices: "You are either with us or against us," as former U.S. President George W. Bush said after 9/11: "Either you are with us, or you are with the terrorists." Now we see the same thing after the attack on the French satirical magazine Charlie Hebdo. If one does not say, "Je suis Charlie," they are presumed to be a terrorist. Former French President Nicolas Sarkozy already defined the attack as "a war declared on civilization." In his head, uncivilized people are not limited to the attackers and their abettors.

Is the situation really that hopeless? I think not. Saying Charlie Hebdo's caricatures were racist, xenophobic, homophobic and Islamophobic does not mean we approve of the terrorist attack that resulted in the loss of 17 lives, 12 at the magazine.

By admitting this was an attack on the freedom of expression and ideas, we are not giving the caricatures that allegedly led to the attack a taboo status. This attack should not strip us of our freedom to criticize Charlie Hebdo.

The first issue of the magazine after the attack printed over 5 million copies, not just in French, but in other languages too. The Turkish version was printed by the daily Cumhuriyet, but the editors of the newspaper chose not to print the caricature depicting Prophet Muhammad. They explained their decision by saying: "They did not print it to respect the beliefs and values of Turkish people." But two writers from the newspaper disagreed with the decision and put the cover in their own articles.

There was a similar problem for media companies around the globe. They argued about sharing the cover with their readers. The New York Times decided not to while the Washington Post was in favor of publishing it. ABC from Australia published it with a warning. In Canada the CBC and Radio Canada differed in their decision even though they are under the same roof and committed to the same ethical guidelines. This served as an interesting example showing how the same ethical guidelines in theory can be different in practice.

A pinch of respect

If we get back to the beginning of the story, the world is not made up of divided plateaus anymore. It resembles more of an enormous village. In this village we must find a way to coexist with the world's citizens and we have to do it in a peaceful way. Therefore, would it not be better if we did not insult each under the guise of criticism and humiliate each other while using jokes as an excuse.
If we see other parts of the world as uncivilized societies, as bats living in a dark cave, we will also normalize insulting what they hold sacred. However, it is possible to link the freedom of speech and respect toward sacred things by seeing them as part of human rights. The road to this is crossed by not allowing hate speech in our newspapers.

We can start by condemning the attack on Charlie Hebdo, but not printing the new cover in our newspapers.