The rise of financial journalism 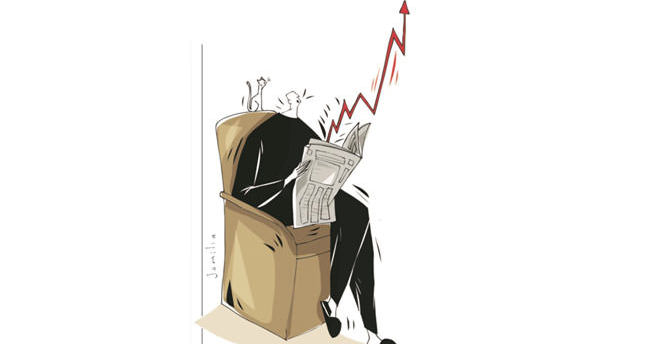 With the rise of the free market and growing interest of people toward economy, financial journalism emerged as an independent field of expertise and comes with its own ethical controversies

Today, financial news is an inseparable part of daily newspapers, and financial journalism has become one of the principal fields in journalism. In Turkey, financial news takes up at least 14 percent of newspapers; considering the fact that some of the news in the culture, politics and sports pages are also related to the economy, this ratio often favors financial news as well.

When we compare Turkey to Western societies, the birthplace of journalism, we can say that journalism arrived late in Turkey. Financial journalism as an independent area of expertise arrived even later.

First, let me emphasize the relationship between a country's economic structure and journalism. The fruits of the Industrial Revolution and the rise of the bourgeoisie, colonialism and globalized, intercontinental trade led to the enrichment of European societies. The importance of money and capital movements, the allure of entrepreneurship and the distribution of wealth between different parts of society also increased people's attention to the economy. As the financial system became more complex, their curiosity grew as well. Financial journalism adapted to and addressed these changes. Demand gave way to supply, and financial news and articles increased in newspapers.

We can observe that as the accumulation of capital increased, publishing papers solely focused on finance gained momentum, including Paris' La Cote Dlesfos in 1825, Zurich's Schwezerishe Handel Zeitung in 1861, Milan's Il Sole 24 Ore in 1865, Tokyo's Nihon Keizai Schimbun in 1876, Brussels' L'Echo in 1881, Madrid's Espana Economica in 1893 and Copenhagen's Borsen in 1896. Two newspapers excluded from this chronological list are the Financial Times, which was founded in London in 1888, and the Wall Street Journal, which was first published in New York in 1889. These two continue to be among the most prominent financial newspapers in the world.

During the same period, however, we cannot really talk about serious financial journalism in Ottoman society. Newspapers back then had several news stories about the economy, but this was not seen as an area of expertise, largely due to the lack of interest in the economy, finance and economics as a science in Ottoman society. According to Ahmet Güner Sayar, in the 19th century, there were less then 100 copyrighted works written in Ottoman Turkish on finance. During the same century, the number of Russian works on the topic was nearly 3,000.

After the proclamation of the Republic of Turkey, choosing a new path in terms of financial reforms became an absolute necessity. At conventions, such as at the İzmir Economic Congress, these financial problems were placed on the table. Society's interest toward the economy rose after encouragements – albeit controlled – toward the free market. In 1928, Zeki Cemal Bey founded the Ekonomi (Economy) newspaper. Later, Ahmet Sukuti Tukel followed in his footsteps and founded İzmir Ticaret (İzmir Trade) in 1942, which continues to publish.

Despite the founding of these two newspapers, there was not much development in financial journalism in Turkey. These publications covered micro subjects, such as raises, costliness, illegal meat distribution and other related issues, and were less of a newspaper and more of a bulletin. As for newspapers, the very first economy page was published in Milliyet in 1963. It began as a half page, but later turned into a full one. The page also featured columns apart from news articles.

As a center of life

Mainstream newspapers in Turkey today dedicate at least three pages to financial news. The developments that have occurred since 1980 play a significant role in this as well. The Jan. 24 decisions undertaken by Turgut Özal foresaw the international expansion and globalization of the Turkish economy. This policy transformation was very important; instead of a closed, statist economy and social structure, a liberal economic policy was adopted. The market was transformed in both size and definition, and it reverberated in journalism as well.

Independent economy pages soon began appearing in Turkish newspapers. As financial developments increased, so did the number of those pages. First, the financial newspaper Dünya began being published, but when newspapers were not enough to handle all the news and stories, financial magazines were founded.

The type of financial journalism that became commonplace during this time changed as well. The traditional way of engaging in financial journalism at the time was replaced with another model called "cep ekonomisi gazeteciliği" (pocket economy journalism). In this model, we see that the language of the news articles became more understandable for the average reader rather than financial elites or individuals in the business world. With this simplification, the economy turned into a field more people could understand. Of course, this relationship goes both ways; as more people became well versed in financial language, some terms that had been otherwise pointless to publish found their way onto the front pages of newspapers.

After 1980, the economy carved a path to the center of social life. In 1986, the Borsa Istanbul Stock Exchange opened, and the idea of a financial sector partially independent from production was adopted. Moreover, terms associated with finance and globalization, such as stocks, bonds and mutual funds, found their way into everyday life and the lexicon. With developments in entrepreneurship and the free market, financial journalism also flourished.

The rapid pace of these developments also brought the necessity of expertise, which gave birth to certain ethical concerns. Just like war, diplomacy and sports journalism, financial journalism also requires expertise and experience. Reporters and writers aiming to work in this field should possess financial knowledge apart from journalism. They should also know how to analyze balance sheets, understand the numbers and be well versed in production processes and the financial literature. Knowledge isn't enough in financial journalism, though. Financial reporters and editors should also find the best way to relay the knowledge to the reader so that it is understandable. There should be no missing data, and under no circumstances should information be inaccurately interpreted or manipulated.

The responsibility of financial journalism is great because it directly impacts the behavior of the public, especially when they predict and relay their expectations about the future. Let's imagine that you prepare a news article that states interest rates will decrease. That will lead citizens who have money in a bank to react in a certain way, which can influence the financial system. In another example, if you are reporting on urban transformation projects without any verification, this could result in a bubble economy and lead to bad purchases. The same principle applies to reporting about mergers, acquisitions or the selling of a company.

Another danger is using media as an advertisement tool. This mechanism works by utilizing personal relationships, public relations firms or ethically questionable practices such as hosting press tours. I congratulate Daily Sabah for not participating in such methods.