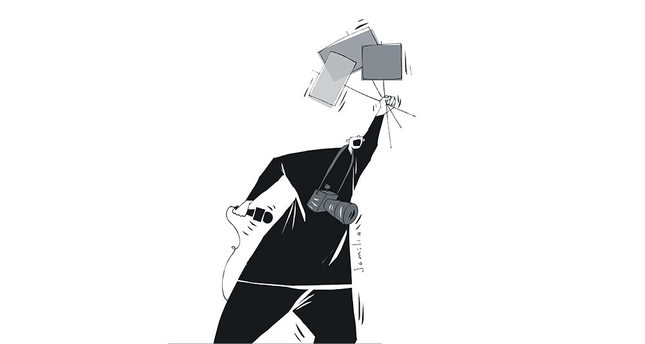 When political goals and personal ambitions get in the way of journalistic duty, we see conflicts of interest and hypocrisy disguised as false heroism in the media

I was made aware of a discussion on the website called openDemocracy through an article by Murat Yeşiltaş published in the Perspektif section of Sabah daily, Yeni Türkiye Endişesi (Concerns of New Turkey), from Dec. 23, 2014. For those who didn't follow the debate, let me summarize.

Seasoned academic, journalist and former U.N. special rapporteur on human rights in Palestine, Richard Falk, contributed his interview with Prime Minister Ahmet Davutoğlu to openDemocracy. The interview was comprised of four parts, and there was a note at the beginning by Editor-in-Chief Mary Fitzgerald. In this "warning," Fitzgerald said they thought the interview was "deeply problematic" and "sometimes enraging" but despite this, they published it. She continued saying that there were discussions among the editors on whether to publish it or not, but because the interview came from Falk and openDemocracy is a "pluralist" space, they decided to publish it.

I see this as admitting a mistake, while trying to be heroic. Fitzgerald's behavior reminded me of the last scene in the movie "A Few Good Men." If you recall, during that scene the general was overwhelmed with anger and confessed his crime. Similarly, this conduct shows the campaign to discredit and discriminate against Falk.

Despite emphasizing the pluralist nature of the site, openDemocracy published seven articles criticizing Falk and Davutoğlu, while they could barely stand just one interview with the prime minister. They also did not put any warnings on top of the seven critical articles. Not to mention these articles written by experts on Turkey were mostly irrelevant with regard to the content of the said interview. Most of them were obsessed with the Gezi Park protests and aimed to lynch Falk for relaying Davutoğlu's remarks. Some of them claimed they defend pluralism and democracy, and at the same time one said the interview should not be published under any circumstance. Both contradictory and arrogant remarks, I say.

Falk's response to this criticism was swift. He answered all accusations of his article, "Reflections on my Interview with the Turkish Prime Minister" and also made fun of the concept he called "gotcha journalism." I will not try to summarize his entire article, but I want to emphasize two paragraphs.

First, he wrote: "I was, of course, long aware that Turkish secular intellectuals in the West, especially in Britain and the United States, had strongly opposed the AKP [Justice and Development Party] leadership from the inception of its role as running the Turkish government in 2002, particularly demonizing its principal leader, Recep Tayyip Erdoğan."

I too was able to observe Falk's deduction in several scientific conventions, especially in the ones that had the tendency to turn into political ones. The source of the criticism of authoritarianism of Erdoğan and the AK Party government and likening him to Russian President Vladimir Putin is explained in Falk's paragraph. Therefore, foreign journalists writing on Turkey should be aware of this situation and err on the side of caution.

The second part that got my attention in Falk's article was: "My point being: journalists in Turkey have often in the past crossed the line between a posture of objectivity and active participation in the political life of the country. I believe some are now doing so again, but with a drastically different agenda than during the pre-AKP era.

Such behavior certainly does not justify imprisonment or banishment, but it does require an understanding of the Turkish national context in which journalists play a more overtly political role, frequently behaving as players rather than observers and interpreters. Any reading of the harsh daily criticism of AKP policies and personalities in the media would reassure even the most skeptical reader that there is no suppression of hostile commentary in present day Turkey."

I completely agree with Falk when it comes to this subject. Sadly, we see journalism and activism intertwined in Turkey. Tons of examples testifying to this truth were seen during the Gezi Park protests. Journalists became activists, and in their articles and interviews with foreign media, they acted like spokespersons of an opposition party and distorted events. They used their social media accounts to spread misinformation.

For example, there was a journalist who wrote about a police car crashing into and killing a girl named Aylin. When he realized it was far from the truth, he deleted the tweet, but because of what he started, many were already in the streets protesting.

Another journalist wrote about how his son was beaten by police and now nowhere to be found. Later we learned his son was not even at the protests. Several journalists told their foreign colleagues that the government was massacring people in the streets and snipers were hunting journalists. A truth surfaced later on, but by then it was too late.

Another example I remember was about a young man. I knew him from a cafe in front of my newspaper. He was overweight, and this led to him having problems walking. On the newspaper's street he passed away because of heart failure in front of my eyes. Afterward, on social media I saw several of my colleagues from the same newspaper saying that the man died because of teargas shot by police.

Of course I am saddened by the loss of lives because of the excessive use of force by the police. I want those responsible found and punished according to the law. But that does not mean I have to forgive the distortion of facts by Turkey's journalists and making it seem as though the government massacred people.

Universal principles are clear on the issue. Under no circumstances should journalists lose their impartiality toward any person or group. They should not become actors in the event they document and should treat all parties involved equally. They should report events regardless of their feelings and avoid fanaticism.

However, media in Turkey is far from ideal. Militant journalism is still quite popular.

Media's role in all this

While writing this article I have the Turkish magazine Lacivert's February issue. In the magazine there is a story covering how 1997's lawfully elected government was toppled illegally and what role the media and journalists played in the Feb. 28 charade.

I would like to quote media reports from that time to demonstrate how a line between journalism and political fanaticism can be blurred.

Merve Kavakçı was a member of Parliament at that time and was precluded from taking her oath in the swearing-in ceremony because of her headscarf when Bülent Ecevit said, "Please put this woman in her place." Her children were booed by their peers because of the event. Hürriyet Editor-in-Chief Ertuğrul Özkök wrote of it:

"History will write the importance of Ecevit's outburst and speech and what was prevented by it in Turkey. The lesson given by those little children when Ms. Merve went to school to pick her children up is the first sign of knowing her place."

However, history's course did not unravel as Özkök predicted, and now there are a number of members of Parliament who wear a headscarf.

Columnist Güneri Civaoğlu asked, "What if Merve Kavakçı takes her oath at midnight, and the whole thing becomes a fait accompli?" Later on he answered his own question with another, saying, "Who knows what some people will do at midnight?" This was clear humiliation and a threat.

Fatih Altaylı took it a step further in his article, "Yeni Vatandaşlık Görevim" (My New Responsibility as a Citizen), saying: "I found myself a new job. From now on I will personally deliver people violating the dress code law to the police station. I will show their homes to police. If they are in a car, I will report their plates. I will also follow the procedures in the prosecutor's office."

I congratulate the magazine's editor-in-chief, Meryem İlayda Atlas, who is also Daily Sabah's Op-Ed editor. It will serve as an eye-opener for those with a desire to understand Turkey.