A means to an end 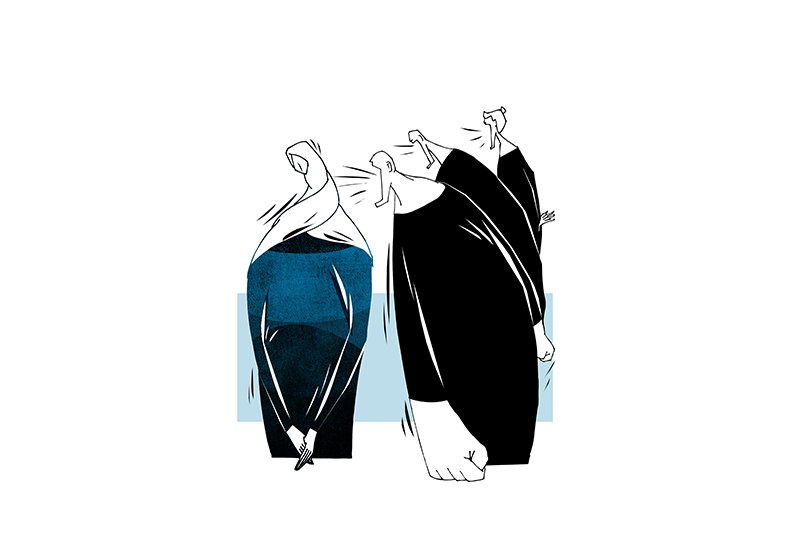 When the issue at hand is clearly about politics and not journalism, discussing it in the confines of newspapers and TV channels will only serve to reach inconclusive results as both sides are only interested in the propaganda value of the event

The event in question took place on June 1, 2013, or in another words, it was during the most heated days of the Gezi Park protests. Let us read it from the testimony of the woman, Z.D., who claimed that she endured both verbal and physical assault:

"I was waiting for my husband to pick me up. Large crowds were marching to İnönü Stadium from Karaköy, insulting others and beating those who defied them. From my right a group of men and women approached. In front of them there was a woman with a Che Guevara shirt and jeans. She pulled my headscarf and insulted me. A man slapped me. I didn't get a chance to see him because I was holding my stroller. I fell down and the crowd surrounded me. They insulted me, spat on me and kicked me on the ground. One person was shaking the stroller as my daughter was lurching inside. I couldn't free myself to protect my child. I put my face down and couldn't open my eyes."

The event was in Kabataş, a district about five minutes away from Taksim. The young woman that gave this testimony also said that she had returned from Büyükada by ferry after a picnic with her 5-month-old daughter and her family. Kabataş is an important transportation point in Istanbul. There is water and land transportation as well as a link to the metro. It is also very near to the prime minister's office. Let's continue with Z.D.'s statement.

"After the event, I was in a psychological shamble and I couldn't bear to leave my house for days. Because of the horror I endured my milk went dry and I couldn't breastfeed my baby. When I finally left my home, every time I saw two people walking together I feared that they would attack me. After I got a little better I lodged a complaint with the district attorney's office."

Turkey has been arguing over this event for almost two years. As the general elections draw closer, the heat of debate has once again heightened. Several journalists and politicians who were in favor of Gezi Park protests – of whom some also took part in the protests - have claimed that the event in question never took place and it was fabricated by the young woman. Also, the four female journalists who were first to interview Z.D. and bring the matter to the public eye are accused of lying and manipulation.

When we take a look at the whole debate from an outsider's perspective it is clear that the issue is more about politics rather than journalism. All sides are clinging to their own political positions and care only about the event's propaganda value rather than its validation.

People who took part in the Gezi Park protests claim the attack never took place because they wish to paint the protests as peaceful, humanist and nonviolent. But we know that this is a bit of a stretch.

According to a report from June 23, 2013 by the Ministry of Internal Affairs, protestors damaged 337 businesses and 58 public buildings, broke 68 MOBESE cameras and rendered 45 ambulances, and 214 private and 90 public transportation vehicles were unusable. The Justice and Development Party (AK Party), Republican People's Party (CHP) and Peoples' Democratic Party (HDP) buildings were also targeted during the protests.

I am not presenting these facts to disrespect those who lost their lives during the protests or to defame the goals of the protests. Nothing is more important than the lives of the people and nothing can excuse the excessive use of force by the police. I present these facts to show there were violent groups in the Gezi Park protests as well. Similarly, when the argument for reporting this attack misleads the public and a breach of journalism ethics came from Gezi Park supporters, it leaves something to be desired in the area of sincerity. After all, during the Gezi Park protests one of the most monumental problems was disinformation on social media and its echo in the mass media. Unfortunately, this disinformation was largely the work of protestors.

Here are a few examples:

CHP Deputy Adnan Keskin said during a program on Halk TV that a young woman named Aylin was crushed to death under a police panzer. Opposition media shared this news from social media with their readers for hours until it was proven to be false.

The images of injuries across the world were presented as if they were the products of the police brutality during the Gezi Park protests. Another deputy from the CHP, Hüseyin Aygün, shared a burn injury image found on Google and said that it was a result of chemicals sprayed by the police.

An image of an injury caused by a ship's propeller was presented as the result of police torture. In İzmir, a person wanting to reconcile with his wife said that police kidnapped and tortured him in the forest. But when his cellphone's signals were investigated his lie was evident.

A rumor was circulating on social media saying that a journalist's son was detained during the protests. Later on it turned out that the son in question was abroad at the time.

I can add much more, but I believe this is enough to convey my meaning.

Nevertheless, let us indulge the debate and take a look at this in a journalistic context. Here is what we have: A young woman claims she was assaulted by a large group. There are 11 cameras on that spot, but it appears that 10 of them were out of order during the event. The only working camera was not a municipal or police camera, but one of a ferry company. But since the camera is far from the area in question, the images are not clear. Therefore, we do not have any visual proof that confirms the woman's claim. We do not have one that contradicts her story either.

According to the woman's claim, the event took place in one minute. We cannot see what happened exactly but it is clear that the group was near Z.D. for one minute.

In these types of events the universal principle is very clear. If a woman claims to be harassed or assaulted, her claim is to be taken seriously and brought to attention. The burden of proof lies on the police and prosecutor. This is important to combat violence against woman, and when we consider how hard it is for women to report these attacks, I think the importance of this principle is quite evident.

If the woman also possesses a medical report from forensics that proves she was assaulted, we must be extra careful and thorough.

Of course, all this does not mean that we have to unquestionably accept the testimony of the young woman.
Last Update: Mar 16, 2015 3:08 pm
RELATED TOPICS