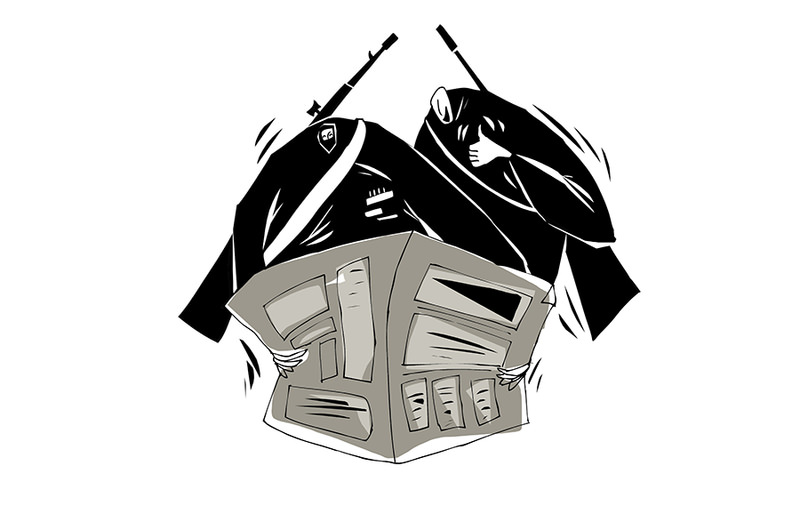 As the terrorists' main goal of spreading terror is usually achieved through reaching the masses, we need to question the symbiotic relationship between terrorism and the media and avoid turning it into a propaganda tool

The press and the media have been accused of being the terrorists' best friend. Walter Laqueur explains that the success of a terrorist campaign depends decisively on the amount of publicity it receives. "The terrorist's act by itself is nothing; publicity is all."

These words belong to famous German terrorist Michael Baumann: "We took a great interest in the press. We always immediately looked how the newspapers, especially in Berlin, reacted to our actions, and how they explained them, and thereupon we defined our strategy." In his book, "How it All Began," Baumann explains why the media is so important for terrorists: "At that time, we were already very much on that media trip … It was always great when those actions were planned. You could have a good laugh. They were really well put together, so that the symbolism would appear. And when all went well, you had great fun. We would go home and watch it all on the telly. That was great."

Ralph E. Dowling goes as far as arguing that terrorists owe their existence to the media in liberal societies. "The media are helping terrorists orchestrate a horrifying drama in which the terrorists and their victims are the main actors, creating a spectacle of tension and agony."

He was absolutely right. We observe that the media does not merely report the terror, but sometimes becomes part of it, adding to the drama.

When I first saw a New York Times headline dated March 22, 2015, I was shocked. It said: "From Minneapolis to ISIS; An American's Path to Jihad." The news article was about a United States citizen with Somali ancestry, Abdi Nur, and his story of recruitment to the Islamic State of Iraq and al-Sham (ISIS). While telling Nur's story, his alleged social media accounts were widely used as a source.

"Reading back over Abdi Nur's Twitter feed, his chilling progression from the basketball courts of South Minneapolis to the battlefields of Syria is clear."

The photo used right below the headline was a person said to be Nur holding a Kalashnikov. His finger is on the trigger and he is happily smiling at the camera.

"Jihad is the greatest honor for man. So, come on and join Dawla ya Iqwa."

"Doing Rabat in the frontlines against PKK Allahu Akbar Never felt so hyped."

In the second tweet, the word "dawla" means "state" and "iqwa" means "brothers" in Arabic.

In the article some of the web sources for those looking to join ISIS were mentioned:

"A 50-page guide for [ISIS] volunteers was distributed online in February, offering practical travel advice on what to pack, and more tailored counsel on how to avoid detection by the authorities."

Setting a standard for covering terrorist organizations, actions and terrorists has long been a cause for debate. Some journalists are for a free and peace-oriented approach while others support "responsible coverage." The first group base their arguments on the idea that one person's "terrorist" is another's "freedom fighter."

In both cases the relationship between the media and terrorists has to be based on some regulations. After all, it is common knowledge that "modern terrorists seek access to the media by committing acts that closely fit news agencies' definitions of news."

According to George Gerbner and Larry Gross, media coverage provides terrorists an idea, cause, public identity and importance. For sure, no movement can get going without some visibility.

We are not questioning whether or not we should cover events of terrorism, but rather insisting on the question of how. Aided by several mistakes in the coverage of the New York Times article, let's point out several ethical rules:

- Media must avoid turning into a propaganda tool for terrorist groups. This can be achieved by not acting as a spokesperson for terrorists. The New York Times broke this rule by quoting social media accounts of someone who joined ISIS.

Media should avoid speculating about the security forces' counter-measures to prevent terrorism. In the New York Times article, FBI methods were disclosed on how they track and apprehend United States citizens looking to join ISIS. It would not be a surprise if ISIS sympathizers find new and harder ways to be tracked down in order to flee the country.

News articles cannot be a guideline for terrorist organizations and terrorists. The New York Times article featured documents such as "Hijrah to the Islamic State" and referred to websites despite this rule.

Media should avoid using sentimental language in news articles about terrorism. By adding emotional touches, it can serve to normalize and encourage. The photos used in The New York Times and the wording of the article had plenty of that, I am afraid.

Some might agree with Larry Grossman and say: "The job of the press is not to worry about the consequences of its coverage, but to tell the truth. … As much as those of us in the press would like to be popular and loved, it is more important that we are accurate and fair . . . and let the chips fall where they may." But I think that while reporting on terrorism we must avoid being encouraging, normalizing and guiding. Otherwise we will be doing their advertisement rather than reporting news. Thus, in its present state, The New York Times article looks like an advertorial rather than a news piece.
Last Update: Mar 29, 2015 9:26 pm
RELATED TOPICS