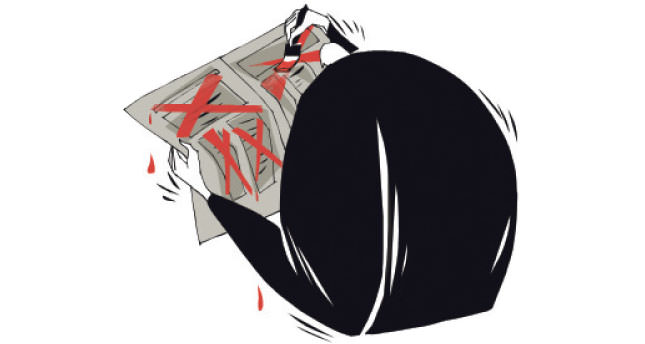 When it comes to covering terror attacks, the media in Turkey made a poor example after numerous mistakes followed the attack that targeted prosecutor Mehmet Selim Kiraz

Last week, we wrote an article titled "Covering terrorism: An uneasy symbiosis" in response to a NY Times headline, "From Minneapolis to ISIS." We criticized them for their mistakes, yet this week showed that when it comes to covering terrorism, Turkish media was not that different from the NY Times.

Let's start with several basic principles we underlined in the previous article:

-The most important aspect of terrorism and its strategies is the propaganda. Terrorist organizations spread their propaganda via newspapers, television channels and websites. Therefore, media organizations and journalists should be vigilant to avoid turning into their PR agents and becoming a reason for the existence of terror.

- Media organizations and journalists must uphold the public good while covering terrorism and avoid giving them a sense of justifiability, public identity and importance.

Media organizations and journalists mustn't normalize terrorism and should refrain from painting them in a favorable light. They shouldn't find excuses for terrorists' actions either.

Media organizations should avoid becoming part of their plots by means of dramatizing their actions disproportionally.

Goals of the terrorism

Adding to what we wrote last week, we can say that terror actions don't just target the people or groups they attack but rather put the entire society in the crosshairs. Journalism is the profession that is harmed most and at risk from their actions.

The main objectives of terrorism are to spreading fear and terror and disrupt society; damaging the ideal of living together in harmony by creating a situation that leads to conflict between people or groups; destroying the belief in democracy, therefore rending democracy null.

The relationship between democracy and terrorism is quite pivotal. The freedom of speech and ideas provided by democratic systems are used to spread propaganda of violence by the terrorists and thus leaves us with a zero sum game. Therefore, journalists mustn't allow terrorists to destroy democracy by manipulating democracy itself.

Summary of the events

Now that the intro of our article is over, let us remember this week's events. On Tuesday March 31, 2015, two terrorists struck at the Istanbul Court of Law and took Prosecutor Mehmet Selim Kiraz hostage. They hid their faces with masks as ISIS does, and the first thing they did was to tie up the prosecutor and take a photo while holding a gun to his head. They uploaded it via social media, and it spread like a wildfire. With that photograph we saw that the terrorists belonged to a group called Revolutionary People's Liberation Party-Front (DHKP-C). They are perhaps known to our readers from the United States since they also staged an attack on the U.S. Consulate in Ankara via a suicide bomber. We also know that this terrorist organization took an active role during the Gezi Park protests in 2013.

We have to mention that, unfortunately, this photo taken by terrorists for propaganda purposes was used by many mainstream media organizations. Some newspapers ignored the backlash of the public that followed. In their April 1 issues Hürriyet, Cumhuriyet, Posta, Birgün and Today's Zaman used the said photo in their headlines. They completely ignored the principles that should be followed when covering terror victims. They disregarded the potential trauma that the prosecutor's family and society will suffer by exposing violence towards the victim.

After a while we heard that the Courthouse was emptied, and security forces surrounded it. Some newspapers even wrote that the police positioned themselves on the same floor as the terrorists and prepared to launch a rescue mission. This time as well, the mistake is evident. We know that hostage rescue operations should be followed by journalists at a safe distance. Many incidents throughout the world show that when media becomes too involved in such operations, the result is loss of lives. When covering terrorism, journalists should avoid speculating about plans and precautions of the security forces and actions of the terrorists.

Unfortunately, as we all feared from the beginning, the terrorists murdered Mehmet Selim Kiraz despite eight hours of negotiations. After that, the police raided the room and killed the two terrorists.

I am afraid the media in Turkey failed this test. Professor Raphael Cohen-Almagor said in his 2005-dated report: "Terrorism is conceived as inhuman, insensitive to human life, cruel, and arbitrary. To remain morally neutral and objective toward terrorism and to sympathize with terrorist acts is to betray ethics and morality."

Some journalist in Turkey not even bothering to remain neutral, developed narratives that excused the terrorists and justified their actions. CNN Türk anchorman Mirgün Cabas, Cumhuriyet newspaper reporter Ceyda Karan, Radikal newspaper columnist Fehim Taştekin and former NTV speaker Banu Güven were among those. These people held the government responsible in posts on their social media accounts by presenting justifications for the terrorists' actions. A tweet from Mirgün Camas said: "There is only one lesson to be learned no matter the outcome. Do not shoot children and do not boo the mothers."

For our readers not living in Turkey, let me explain what it means. Imagine that while the hostage situation in Koşer Market in Paris is still unresolved, a journalist tweets, "The reason for this situation is the French injustice toward Muslims." What would you think after reading it? Or consider the same tweet aimed at a situation where ISIS takes an American tourist hostage. Would you appreciate such a tweet?

The mistakes weren't limited to those I mentioned above. Some journalists and media organizations were insistent on not calling this a terrorist action or classifying the hostage-takers as terrorists. Some others classified the DHKP-C as a "far-left" organization. Giving terror an ethnic, political, religious or ideological identity is an unacceptable approach. Lastly, Radikal newspaper and several others told dramatic stories about the lives of the two terrorists and emphasized their youth – actions that can only result in the normalization and promotion of terrorism.

With this last terror attack we saw that by dealing with politics intensely, journalists are more prone to make mistakes. These people are violating the line between journalism and activism. One of the main principles we should all do well to remember is this: Thinking "My terrorist is good" is a very misguided notion. After all, terror is like a boomerang; therefore, do not be happy that it struck others because tomorrow you can be its next target.
Last Update: Apr 06, 2015 2:18 am
RELATED TOPICS