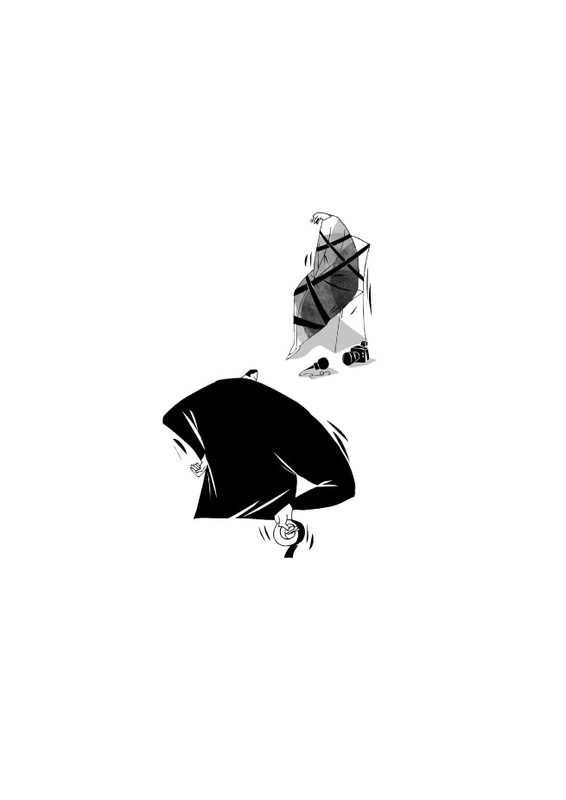 Since the restrictions on media are not solely placed by the governments in Turkey, like many believe, we have to take a look at other organizations that hold their archaic methods over freedom of the press to serve their personal and political agenda

In Turkey, it seems to an outside and untrained eye that all violations of free media come from governments. This is especially true in the case of watchdog organizations that release yearly reports on freedom of speech and media. You realize that these organizations are not aware of the different power players manipulating the media and thus they dump all of the blame on the political authority.

However, the truth is quite different from what they paint due to their insufficient information. In recent days, a corruption allegation was raised about the fortune of a member of Parliament who raised her left hand while taking the oath in Parliament. There were several credible documents backing these allegations, but only six daily newspapers out of 39 deemed it necessary to feature this information on their pages. Others simply ignored it because the member of Parliament in question hailed from the Republican People's Party (CHP), and in the latest local elections her husband was also elected to be mayor of a district of Istanbul under the same party's roof. Important parts of the media chose to self-censor instead of relaying it to their readers and viewers. I think it would be safe to say that the government took no part in applying pressure in this instance, as it would damage their opposition.

A similar case of self-censorship is also evident in the case of another opposition factor of the government: the Turkish Industrialists' and Businessmen's Association (TÜSİAD). Founded by the wealthiest businessmen in Turkey and nicknamed the Bosses' Club accordingly, TÜSİAD consists of a small number of members with oligarchic tendencies rather than all businessmen. And printing a news article concerning corruption about any of them is as hard as printing one about the government at the very least. This small group holds a large part of the media and commerce and rules by what seems like unwritten mafia rules. They don the cloak of democratic warriors but adopt an internal caste system that is far from democratic.

Another power that manipulates the media is the judiciary, which is supposed to be impartial. Yet, we previously saw its bias during the Kurdish Communities Union (KCK) and Ergenekon trials. In those instances we witnessed security bureaucracy the acting as a crutch to the judiciary.

Today, I will talk about another power that threatens media freedom though. For that however, you need to be familiar with two organizations critical to Turkey. The first is the Supreme Electoral Council of Turkey (YSK), a board consisting of judges and is responsible for the coordination of elections that take place in Turkey. The second organization is the Radio and Television Supreme Council (RTÜK). Its duty is to monitor radio and television broadcasts and regulate them via sanctions if necessary.

These two organizations fire a volley of penalties in every election period because of a law written in 1974. I want to emphasize the year 1974 because back then, there was only one television channel, and it belonged to the state itself. In order to ensure political impartiality of this state channel aiming to broadcast for public good, several standards were put in place. According to the law, during elections, every party that throws its hat in the ring during elections has to get equal coverage in news broadcasts, discussion programs, talk shows, etc.

Yet, today there are more than 100 TV channels currently broadcasting in Turkey, and therefore, such a regulation contradicts the logic of private broadcasting. More than 20 political parties take part in the elections, and some of them don't even organize a single rally during their campaigns. Considering how new media technologies paved the way for new media conduits that lessened the impact of television channels, we can safely say that the law that has been in effect since 1974 has become obsolete and lost its effectiveness.

The two organizations we mentioned above not only ignore how obsolete this law has become, but they use this archaic method to punish the media. Last week more than 10 television channels received broadcast suspensions according to RTÜK's suggestion and the YSK's decision. The penalty of broadcast suspension is this: Whichever program receives the penalty is removed from the roster during the penalty time and replaced by documentaries chosen by the RTÜK. The criteria of the selection process of these documentaries remains ambiguous, and the majority of them are productions of quite poor quality.

We also see that these penalties are not distributed equally, and some channels are singled out and receive harsher treatment. During the last week TGRT Haber, A Haber and 24 TV were the frontrunners in penalties received with nearly a hundred broadcast suspension penalties combined. These three are all channels that can be described as pro-government. This also shows the government itself has no effect on these penalties.

This isn't the first time these television channels have received similar penalties. In previous elections they were once again on the receiving end of similar sanctions. Broadcast suspension penalties given by the YSK according to reports prepared by RTÜK have been transformed into a biased, planned and systematic intimidation and suppression policy for quite some time. The recent penalties show that by specifically choosing several channels, these organizations aim to punish media, journalists and viewers rather than ensuring applications of archaic laws.

Undoubtedly, no organization has the right to dictate to private television channels how to do their broadcasting. These decisions by the YSK and the RTÜK are at the very least an approach with heavy authoritarian tendencies. It seems that this approach also aims to oppress and intimidate the media by suspending democratic rights and freedoms. These penalties ignore freedom of the press and cause substantial damage to media systems.

Most importantly, intervention by these organizations also destroys editorial independence and forces every media organization to broadcast uniformly. Everybody should understand that reviewing the broadcast policy of a media organization is the job of viewers, not official organizations. Insisting on ignoring developments and changes in media technologies will prove to be to no avail. It is high time that lawmakers and enforcers understand the difference between state and private broadcasting. Trying to destroy the colorful atmosphere produced by hundreds of different television channels in order to achieve uniform broadcasting via unfair methods because of a political agenda is extremely wrong and shortsighted.

The Turkish Media Association published a bulletin in the past week on these recent penalties:

"As the Turkish Media Association, we condemn the YSK for using its means to destroy freedoms and RTÜK for laying the foundation for their actions. We advise them to use their timetable to review their decisions rather than holding it over broadcasters like the sword of Damocles, taking meticulous measurements. These organizations must adopt a more democratic, transparent and fair process.

"The judiciary should stop acting as a spectator to the current situation. We ask the Grand National Assembly of Turkey (TBMM) to change legal regulations that enable media manipulation and serious exploitations in order to bring a more libertarian approach."

This quote also shows that the problem with the freedom of the press is a problem of the system itself and should be resolved with the participation of all players involved.
Last Update: Jul 12, 2015 10:07 pm
RELATED TOPICS