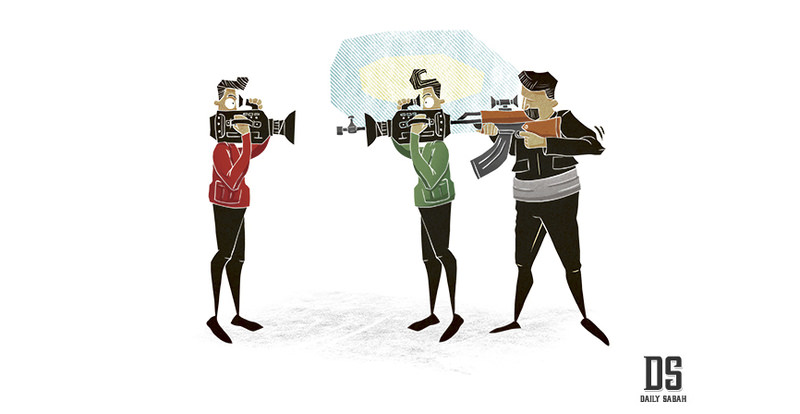 Freedom of press in Turkey has come across its share of invisible fences throughout its history, which in turn gave birth to self-censure and, if the incidents of last two months are any indicators, the fence that poses the biggest threat for the freedom and safety of journalists is terror

International conventions are usually the foremost platform for colleagues to pick at each other's brains and gain insight on related subjects in different countries. I, too, attend similar organizations pertaining both to journalism and media ombudsmanship. One of the most common questions I've been asked pertains to media freedom, and those who ask want to know whether or not media is free in Turkey. Those asking the question are usually journalists and they think that freedoms are quite limited in Turkey, getting worse by the day. These same people usually also know that I work at a pro-government newspaper, so they expect me to dispute their views on the matter in order to claim freedom in media is well established in Turkey and they ready themselves for an argument.

I have to confess, I take an exceptional delight in disappointing them. I agree with them and say they are absolutely right. Turkey has quite a lot of problems concerning media rights. However the reasons for that might not be what they assume them to be.

I start by telling them the invisible fences theory. Think of a house without a fence surrounding its yard. Homeowners decide to get a dog. However, in order to stop the dog from ransacking neighboring yards and escaping, they install a buried electric fence around the yard and a sensor on the dog for a while. Each time the dog tries to pass the fence it gets electrocuted and decides against it. After a week of this type of operant conditioning the dog learns and accepts the limits of the house and the yard. Even if the fence is no longer there, it doesn't cross the threshold. This is an example of invisible fences.

Of course this theory can be applied to journalism, and after doing so, we can assume a self-censuring mechanism acts as the invisible fence. Imagine for a second that you are a journalist living in Turkey. You publish an unfavorable news article about a businessman. The next day, your boss calls you up to his office and after berating you for your report, fires you. Of course the rest of your colleagues hear this altercation and its consequence. In turn they shy away from reporting on that businessman in a negative light.

Take for example a media baron who owns quite a number of newspapers, television channels and magazines. That baron uses this enormous media power to manipulate the economy as well as politics and is ruthless toward its opponents. So far, for the last 20 years nearly every media outlet owner who quarreled with him was either locked up for different charges, lost their companies or escaped abroad so as not to share the fate of their less fortunate counterparts. Wouldn't you be quite reluctant to write a news article about this media baron?

Of course media owners or businessmen are not alone in provoking similar reactions. We can expand the examples to community leaders, mafia bosses, political figures and so forth. Of course when it comes to forming invisible fences in Turkey, politics and the economy are not the sole factors. Ideological, social, historical and cultural factors and experiences also limit the freedom of journalists. These prevent journalists from being brave and objective as they are supposed to be. When we look at the picture described above, an absolute freedom is of course out of the question. Any countries that share similar invisible fences also share the similar problems.

So far what I am talking about might sound slightly abstract for our readers. Allow me to make them more concrete through examples and current situations.

The single biggest threat and obstacle to the freedom of media in Turkey is terror. We do not have to look to back too far in time for examples. Just two months ago, a Marxist terror organization placed a bomb in the cafeteria of the Star newspaper. If not for the timely discovery and intervention, this attack could have easily claimed the lives of dozens of journalists. Less than a month after this attack, the same newspaper was targeted again. Star Media Group owner Murat Sancak was shot at in his car. There were 22 bullet holes in the vehicle, and by luck Sancak is still alive.

Many journalists have been attacked in locations where the PKK terrorist organization is active, as their reporting has been hindered and sometimes stopped entirely. These reporters were beaten either by PKK members or its supporters.

There were other violent attacks that are still under investigation. Latif Erdoğan, a columnist at Akit newspaper, was attacked and had his nose broken by unknown assailants after he joined a program on the A Haber channel. Similarly, this previous week Hürriyet newspaper columnist Ahmet Hakan was attacked by four assailants who broke his ribs and nose. Although the motives and connections of the attackers are still being investigated, classifying an attack on a journalist in front of his home or after leaving a television program, as – organized or not - terrorism, would not be amiss.

This previous week the attack on Hakan was not the only action aimed at the media though. Journalist İlhami Işık shared a threatening message he received on his social media account. The message addressed to Işık's son-in-law said: "Mister Hakan! I hope to god that you and your father learned your lesson after the incident with the store. If your father-in-law works for the AK Party [Justice and Development Party] in this election and you support him in this, you will share the fate of those policemen at the gas station. The Turkish state can't save you."

All of these examples indicate the same thing: Terrorism in Turkey has become a very serious threat to the freedom of the media. We will also continue to talk about other big obstacles hindering Turkey's freedom of the media in future articles.
Last Update: Oct 05, 2015 1:24 am