Propoganda machine and the role of media 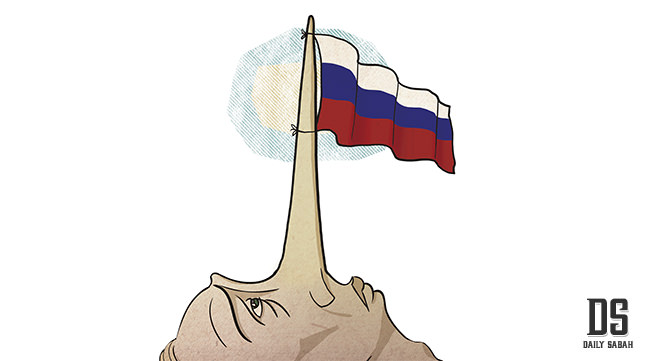 by İbrahim Altay Dec 07, 2015 12:00 am
In the 21st century, we have seen many shifts in historical paradigms and approaches to them thanks to the accumulated experience of humanity and new developments in communication technology. One of the most visible of these shifts is soft power's triumph over hard power. The chief distinguishing factor is the grey area between them – namely, propaganda.

Merriam-Webster defines propaganda as "ideas or statements that are often false or exaggerated and are spread in order to help a cause, a political leader, a government, etc."

For a more comprehensive description we can look at "A Chronology and Glossary of Propaganda in the United States," by Richard Alan Nelson. He said: "Propaganda is neutrally defined as a systematic form of purposeful persuasion that attempts to influence the emotions, attitudes, opinions, and actions of specified target audiences for ideological, political or commercial purposes through the controlled transmission of one-sided messages (which may or may not be factual) via mass and direct media channels. A propaganda organization employs propagandists who engage in propagandism – the applied creation and distribution of such forms of persuasion."

Of course, limiting the usage of propaganda in the 21st century would be wrong, as its evolution has been imminent affecting national and international politics and events as well as many sectors in the spectrum. Most notable of these is the advertisement sector, which was conceived with the purpose of using propaganda not to promote political interests but to promote a brand to accomplish economic results.

But, let us return to the history of propaganda for a brief moment to understand the latest events and the propaganda war between Turkey and Russia following the downed Russian fighter jet on the Turkish-Syrian border.

In the modern sense, propaganda is a concept introduced in the 19th century. During British colonialization, several methods of propaganda were used to consolidate British support. The abolition of slavery in the Western world can also be considered a breeding ground for propaganda methods since in both Britain and the United States abolitionists employed propaganda heavily to recruit supporters and even soldiers in the case of the American Civil War.

Wartime usage of propaganda came a bit later, as World War I engulfed the globe. Demonizing opponents and encouraging allies were the main goals in the use of propaganda as we have seen in Germany, the U.S., Great Britain, the Ottoman Empire, et cetera.

In World War II, the trend continued as Nazi Germany formed the Ministry of Public Enlightenment and Propaganda prior to the war, with Joseph Goebbels at its helm. The ministry required every journalist to register to continue working. Allies countered with their own media as well as propaganda tools like movies and cartoons. Both the Cold War and the post-9/11 period showed us that the crosshairs of public opinion could be easily manipulated if the situation demanded it.

Naturally, "The country needs you!" posters are thing of the past; however, today manipulation efforts are largely carried out by the media or, in other words, by the fourth power.

The latest application manifested itself during the crisis between Turkey and Russia after a Turkish jet downed a Russian that violated Turkish airspace on the Turkish-Syrian border.

First let us analyze the Russian side:

The first approach of the Russian state-owned media as well as its government was to spread propaganda that the Russian jet that was shot down had not crossed the border into Turkey, making the attack an unprovoked and completely unexpected one. However, the Turkish side released a radar map showing that the plane did indeed cross the border, which was later confirmed by independent third parties. As for the map that was largely featured in the Russian media, it was simply a geographical map with a visible red line that could have easily been created with Photoshop or even Paint, for that matter. Nevertheless, the Russian side stuck to their argument for a considerable time while awaiting the official report.

Following the initial blunder, the Russian media changed their story, claiming that the downed planes had received no prior warning. However, Turkish officials stated that the plane was warned repeatedly. Specifically, the Russians argued that since their planes had violated the Turkish border for only 17 seconds, there was not enough time for repeated warnings and, therefore, claimed the Turkish side was lying. This time, propaganda gained a stronger foothold, as it seemed plausible indeed.

How could Russians be warned repeatedly for five minutes if the violation only lasted 17 seconds? How could the Turkish jets respond so quickly if the window of time was so short? In this case, we see how the facts can be manipulated with just a small surgical omission. In fact, the Turkish side issued its warnings as the Russian jets approached and flew near the Turkish border, while scrambling their jets as a precaution. Yet more than a week later, we still hear the echoes of this propaganda on message boards and comment sections all over the Internet. The latest in initial propaganda efforts on the Russian side have been to claim that the downing of the jet was completely unexpected.

However, looking at a few past news articles, this can easily be rebuked. For example, look at a Daily Sabah news article, "Turkish Foreign Ministry summons Russian ambassador over second airspace violation," published on Oct. 5. After these violations the Turkish side once again announced its rules of engagement when it comes to the border it shares with Syria. This also refutes the Russian media's labeling of the event as an "ambush."

On the flip side of the coin, many Turkish media organizations approached the event with a fear-mongering mentality. In the first couple of hours after the downing of the jet, war scenarios were laid out, natural gas was cut off, Turkey's tourism sector was in shambles and the economy was ruined, according to headlines. Undoubtedly, this approach allowed the media to make substantial hits at the expense of their credibility.

The initial stage of the propaganda was abandoned completely last week, as the Russian government and its media sources tried a new approach. First, they started to cook up a propagandist casus belli similar to the approach they took during their annexation of Crimea from Ukraine. According to the Russian rhetoric, Turkey is a supporter of DAESH, and they have the proof. By feeding the hype, state-owned media outlets pointed to the press release of the Russian Defense Ministry. With military attaches from different countries present, the Russian side started to bombard public opinion with seemingly technical and sophisticated images, maps on big screens and even larger lies. By using previously accepted but unrelated news articles and information about DAESH and its oil trade, the Russian propaganda machine scattered its manipulation in small but conceivable dosages. The purpose was clear. After being heavily bombarded by this extensive "coverage," one can't help but concede under the premise, "They must be right with this much data." This tactic is commonly used in courtrooms until a judge has enough proof to deem the evidence in question unrelated. These tactics may hint that Russians are returning to the Soviet-era, in terms of propaganda. However, trying to convince the international community that an oil convoy can cross from DAESH-controlled regions into regions controlled by Kurdish forces to reach Turkey may prove to be a difficult task, especially with a fabricated map that resembles a cartoon.

On the other hand, the Russian state and its media continue to argue that Erdoğan and his government are its adversaries – not the Turkish people or Turkey as a country – to justify their actions. In contrast to these claims, however, the discriminatory treatment of Turkish nationals on Russian soil tells a completely different story. The Russian media continues to demonize Turks to such an extent that it is comparable to WWII-era propaganda. Russian politics are another matter but the actions of the Russian media will go down in history as a disgrace, especially if these demonizing attempts take root in society, potentially leading to tragic consequences.

Lastly, I would like to remind everyone that the truthfulness of a news article is not determined by how much it supports your views, but by its ability to present facts in an unbiased manner.

The propaganda war between Turkey and Russia will most likely continue. Therefore, let us put some punctuation here, as this subject will likely continue to be the topic of discussion in the upcoming weeks, if the situation demands it.
Last Update: Dec 07, 2015 4:59 pm
RELATED TOPICS