Patriarchy of the Media, does it continue? 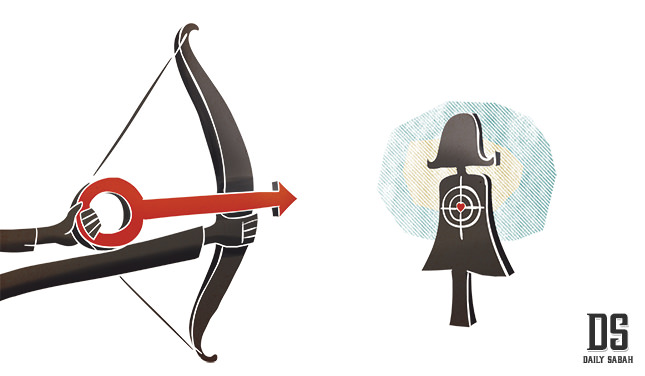 Amurder shocked the nation to its very core at the beginning of 2015. The rape and murder of Özgecan Aslan brought new momentum for women rights groups and made way for talks of more deterrent legal precautions. It also forced us to look at violence against women on a grander scale as we look at the factors other than the law that are responsible for society today. Media was no exception.

Aslan's murder was not, however, the first indicator of the problem with the media, not by a long shot. In fact, on December 2014, a month before the murder, we published an article titled "Patriarchy of the Media" in order to take a look at the media's mistakes and its enabling attitude that persisted in one form or another over the past few decades. Now, a year after that article, we will once again try to pinpoint the media's mistakes and establish several principles to avoid them.

Writing this article one year after the previous one is a good way to ascertain whether any progress was made over the year, but another reason for it is the Conference on Urgent Action to Stop Femicide that took place on Nov. 27. As part of the Femicide is Preventable campaign, the conference also studied the period between 2009 and 2013. The media's attitude toward the subject was also a big part of the conference, and t it largely got a harsh report card from the study.

Before sharing the details of the report, let us start with two basic approaches of the media to the problem. Turkey has a long history of "honor" killings, and before the 1990s, the media was either blind or an accessory to them. Both had drastic consequences. By being blind, murderers got away from social persecution and the realization of the problem was postponed. As an accessory, the media gave murderers the outlet they needed to claim they committed the murder because of "honor," and this won them social acceptance.

After the 1990s the media's attitude changed and journalists started to recognize violence against women as a serious problem in society. They believed more exposure would help and started to pay closer attention. While exposure made the public realize the scale of the problem, the wording of news articles left much to be desired. Fighting faulty cultural codes is the responsibility of the media, but doing so requires more than a hastily positioned magnifying glass. After all, the social pressure was already high before the 1990s. By continuing to use words like "honor" and "tradition" when describing the killers' motives, news reports continued to legitimize them in the eyes of the public. They also made the mistake of delving into the victim's life with words like "betrayal" and "infidelity," which has a negative impact on society. This solidified the mindset that the victim had it coming.

The problems do not end there, either. The media has always had two tendencies when it comes to the subject. Either subliminally accusing women while legitimizing their murderers or victimizing women and therefore contradicting their empowerment and positive discrimination for them. The first approach is doubtlessly more problematic than the other, but what many fail to see is that both of them are far from ideal.

In the study, the campaign also released its "Guide to Reporting on Femicide," which aims to instruct the media on how to use a correct approach. First of all, the guide describes femicide as: "When the answer of the question: 'If the victim was a man, would you still kill him?' is 'no' then that murder is femicide." On the global scale the term is still a cause for argument and has many different meanings, therefore we will continue to use violence against murder as the debate over the term is not the subject of this article and we wish to cover a larger perspective than just murder of women.

One of the first points the report made is the question of whether violence against women should be reported in newspapers. Some editors consider that reporting on these stories causes them to become normalized. However, in order to prevent normalization while reporting on violence against women, media can adopt a problem-oriented attitude instead of an event-oriented one. According to the guide, this can be done by reporting on studies on the subject, expert opinions and legal proceedings of similar crimes. Focusing on the latter will also help to erase the public feeling that after a regular news cycle, everything is forgotten. Reporters should follow up on their articles in order to inform the public of the outcome. If the outcome proves a deterrent, the sense of justice for the public could be restored. If not, public opinion would force lawmakers to make the necessary changes, or in other words, a win-win situation.

Another important point stressed in the guide is the rhetoric used. Many articles on the subject include statements from the killer, which provides an outlet for them to legitimize their actions. But there is another error here that directly contradicts one of journalism's core principles. Victims cannot use their right to reply or refute, which in turn gives killers free rein to impose their own version of the events with the excuses designed to help them during the legal process. By extending the microphone to the killers, we also rob their victims of defending themselves.

The study mentioned that many perpetrators use the media's portrayal of the events to get "discounts" at their sentencing. According to the study, perpetrators repeat the "excuses" they gave the media in order to get lighter punishments. Rationalizing them with excuses such as unemployment, infidelity or rage should find no place in articles. The study also insists that the problem lies largely in practice rather than the existing laws, which is most regrettable.

A chronic problem in media is sensationalism. There was a news article in the Oct. 17, 2011 issue of the Habertürk about a murder in its subhead along with a photograph of a dead woman lying on an autopsy table with a knife in her back with no blurring. The woman was murdered by her husband. The editors' defense was that they intended to draw attention to violence against women by using the photo as a shocking element. However, there were no photos of the husband, the murderer, while the victim was displayed in all of her helpless, lifeless nakedness.

This example brings us to graphic violence. While the above example is the visual version, words can have the same effect. Headlines like "Shocking details in the bloody murder," "Husband butchers entire family" are also in this category and should take their place in the old relics of media along with racism.

While the study largely deals with violence against women, the media's portrayal of them has other problems as well. For example, a double standard is quite visible in articles on traffic accidents. If the accident was caused by a man, his gender is never mentioned, but if it was a woman then headlines like "Woman driver hits pedestrian" or "Female driver steers off the rails" suddenly pop up. This may not seem as urgent as the ones above, but this mindset also paves the way of the media's problematic portrayals little by little.

Magazine sections also share the blame, especially when it comes to articles about infidelity. Men always seem to get a free pass with a harmless Casanova-type portrayal while women are portrayed as the evil character from a drama series.

In order to summarize, let us point out the core principles:

-Do not turn a blind eye to violence against women. Observe the balance between this and normalization with overexposure. This can be done with a problem-oriented approach instead of an event-oriented one.

-Do not sensationalize the news by using graphic violence. Words can lead to this as easily as photographs.

-Do not rationalize perpetrators by using excuses like "rage," "infidelity" or "honor." Printing their statements when their victims are unable to share their portrayal of the events is also against the core principles of journalism.

-Do not accuse women or victimize them further. This will not only serve to maintain the status quo, but also pave the way for further crimes of the same nature.

Let us end here, with the hopes of attaining an improved approach from the media when it comes to reporting on violence against women next year.
RELATED TOPICS