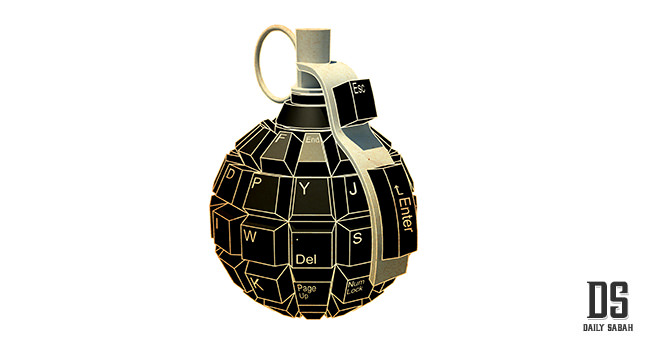 When we started writing this article, our hearts were already heavy with the latest bombing in the nation's capital, Ankara, which took place on March 13. When that attack took place, we had already put the finishing touches on the Monday issue of our paper. Yet, a couple of hours later, we received the news of the Ankara bombing and altered the front page of the March 14 issue of Daily Sabah.

Since that day, the main article of this week's issues of Daily Sabah was determined once again. For the third time, we were going to be analyzing the coverage of local and international media organizations, and if the past were any indication, several criticisms are in order. However, terror struck once again, this time closer to home, in Istanbul. The attack left four dead and more than 30 injured. The venue of the attack was also a well-known place for both locals and tourists, as it is one of the most iconic places in the city: İstiklal Avenue. Alas, the main subject of the article remained unchanged, as the mistakes of the media become all the more evident with the more internationally known location.

Let's start by wishing a hasty recovery for all those who were wounded during both terror attacks and convey our solidarity to the friends and families of the ones we lost. Media, always vigilant to cover the amount of dead and injured, always have the tendency to forget those left behind. That tendency is at the heart of this article.

Rush to the top

Let us start with the Istanbul attack's coverage, as the memory of the media's blunder in this case is fresher in our minds. Initial reports by various Turkish agencies and news websites started to pop up minutes after the attack, clearly racing against each other. Some articles contained merely a couple of sentences, and some were cut mid-sentence as the rush to be first to break the news left little room for any editorial checks. The mentality of "publish first, edit later" on the digital side of news reporting was ever present during these initial reports. Of course, certain facts were fuzzy as well, facts such as the location of the explosion, the number of casualties and others. An early article had only reported that there was an explosion in Istanbul and nothing else. I am sure that did wonders for all those who have friends and family living in Istanbul, as they did not even have peace of mind regarding the facts surrounding the explosion or where it took place.

Even with this "full steam ahead, no breaks" attitude, these news websites were beaten to the punch by social media – as expected. If the goal of this sloppy handiwork was to let people know that an explosion had taken place, social media already did that and more. The people, however, turned to news organizations to receive more coherent and detailed information – information they could be more certain of after they heard about the bombing from social media. But the initial reports were not equipped to provide them with that. Yet, by waiting a mere 15 minutes, these reports could have confirmed the location, provided a general sense of its effective zone and the expected number of casualties. That would have been helpful, but alas, it was not the case. They came in later, indeed, but this initial cluster of inadequate news only served to strengthen the belief that media is a sloppy mess and not a source to be trusted any longer.

While the initial reports were inadequate and in some cases faulty, they at least did not have enough material to completely disregard other media ethics. No, that job fell squarely on the news reports that came in later. By that time, calls were made, commentary was being made and visual material was reaching the headquarters of the newspapers. In Istanbul, a video recording of the bombing at practically point blank range was captured with a camera looking at the street – a video that anyone can see has no clear benefit for the rhetoric of a news article; a video that provides no new information that cannot also be said through text. Yet, some news organizations considered it a good idea to feature it on their websites with the ever-present and ever-effective warnings of "our readers may find this video disturbing." It would be naïve to say that these videos will not exist on the Internet, but that does not mean that we have to give a free pass to the media to allow easy access to them.

The use of images fell under the same category as well. With obligatory censorship, the violent aftermath of the bombings in Ankara and Istanbul were portrayed in detail through numerous photos taken on the scene. As I said in the beginning of the article, while media pays attention to the death toll, those who are left behind seem to escape notice.

Lastly, let us remind our colleagues of the basic principles of covering terror attacks once again. As the country goes through these turbulent times, it is clear that media should also adapt and leave covering news about terrorism to experts on the matter; otherwise, all we do is continue to serve as a megaphone for the terrorist's goals. As I said in the August 3, 2015 dated "Covering terrorism in turbulent times" article:

"Hiding terror attacks from the public gives birth to doubt toward the media. Instead of hiding the news, we should report on it quickly, truthfully and completely.

When reporting on terrorism we must stay clear of provocative titles without exception. Inching toward sensationalism in this area only serves conflict rather than peace. Using inflammatory language while focusing on horrifying details about the attack only serves the purpose of terrorism and provides a breeding ground for notions like hate, contempt and revenge.

We must be respectful of the grief of those hit by terrorism. Using photos taken at funeral ceremonies, especially close ups of grieving loved ones of victims, is wrong. If possible, photos from funeral ceremonies should not be used at all.

In articles, we should not feature quotes or hate speech of those who instill hatred, ethnic discrimination and racism in the public, no matter who they are."