We need a global constitution 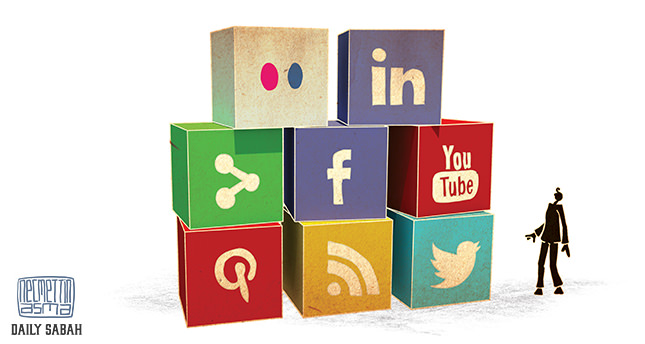 Who do you think is the biggest media owner in Turkey? Well, I can almost hear you going, "What is there to know, it is this or that person." Technically, you are not wrong, but it does not mean you are right.Let me ask another question: Is there a media owner in Turkey bigger than media companies such as Google, Twitter, Facebook, YouTube and others? After all, these media companies also operate in Turkey.

It is high time we face the truth. There is a new reality in the media, a reality that changes the meaning of media ownership and its size. If we are to approach the media as a plot of land or an apartment, we can say that every single one of those rooms is already owned by several companies, some of which I mentioned above. And the rest of us can only rent a room. Actually, the picture is graver than that since we cannot just pack up and move elsewhere without changing our line of work.

In order to simplify the matter, let us say that we are allowed to set up our own booth in a vast media hall. In our booth, we are also allowed to display our own merchandise. But the hall remains theirs no matter what, and they can confiscate our products whenever they want. No matter how much we sell, they always profit more from our products. As we work harder, they gain value. On top of all of this, we become more dependent on them every day.

Around 27 years ago, scientist Tim Berners-Lee invented the World Wide Web. Yet when he said, "We need a global constitution – a bill of rights" two years ago, perhaps he was sharing our concerns, asking for a Magna Carta. After all, in our age, our physical realities are being altered by digital realities every day, and what is produced in the digital world has real ramifications on the physical one. Moreover, the conflict between the law of companies and countries becomes more visible, that much is true.

Berners-Lee also mentioned that the new system needed to be "democratic, open and transparent." He stressed that "the Web was under increasing attack from governments and corporate influence." While both Berners-Lee and activists on the subject aim to protect Internet users from state influence, the situation became far more complex than just standing up to overbearing states. It is no longer enough to protect users against governments.

Users of the Web also need protection from the new digital feudal lords: Mega corporations who ride in the guise of a knight in shining armor, swearing to uphold freedom.

We cannot simply ignore the major problem of legitimacy. On one hand, we have the legal agreements produced by societies, while we have these companies presenting their commercial contracts as new legal ground on the other. We cannot simply chalk it up as the way of modern times.

Some say this is a consensual relationship since all of us use the web and its products by automatically agreeing to the conditions presented to us. But that is not enough to explain the situation. After all no contract, no agreement can allow companies to have free reign when it comes to violating basic human rights.

Rights of the people

A mechanism that records our every step, every bit of information about us in order to sell it later is a serious problem. Search engines show how the panopticon is not merely a sadist fantasy. Ignoring the fact that there are already people upholding and enforcing the laws in the name of society, these companies grant themselves the authority to make legal decisions irresponsibly and authoritatively.

We have seen one of its latest examples with Facebook's sanctions on Turkish daily Yeni Şafak. The rate these mechanisms expand their area of operations along with their attempt to monopolize advertisement business on the Internet is a threat to free trade and competition. Look no further than Google advertisements. Many websites look warmly on these advertisements, but in the long-term, it is nothing more than a monopoly that will remove all options on the market.

A headline that appeared in a Hungarian tabloid, "Dictator Google," is significant from this perspective. Similar "authorized irresponsibility" and "high-handed" approaches are also common in other companies. Furthermore, the privileged status of these companies when it comes to subjects such as taxes is also quite disconcerting.

Not champions of free media after all

For the last couple of months, the trial of Cumhuriyet daily Editor-in-Chief Can Dündar and Ankara bureau chief Erdem Gül has been followed closely by both local and international media. That two journalists were charged with espionage inevitably brought arguments concerning media freedom. Media organizations around the world are watching the trial and update their coverage with great promptness. We also wrote on the subject here in the Reader's Corner, "Pursuing truth as top court blunders," back on March 7.

Even consulate mission chiefs have taken center stage at points in the trial, as we mentioned in our article "A curious case," which was published on March 28.

The reason I mentioned the coverage by media as well as the presence of diplomats was to drive home that this is indeed a highly publicized case, and for that reason, what follows was doubly problematic.

Before the court hearing on April 1, three reporters who were there to follow the proceeding were attacked: Nazif Karaman and Dilek Yaman from the Sabah daily and Kemal Gümüş from the Star daily. The attack occurred in the courthouse. It is somewhat ironic that an attack against the press took place in the court where justice was supposed to be served, while covering a case that brought arguments concerning media freedoms.

The event started after the reporters mentioned above asked Can Dündar why he was suing journalists who were publishing coverage critical of him. Sabah reporter Karaman insistently asked Dündar if there was a contradiction in that he was suing those in the media, while he was claiming to be a defender of freedom of the press and ideas. Instead of answering these questions, Dündar chose to point out the reporters who were asking the questions to those who were there to support him. This approach led to things getting out of hand, as the crowd gathered around the Sabah and Star reporters to stop them from asking the questions. They proceeded to harass the reporters, at first verbally, which after a while evolved into physical harassment.

In the scuffle that ensued, a writer from the Cumhuriyet daily, Murat Sabuncu, threw a punch at Sabah reporter Yaman. This was corroborated by witnesses at the scene, as well as camera recordings of the event.

We convey our sympathies and best wishes for our attacked colleagues, while standing with them in solidarity. We also expect the authorities to ensure the safety of journalists as well as to bring the attackers to justice, these bullies who wish to silence the press.