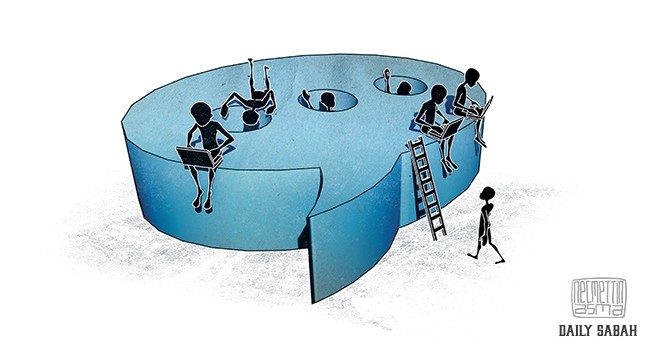 Illustration by Necmettin Asma - twitter.com/necmettinasma
by İbrahim Altay May 23, 2016 12:00 am

With the help of research prepared by the Media Association and University Media Association, in order to find out their expectations of the media we can look at the habits of university students when it comes to spending time on the Internet

It has been a while since we started to accept that the digital reality started to win over the physical one in terms of information. While we still cling to habits from the past as much as we can, one by one we are starting to accept this new reality. We all want to feel paper in our hands, but convenience wins out, and we turn to e-book readers from time to time. Encyclopedias gather dust in libraries since we have faster and more accessible alternatives. The days are gone when we were children and read encyclopedia entries ranging from Armillaria – a type of fungus and thought to be the largest organism on earth, for those wondering – to the French Revolution. Nevertheless, "Nostalgia is a seductive liar," as George Wildman Ball said. So we have to drop the nostalgia glasses and try to understand the cogs behind the changes of today.

In those articles we were not able to pay specific attention to the young generation since we had other survey questions to cover, but we hope to address them this time with the help of another study.

But before moving to that, we have to stress the shifting paradigms in terms of what is a newspaper and what is not. Lately, the word paper seems to have lost its importance with digital newspaper versions starting to show signs of becoming drivers of media companies. Even news websites without any sort of newspaper attachment find themselves in more prominent positions than mainstream newspapers that rely only on paper versions.

This shift appears to upset some of our colleagues. They look and see a bleaker picture than warranted, one might argue. For example, I would like to quote a conversation with colleagues in a meeting, a conversation that laid the foundation for one of my earlier articles: "Winds of change in conventional journalism."

"Journalists currently face one of their biggest dilemmas. Some time ago I was sitting in a cafe with three friends who had several years under their belts in the profession. As expected, the flow of our conversation brought us to the subject we have been arguing about for the last decade. One of us sipped his coffee and with a saddened sigh asserted: 'Journalism is dying my friends.' He then continued to present supporting facts for his argument such as low circulation, a lessening market share in advertisement and so on. When the rest started to agree with him, I could not help but say: 'My friends. What is dying are the paper newspapers you have been working for years. This is what saddens you. I can't wrap my head around it, as you are not in the business of paper import/export. You are journalists. Are you producing news or do you run a print shop?' "

Indeed we are not running a print shop, nor are we in the business of paper import/export. We produce news for our audience, and when that audience is the younger generation, we might have to take cues from the sectors I mentioned above provided we do not bend the principles of journalism to cater to their needs.

Looking at the research

Since we turn to digital versions of newspapers as a viable and perhaps future prominent medium, it would be wise to first know what the audience expects from the Internet itself. In this article we will look at those expectations, habits and perhaps discern complaints. As it is the habits and expectations of the younger audience that we want to find, let us look at a recent study that aimed to find out just that.

The Media Association and University Media Association prepared the study "Digital Habits of the Youth." I would like to start by thanking both of these associations for the study they prepared. In this case, the word youth seems to be university students in Turkey. The study was undertaken between April 1 and April 30, with 810 students chosen through multistage, stratified random sampling at 40 universities, 22 of them state owned and 18 privately owned. The questions in the study concerned students' habits regarding the Internet, ranging from social media use, choice of shares in terms of content, advertisements on social media and their Internet purchase patterns.

Here are some of the points from the research with some commentary:

University students using the Internet mostly to communicate with friends: 37 percent. Those who said boredom is the reason are in second place with 18 percent. Watching videos was the third-most common reason with 15 percent, while those who said research is their motivator were 10 percent.

Instagram is the most often used social media platform for university students, according to the research. A surprise, and it perhaps points to the stagnation of Facebook, which was a previous winner in some surveys. Nevertheless, Facebook is second with 26 percent followed by Twitter with 17 percent. Not much of a surprise there. Snapchat was fourth with 10 percent, but keep in mind it is a social media platform relatively new and it appears to be carving out a place for itself.

However, when we look at student gender the ratings change, as male students prefer Facebook as their most used social media platform, while female students opt for Instagram. Snapchat is also in flux when we change the category of students since 14 percent of those surveyed at privately owned universities use Snapchat most, but the number falls to 6 percent when we look at those at state-owned universities.

Of the students surveyed, 22 percent of them had more than 500 followers.

As for ads, 54 percent of students close them immediately without watching, while 37 percent only watch sometimes if it catches their attention. Those who find them interesting and watch them all are a meager 3.5 percent. Considering that adblockers were a subject we looked into in past pieces, I have to add that finding out their practices in the matter would be a bonus for research. Another thing to note here is that 61 percent of the students said that they would not buy a product advertised on the Internet.

Also, 69 percent of the students support the idea that brands be more involved on social media.

Lastly, let us look at the point most relevant to us. Seventy-nine percent of the students follow the latest events both in the country and abroad through social media. For those who want to reach the latest developments and news, 38 percent use news websites and 34 percent use Twitter.

So what does this data tell us? First of all, the increasing usage of both Instagram and Snapchat could imply that students prefer visuals rather than simply text. Galleries on many news websites, however shoddily prepared, might tell us that media companies aim to fulfill this demand. But doing so haphazardly only alienates readers, as it was seen that they would rather not have things pressed on them, evidenced by the lack of preference in terms of their reluctance to purchase products through ads.

Since we started to talk about ads, the data we saw only reinforces our points we made in the article "We reap what we sow with adblockers." Not only do they remain completely ineffectual to 54 percent of the students, most of those remaining, 37 percent, only chose to watch them if they are interesting enough.

The support for more involvement from brands in social media shows us that media companies should also make their presence felt in social media. In the past few years, nearly all news media sites added widgets and opened social media accounts to fill this need, but there is still room for improvement, especially when it comes to interacting with the audience instead of making it a one-way street.

Lastly, I would like to say that 38 percent of usage when it comes to news sites is neither disheartening nor encouraging. Considering the main purpose of news sites is to relate the news, a leadership without a majority tells us that social media will gain more traction if we remain stagnant. However, it's worth noting that news shares of official media company or journalist accounts still encompass a sizeable portion of Twitter traffic for this category.

Even though research made without specific attention to the students' reception of mainstream media, we can still say that to appeal to the younger generation, we need to be more visual without casting away aesthetics and be more relevant when it comes to our presence in social media.
RELATED TOPICS