Standards for a wayward sector of the workforce 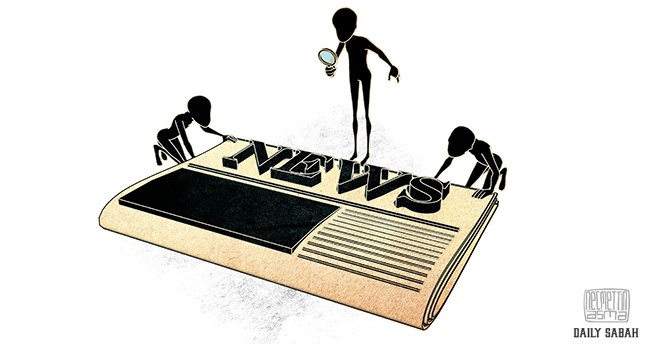 Illustration by Necmettin Asma - twitter.com/necmettinasma
by İbrahim Altay Jun 13, 2016 12:00 am

Turkish media is in dire need of professionalism, and the effort to attach occupation standards might help as long as it is not done halfheartedly

Would we expect an engineer to just wing it when calculating a building's support structure? Or a doctor to act under wide and ambiguous job descriptions, delivering babies one day and performing brain surgery the next? The days when freedom and shortcomings of self-education and master-apprentice relationships were the primary methods of entering an occupation are long over. Now there are clear-cut distinctions to vocations which are described specifically in lengthy job descriptions and education requirements. In the case of journalism, however, such stipulations do not apply as far as Turkey is concerned.

Journalism was not alone in perpetuating a Wild West mentality, however. Trade associations acted as guides for a long time in order to fill the void of a centralized system and perform their own quality control when it came to inspecting the workforce or determining occupational necessities. This freedom might be alluring at first but its lack of standards also hurt employees in many lines of work as well due to the relatively free rein it gave employers to define the job descriptions of their employees. In the last decade, however, when the EU integration process and priority for it was at its highest, a new institution was founded in accordance with Law No. 5544, which was passed on Sept. 21, 2006. This was done to address the problem mentioned here and its goal was to form and manage the National Qualification System to meet EU standards. The name of the institution is the Occupational Competency Institute (MYK).

The institute's formation was the fruit of long and eventful legislative efforts that had roots in the 1990s. However,if we are to look at the first concrete actions taken in regard to journalism as an occupation, we need to fast forward a bit and look at the collaboration between the MYK and the Directorate General of Press and Information (DGPI). With the first signing of protocol on June 25, 2013, both institutes began working to find middle ground on which to present a national occupation standard for the media sector.

Before going into the specifics of the national occupation standard for journalism, let us take a final look at the concept as a whole and how it is formed. It is still a far cry from being a complete list with only 26 sectors listed as having a national occupation standard but it seems we are getting there. According to the MYK, occupation standards provide benefits such as formation of a healthy relationship between education and employment as well as a system that is free, unbiased and quality controlled. Another important benefit here will be the ability to draw comparisons in the international arena thanks to common background.

I would also like to call attention to a distinction between national occupation standards and the national qualification system. The first one stresses necessary knowledge, ability and actions for doing the job in question successfully and provides a road map for doing so. The qualification system, however, comes later, as it takes occupational standards as a framework and specifies the necessary assessment and evaluation steps for an individual to receive a national qualification document. These evaluations must be in accordance with the European Qualifications Framework, as well.

Another important point to make is the frequency of these occupation standards. Even if the concept is rather new in Turkey, they are bound to lose their currency as time passes, or will have inadequacies as sectors evolve. According to the MYK, national occupation standards will be updated every five years at the most. It also says that the MYK can update a sector's occupation standard depending on requests for updates before the five years is up.

With the basics of occupation standards out of the way we can focus on the national occupation standards for the media. With the attendance of numerous journalists, various media workers and occupational organizations, the study offers a comprehensive overview of 10 sub-occupations in the media. The study of the first four of these sub-occupations is already finished and the MYK released their occupation standards, which were published in the Official Gazette on Aug. 20, 2015. These are reporters (Level 5), specialized reporters (Level 6) and photojournalists (Level 5 and Level 6). The levels here are classifications in accordance with the European Qualifications Framework indicating the necessary skill level. A higher number means higher qualification standards.

As standards for the entire sector are not yet complete and we have the majority of sub-occupations pending publication, our review will be bit on the superficial side. However, one of the biggest pluses of the publications so far can easily be said to be the simplistic yet explanatory nature of the language. Stating that feature as one of the core goals in the preparation of occupation standards, the publications neither use the archaic language of the bureaucracy nor the labyrinthine nature of academia. They managed to put the standards in layman's terms.

Another important thing to note here is that, while these 10 sub-occupations seem to cover mainstream media adequately, the new types of journalism did not seem to be addressed. Also, as news websites continue to present new types of jobs as the focus shifts from print to digital, the lack of specified representation of web journalists in the law has been a problem for quite some time, and since the law is in dire need of being amended, perhaps occupation standards for the media need new sub-occupations to keep up with the current situation.

Lastly, I have a technical complaint. While the majority of the work lies in the preparation of these studies and standards, they mean little for the end-user if circulation methods are flawed. On June 12, 2016, none of the already published sub-occupation standards for the media were downloadable through the MYK.

Despite a few hiccups, these occupation standards are a definitive step in the right direction that will provide more certainty in the sector and more security for employees as long as the necessary updates are frequent and the problems mentioned above are solved. Hopefully, we will review the actual standards as the final six categories are published and we will have a more complete picture.

The age of long studies and text-heavy publications as the primary form for conveying information is past, especially if you aim to reach the general populace. Now is the time to give much with less. Thus when displaying complex information in an easy to understand way, infographics are a very useful tool, which can be seen on virtually any platform, ranging from academia to schoolbooks. All varieties of science rely on them heavily; whether as an acute representation of a complicated math problem, or the formulation of linguistic principles in the form of a tree diagram, infographics are here to stay. But despite recent popularity, infographics are not a modern conception.

We need not talk about relatively recent examples, such as Florence Nightingale's examinations of the causes of death in the Crimean War, which is much too recent compared to what we have in mind. No, we must look much earlier than 1858. In the 1400s, numerous diagrams relayed information too complex to relay with words alone, such as the Trees of Consanguinity depicting family lines of notable dynasties during the Middle Ages. We can even present examples of pre-historic depictions on cave walls, but let's not go too far down the rabbit hole. In the early Renaissance, tree visualizations were the most popular form of infographics and aesthetically reached their peak. Today's infographics might not be as pleasing to the eye as their Renaissance counterparts, but they are much more capable of relaying the necessary information.

This is more important now: As the information age reaches its peak, we are hopelessly struggling against an unrelenting wave of data that threatens to overload us, as the attention we can give to individual bits diminishes. According to a study by Robert Lane and Dr. Stephen M. Kosslyn, our brains take more time to process words as they need to decode each letter or symbol to derive meaning. In cases of visual representation, this decoding time is lessened, allowing for more information to be relayed without causing confusion to the reader.

Thus it is no surprise that the media uses infographics heavily, especially if they appeal to a younger audience. Also unsurprisingly, infographics are among the contents which newspapers are least likely to be willing to allow re-publishing. Higher demand means less supply, which leads us to deduce a lack of expertise. Journalists and designers that specialize in infographics are absolutely necessary in newsrooms, and Daily Sabah is no exception. Especially when one considers that it is also one of the few methods which mainstream media can use to compete with new age media, to enable us to attract the younger generation.