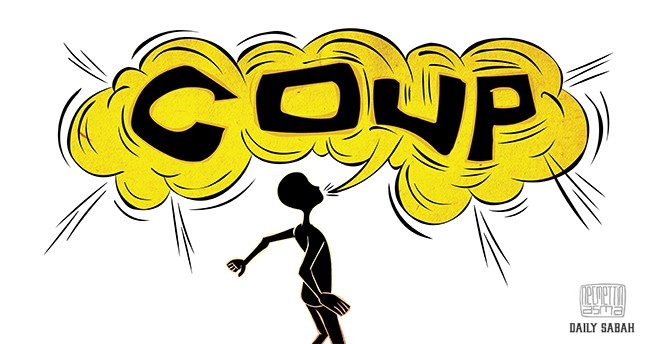 Illustration by Necmettin Asma - twitter.com/necmettinasma
by İbrahim Altay Jul 25, 2016 12:00 am

With the immediate threat of the July 15 coup attempt over, an overall danger still persists in the media, as the types of journalism styles that lay the groundwork for coups start to resurface

Blocking transportation channels is not enough for a successful coup, as conspirators must take control of communication channels as well. One can carry out a coup without tanks or fighter jets, but they cannot do it without the media.

Invasion of television channels, radio stations and media buildings was not some way to play anchor, of course. It is important to read out a coup declaration and manifesto and reach the masses, but it does not end there, as we saw a week ago.

In a democratic society, media must have two choices when it faces a coup. These are to became either a tool or a target of the coup. In other words, either you run a supportive broadcast for the coup or you cannot broadcast at all.

Of course when it comes to Turkey and similar countries, this template has a few problems. Because media has become the focus point of marginal, closed and militaristic ideological groups' desire to gain control of the country rather than undertaking the task of informing the people. Even though media and the public have been becoming more closely aligned with the public layout in the last 15 years, the danger still presents itself.

Thus this preservationist, disdainful and modernist attitude considers every maniacal method as fair game, including a military coup, when it comes to instilling their idea of public order. Even if they cannot build it, they are content to break it down.

Therefore, when it comes to countries like Turkey, there is another option. And that is coup incitement. Sometimes willingly and sometimes without intention, media can take on a function that prepares people for a coup. It lays the groundwork of a coup and tries to convince readers and viewers that the country is facing horrible consequences like civil war or partition. It pumps terror into the veins of society. Polarization and isolation are go-to themes for these circumstances. It tries to shake the public's trust in democratic institutions with false news, cooked-up stories and severe and inappropriate criticism. The purpose is to instill a mentality that says that as long as those leading the country are gone, it does not matter who replaces them, or if only someone could step in and save us.

In these times, media turns into a psychological operation base. We saw it before a number of times. Sometimes we did not even notice these sneaky and unfortunately cunning attempts.

Let's look at the media's role both during and after a coup. A glance through newspapers printed after the 1960, 1971, 1980 and 1997 military coups shows plenty of examples that represent these roles of the media.

The media's first duty was to salute the coup and its leaders with great enthusiasm while justifying it to the people. Unrelenting defenders of democracy and human rights become dust on combat boots overnight. The bravery they showed against the democratically chosen governments before suddenly disappears as they snap to attention.

The pretty makeup applied by the talk of occupational ethics and principles of freedom gets removed and the ugly face of the truth starts to show. The race to run the ousted government becomes even more competitive after the coup. Newspapers become bulletins of the coup leaders with a purpose to tailor the public's perception to thank God the military saved them.

After all, successfully manipulating the public is quite lucrative. Another feature of coup leaders is to dole out generous amounts of money. Media bosses have gotten rich after a coup and there have been emptied banks and missing state funds.

We can also analyze July 15 failed coup attempt with these three perspectives.

The intended consortium was not realized during the preparation phase. After stomping down the Dec. 17 and Dec. 25 attempts, the government's active struggle with the "parallel structure" prevented the coup from getting the backing of media organizations and hurt its credibility with the public.

Nevertheless, coup inciters were still present. They tried to brand the fight against terrorism as a fight against the people and cast aspersions of Turkey helping terrorist organizations in Middle East. They used their entire energy to cook up false and biased news without any regard to their own images in order to instill hatred of democratic institutions.

They also certainly tried their best to turn relations and tensions between different groups in society into conflict. After all, it was imperative that the public see the coup as a way to establish unity.

Another step of the psychological operation was to present the threat of the "parallel structure" as a folly or fabricated by caricaturizing the terrorist organization claims. In these times, opposition was replaced by enmity and criticism by slander.

Even though our media organizations did not support the coup on the night of July 15, their records are far from spotless.

On the night of July 15, things changed though. Apart from a couple of insignificant exceptions, all media in Turkey spoke out against the coup attempt as a single entity. That the public stood with its media in this endeavor, and vice versa, was a very important step in foiling the coup attempt.

The coup forces failed to stop media organizations from broadcasting. They were also ousted from the ones they managed to invade. The people were able to reclaim the state-run Turkish Radio and Television Corporation (TRT) and private CNN Türk studios from the coup forces. Attacks on ATV, A Haber, Sabah and Daily Sabah were repelled by people in the streets. By chopping the daily broadcasting schedule and focusing on anti-coup news programs, media managed to put a big dent in the coup plan. Also providing an outlet for the president and prime minister to reach the people was one of the defining moments of the night.

I believe that when we are dealing with a coup attempt, media should don the principles of covering terrorism. The propaganda manifestos of coup forces must not be broadcasted, and news must be given in a way that will not incite panic or fear. From this standpoint, our media managed to get through this ordeal with passing grades, although not exactly top marks.

In the end, the coup has failed, but journalism styles that are beneficial to a coup atmosphere still exist. It is unfortunate that some media started to continue coup incitement tendencies after the coup attempt.

They try to brand people who protected their country and democracy as violent groups lynching innocent people. Their incredible stand was relayed as an anti-military attitude. Some tried to refer to the coup attempt as a stage play, even though hundreds died, thousands were wounded, the president survived an assassination attempt and Parliament was bombed. These media organizations tried to trivialize the treasonous nature of the coup attempt and break up the ranks of people who resisted it.

Apart from these, we also saw a serious problem of disinformation. Manipulative statements, claims from anonymous sources and comments without the backing of material facts can lead to chaos that could prevent uncovering the entirety of the coup plot. This would only benefit the coup plotters.