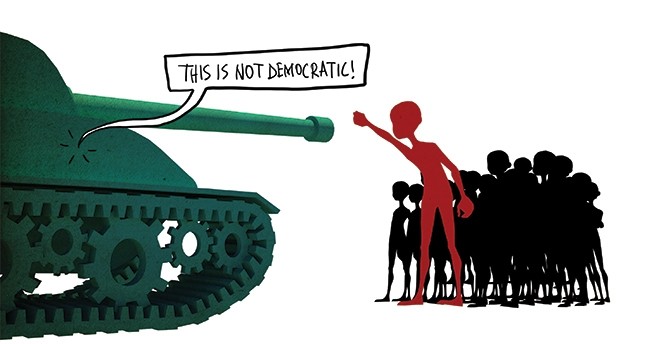 Illustration by Necmettin Asma - twitter.com/necmettinasma
by İbrahim Altay Aug 01, 2016 12:00 am

As we leave behind the second week after the unsuccessful coup attempt, the streets continue to reflect the joyous spirit of the people who managed to foil the junta's plan. Yet when we turn our gaze from the country to the international media to find out what is happening in Turkey, we see a much different portrayal.

For the past two weeks, we have been mainly talking about the Turkish media's approach to the coup attempt, looking at its publications prior to July 15, during the attempt and its aftermath. Now it is time to take a similar look at the international media, as the criticism coming from Turkey on social media toward them on the subject has been monumental.

During the night of the coup attempt, we can call the Western media's approach hopeful. After all, during that long night, when the outcome was still in doubt, many of the media organizations abroad started to whitewash the coup as justifiable and an eventual consequence of the actions taken by the current government. In the first hours of the coup attempt, while the soldiers were seizing the Bosporus Bridge, the New York Times sent a tweet promoting one of its previous articles, "Turkish Leader Erdoğan Making New Enemies and Frustrating Old Friends," with the comment: "A look at [President Recep Tayyip] Erdoğan's controversial rule in Turkey, published just days ago." It almost expresses support for the junta by reminding readers that Erdoğan is indeed controversial and no longer friends with the West.

Sputnik news actively sowed misinformation as well by sharing a photo of people fighting against the coup, but describing it as people celebrating the coup, saying: "Images from the ground in #Turkey show people celebrating #TurkeyCoup." It was another attempt to convince the international community that the coup was justified and well received here.

The Telegraph shared comments from David Blair on the night of the coup, trying to legitimize the military as the guardian of Turkey's secular constitution. Fox News also gave airtime to experts like retired Lt. Col. Ralph Peters who said: "They're against the Islamists, fundamentalists and extremists. They're for democracy. They're for a secular constitution." They also shared his claims in a tweet that said: "Lt. Col. Peters on Turkey: 'If the coup succeeds, Islamists lose and we win.'"

Newsweek was also among those who were justifying the coup when they tweeted a previous article that explained "The reasons why a coup in Turkey is likely." The article was first published on March 24, 2016, and was written by Michael Rubin. Rubin also wrote an article for the New York Post on the night of the coup with the title: "Why the coup in Turkey could mean hope."

Vox was also among those who tried to blame President Erdoğan for the coup, saying: "Erdoğan is clearly a threat to Turkish democracy and secularism. He leads the AKP [Justice and Development Party], a moderate Islamist party that has 'reformed' Turkish schools along Islamist lines. He's cracked down on Turkey's freedom of the press and pushed constitutional changes that would consolidate dangerous amounts of power in the president's hands.

"The military had been shockingly quiet about these developments in recent years, leading many to believe that Erdoğan had successfully cowed them into submission. But this coup attempt suggests – given the stated rationale of the coup launchers – that some in the military are taking up its traditional role as enforcers of Kemalist orthodoxy."

In other words, Erdoğan and the AK Party are to blame for the coup attempt, and it was shocking that the military decided not to intervene until now. Even though in democracies the military is not authorized to circumvent the national will that take form in elections.

American intelligence firm Strafor along with the Daily Beast, Sunday Express and Washington Post reported that Erdoğan was seeking asylum on the night of the coup when it was at its darkest hours. Thanks to Erdoğan speaking to the people via FaceTime on CNN Türk, these rumors were quelled, but if people had been convinced that all hope was lost, manipulation of the events would have struck home.

One might expect that after the realization of the failure of the coup attempt, the tone of its supporters would have changed. It did change, but not necessarily for the better.

After the dust settled and coup supporters were taken into custody, while the various political parties' released statements supporting the people who took to the streets to defend their country, international media found a new target in the people of Turkey.

Disregarding the people who lost their lives against the tanks, attack helicopters and guns and only mentioning them as statistics, the magnifying glass of the press turned toward the coup supporters themselves to show them as misguided individuals who are currently suffering from mob violence and torture at the hands of those who stopped the coup. Nearly every news article on the subject emphasized that the people in the streets were chanting "Allahu akbar" (God is the greatest) to use the already persistent Islamophobia in the West to paint them in a sinister light.

Last week's leaked email from a BBC producer did not help either, and it lends credibility to the belief that Western media were supporting the coup and wanted it to succeed. Criticism on social media said that now that the coup had failed, media organizations were trying to salvage their blunder by blaming the Turkish government. The leaked email said: "We are struggling to find anyone in the country who is critical of what the government is doing … so we are hoping to find someone here who might be willing to speak out against current situation."

While the initial speculation that the coup attempt was staged seemed to have died down, at the time it was quite widespread. The Independent seemed to put on its tinfoil hat with a tweet that said: "The very popular conspiracy theory about Erdoğan and the attempted coup in Turkey."

The Independent also seems to confuse solidarity with destabilization in the article, "Turkey, once the great hope of the Middle East, is left weak and unstable." The headline of the newspaper was a quote from Patrick Cocburn who wrote the article: "Five years ago I thought Syria could become like Turkey. Now Turkey is becoming like Syria." It appears that statements from government and opposition parties joining their voices for the first time in a long time to condemn the coup and the organization behind it is a prelude for civil war in the eyes of the Independent.

The Western media's biased reporting when it comes to Turkey is not a new thing, as we have seen it many times before, especially when it comes to covering terrorist attacks in Turkey, but the blatancy of bias of coup attempt coverage is indeed shocking. Justifying the coup attempt while criticizing the people who stopped it can only be explained as ignorance or an attempt to influence Turkey's politics.

Mentioning hundreds of people who sacrificed their lives to stop the coup as a footnote, while lamenting the treatment of captured coup forces to paint them as victims is a blatant disregard of media ethics, and by transforming themselves as a tool for international intrigue, these media organizations certainly lose their credibility for Turks and readers in other countries.

As the international media seems to fail to grasp the gravity of what happened in Turkey on the night of July 15, 2016, let us provide a simple comparison of what a similar situation in the United Kingdom could look like:

- Tanks closed the Bosporus Bridge and infantry fired at civilians

- The TRT, TRT World and CNN Türk studios were raided by coup soldiers. A TRT presenter was forced at gunpoint to read the junta's manifesto

- The National Intelligence Organization (MİT) was attacked by helicopters

- Police Special Forces Headquarters was bombed by a jet

- BBC, ITV and Sky studios raided by the coup soldiers and presenters forced to read their manifesto at gunpoint

- MI5 and MI6 attacked by helicopters