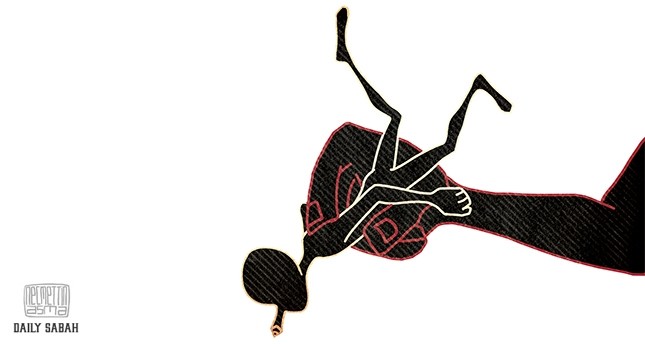 Illustration by Necmettin Asma - twitter.com/necmettinasma
by İbrahim Altay Aug 22, 2016 12:00 am

German newspaper Berliner Zeitung's interview with Can Dündar leaves the newspaper and Dündar pointing fingers at each other, as blatant errors surface concerning reports about Turkey and its people

Republican Party presidential candidate Donald Trump recently said "Obama is the founder of DAESH." When CNN reported this remark, the network included an adage in parenthesis that said "He's not" as if to discredit the statement and warn viewers. While whether CNN has the right to do so from an editorial standpoint is debatable, this decision is also questionable from a media ethics perspective. Regardless of who is right or who is wrong, we will approach another matter that since transpired in Turkey.

Shortly after Can Dündar became editor-in-chief, the Turkish daily Cumhuriyet published reports which claimed that Turkey was sending weapons to DAESH. We wrote about this claim several times, emphasizing that these reports were mistaken and explaining why. We will not delve into those details again, and instead we refer you to previous Reader's Corner articles on the subject. In short, let us say that Can Dündar's purpose in the Cumhuriyet matter was not to document the truth, but it was to fabricate the false perception that Turkey is a country which supports terrorist organizations. Dündar himself admitted to prosecutors that he did not know where the weapons were going.

Can Dündar now lives in Germany and has become the poster child for several media outlets which oppose the ruling Justice and Development Party (AK Party) and which support the July 15 coup attempt in Turkey. One of these organizations, the Berliner Zeitung newspaper, sat down with Dündar for an interview in which the former editor-in-chief of Cumhuriyet said:

"It is not possible to drink alcohol openly anymore in Turkey, in cities besides Ankara, İstanbul and İzmir. This is because of Islam. The segregation of men and women in restaurants, on buses, and at beaches continues to increase. It wasn't always like this in Turkey. Soon the number of religious schools [in the country] will exceed the number of secular schools. A new religious generation is rising. During Ramadan, the police approach people to ask whether or not they are fasting. If you are not fasting, they can beat you. This mixture of Islam and authoritarianism is very dangerous. Turkey is no longer a military state but a police state. We are trapped. Modern Turkey is in danger."

Almost all of the things which Dündar mentioned are in fact wrong. These are not subtle pieces of misinformation; it is quite easy to pinpoint the seeds of the lies being sown here. All that Berliner Zeitung newspaper has to do is send a reporter to Turkey. If they did, they would see that Ankara, İstanbul and İzmir aren't even the cities where alcohol consumption is the highest. In restaurants, there is no gender-based discrimination or segregation. Beaches are open to men and women who enjoy the sea together, and a considerable number of beachgoers are tourists from Germany.

Let's look at another remark made by Dündar. He said, "During Ramadan, the police approach people to ask whether or not they are fasting. If you are not fasting, they can beat you." This is of course a blatant lie. If you travel across Turkey far and wide, you would not encounter even a hundred people who would support this lie.

Another interesting aspect of this remark is that even though it was included in the printed version of the newspaper, it was removed from the web version of the interview. Can Dündar explained the reason that this remark was omitted from the web version through his social media account: "The fact of the matter is: They saw that the newspaper added 'Western sauce' to my remarks and warned me. Most of [the information] was corrected on the website."

In spite of this discrepancy, Berliner Zeitung defended itself by saying: "We wrote only what Can Dündar said. He also gave his consent to publish the interview. But later he asked us to change it."

It appears there is a contradictory situation here. How it is it that Berliner changes the internet version without any sort of explanation, if they presented the quotes to Dündar before printing them? Isn't this against the ethics of journalism?

Yemeksepeti finds itself in hot water

Recently, an online food ordering company called Yemeksepeti, that serves as a middleman between customers and restaurants across Turkey, released an infographic on the types of food ordered by the personnel of various Turkish newspapers. Titled, "Nutrition Dossier of Journalists," the infographic claims to share the five favorite types of food preferred by the headquarters of 13 Turkish newspapers. Sabah was also among the 13 listed, the sister newspaper of Daily Sabah.

Clichés such as "you are what you eat" and all banter about the food preferences of our colleagues aside, let us take a look at the heart of the matter. The infographic is a major violation of privacy rights as well as a manipulation of facts. For example, while the list dubs our building the Sabah headquarters, only a relatively small portion of personnel in the building actually work for the Sabah newspaper. Apart from Daily Sabah, there are more than 30 different media organizations that occupy the same building. Not to mention the fact that many of the personnel here order food directly from restaurants or eat at the nearby cafes or restaurants instead of ordering online.

Even if we disregard this as well, it remains a pure and simple fact that the company has violated the privacy rights of its customers with this infographic. It doesn't matter whether this violation affects a single person or a collective of people; Yemeksepeti abused the trust of its customers by releasing their information without prior consent. Considering previous criticisms raised against Yemeksepeti which included the distribution of customer phone numbers to local restaurants which led to cases of stalking, this company must remember of the importance of keeping private information confidential.