There are no 'good' terrorists 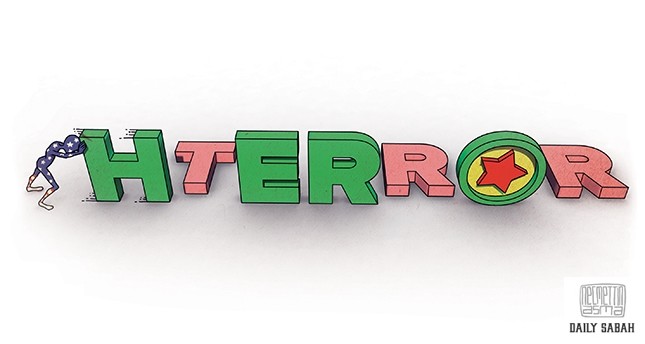 Illustration by Necmettin Asma - twitter.com/necmettinasma
by İbrahim Altay Sep 05, 2016 12:00 am

As the echoes of Turkey's Euphrates Shield Operation into Syria continues in both national and international media, we also carry on one of the subject matter of last week's Readers Corner article while venturing from a different venue. Seemingly simple word choices used when constructing news articles, columns or opinion pieces are chosen with great care by journalists as it can and will set the tone of the entire article. It can be subtle way to carry on propaganda without overt factual mistakes that can be caught in a heartbeat or it can provide the tact necessary for relaying the necessary tone of a tragedy.

Last week we mentioned the usage of the word invasion when reporting on the Euphrates Shield Operation by the international media as it provides a perfect example. New York Times weren't alone in choosing this word of course as it was used by many others whether appropriate corrections were forthcoming or not. This was an attempt at negative propaganda but this time we will look at another case where choice of words used to encourage the related parties despite the facts they are terror organizations.

While media organizations of both national and international media does their utmost to portray YPG (People's Protection Units) or even PKK (Kurdistan Workers' Party) as freedom fighters or similar definitions, the fact of the matter is that these are terrorist organizations. We know that there are executive, military and logistic ties between YPG and PKK. We know that that YPG carried out terrorist attacks against civilians. We know that they carried out invasions in the regions while demolishing cities and killing innocents. We also know that they forced Kurdish, Turkish and Arabian people to migrate if they refused bow their heads. In their quest to portray everyone who harbors enmity against DAESH as an ally, West and several elements of the media seems to miss the fact that the conflict in Syria has more than two sides and not all of them are good. As for the PKK, their terrorist attacks have been continuing to rampage for decades and we would need more than months' worth of Readers Corner articles to cover a semblance of them. Nevertheless, some are available in our previous articles.

Despite these points, usage of definitions like Kurdish forces, Kurdish region and Kurdish freedom fighters when describing the actions of YPG or PKK not only lends credibility and backing to their actions, it also portrays them like they have the backing of the majority of Kurdish population even when they are suffering the aftermath of their actions. This is quite similar to Western media's insistence of using the self-styled name IS (Islamic State) instead of DAESH thus implicating the second largest religious population in the world. Considering the increasing xenophobic and Islamophobic actions around the world, unfortunately it seems to be working.

Same goes for usage of the term Kurdish corridor. It is used to describe the line that is intended to cover entire Turkey-Syrian border on the Syrian side. This region is controlled by YPG. However usage of this term also implicates Kurdish people as well while YPG control this area, so the correct usage would be Terror corridor as it is an attempt to put a stopper to terrorist actions. Thus when talking about this specific region, saying Kurdish region would be similarly remiss and it should be referred as the region invaded by YPG. Current usages do nothing but to aid terror.

We wrote numerous times before. No terrorist organization can represent any religious or ethnic group. Any attempt to associate one with these groups will serve terrorists' goals as it will give them credibility while alienating the aforementioned groups which in turn will made them more susceptible to terrorist propaganda. We can't treat terrorists as freedom fighters. Referring them as revolutionaries, guerillas or militias is unacceptable. When reporting on them, we can't set the tone depending on their ethnicity, religion or goals. There are no "good" terrorists, a lesson we all should take to heart. As much as it appears the subject matter has numerous nuances, in the end these points are all there is to it when dealing with terrorism. So just like we can't say Arab region or Islam region when talking about DAESH's operation are, we should extend the same courtesy to Kurdish people and stop associating their ethnic group when talking about YPG's actions and influence areas. Even if are quoting others who use the terms that are unethical, we should put at least quotation marks.

While the first usages of these terms are almost always deliberate as a propaganda tool, our colleagues must take extra care not to go with the flow and pick their words without care. Editorial boards should decide on a collective term list on these controversial subjects in order to determine the ethical path with regards to journalistic principles as well as universal ones.
RELATED TOPICS