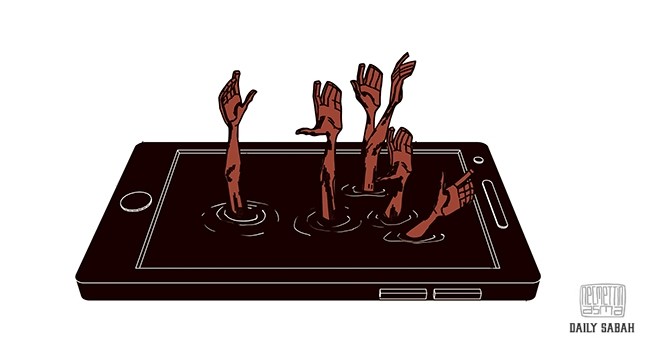 Illustration by Necmettin Asma - twitter.com/necmettinasma
by İbrahim Altay Oct 17, 2016 12:00 am

As we enter the third part of the debate surrounding the concept of news addiction, another perspective shows us that even the usage of the word addiction is not agreed upon, though negative aspects seem, regardless, to affect the psyche of the society

In the past month we brought a debate to your attention concerning the possibility of a relatively new phenomena: News addiction.

While planning this article last week as the third part of the series, the sudden appearance of Hurşit Külter threw a wrench in the works, thus delaying us until this week. Let's summarize the debate to jog the memories of our readers and ease those who missed the previous articles on the subject.

In "Are we addicted to news?" published on Sept. 26, we talked about the need to know about our environment. Regardless of the subject, we want to know what is going on around us, and as no one person can sufficiently meet that need on their own, we need proxies to bring us news. These proxies gave birth to the media industry that now spans the World Wide Web. But as with everything, moderation is the key, and we tried to approach the question that deals with it. Do we start to develop obsessiveness towards news? This hasn't always been a valid question throughout the media's history. After all, even daily newspapers can only cover so much and take so much time to read. As televisions became commonplace in every household, one hour every evening could draw the family together to watch the news, albeit not considered as an addiction. No. Real questions about addiction came with the World Wide Web, the information highway. As the news started to adopt this new medium with surprising ease, the ability to get the news every minute sat at the click of a button.

Endless perusing of the news is certainly a boon for news websites, but when we look at the reasons, it seems it can also be the end of traditional media. After all, the speed of news websites has started to lag behind social media lately, and relatively new features that allow live coverage via big shots like Facebook or apps solely for that purpose beat news websites in terms of speed. Another aspect that seems to appeal to viewers is the sense of inclusiveness, as raw footage draws viewers to the scene of the event more than the specifically edited short footage they see on the news. But that is the subject for another day.

We finished the first article with a view from an expert and moved on to the second one, "Criteria for news addiction," published on Oct. 2. That week we published Dr. Kemal Sayar's views on the subject, and they provided another perspective on the debate. Dr. Sayar said that "as a psychologist who has been working on the subject of addiction for quite some time, news addiction is a fictional category," especially in the case of Turkey.

There has been other input from our readers who work in the field of psychiatry who stated that the media's usage of the word "addiction" is a broad one. Another expert, who shall remain nameless because of his or her official position, also weighed in on the debate at the beginning of October. He said: "To summarize, if we are to look at this as a subcategory of Internet addiction, and look for similar indicators as to other addictions, in incidences where a person can't get online and fails to reach the news, then we can talk about a sub-addiction category as a news addiction."

Thus, we have many opinions on the debate and not all of them are compatible, but they are also not combative, either. Some argued against the universality of the concept, while others said that this phenomenon cannot be classified as addiction on its own but rather a symptom or result of another one.

Nevertheless, we are not the inventors of the phrase "news addiction." While we look at the debate once more, it has been around for some time. On Sept. 26, 2006, Steve Pavlina published an article, "Overcoming News Addiction," on his personal website. Pavlina is recognized as a successful personal development expert and uses his blog as the primary medium for his articles.

Regarding the article related to our subject, he stated that he went through a news fast and abstained from all news sources whether TV news, newspapers or news websites and didn't watch or read any news for a 30 day period. He later on revealed his findings and habits following this experiment in the article. Here are several of his findings:

1 - News is predominantly negative. Which headline gets your attention: "Another blissful day" or "Murderous rampage on the subway"? To keep you plugged in, news has to shock you out of your complacency. In practice, that means it usually has to scare or worry you. News' primary marketing method is fear.

2 - News is addictive. If you're a daily news junkie, try giving it up for 30 days, and you'll see what I mean. Even when I just planned to quickly scan the headlines, I'd often get sucked into reading sensationalized articles that provided no real value.

3 - News is myopic. News provides the illusion of completeness, but in truth its coverage is ridiculously narrow. There are many fascinating happenings in the world that never make the news. After getting your daily update on current events, you think you know what's going on in the world. But with billions of people on this planet, you're sorely mistaken. You don't have a clue.

4 - News is shallow. Complex topics are reduced to sound bites and simplistic platitudes. Even "in-depth" stories are unbelievably shallow. Skip the news and read books instead.

5 - News is untrustworthy. Start looking for the political and corporate agendas behind the stories, and you'll see them oozing out of every nook and cranny.

6 - News is marketing. Think this, don't think that. Fear this, worry about that. Yes, yes, we're all gonna die. Make me feel afraid, so then I'll buy the sponsors products to feel better. Global warming won't seem so bad when I'm driving my new car and popping my anti-depressants. Pump me full of fear, then sell me the cure.

7 - News is redundant. Most news stories are repetitive, redundant and say the same things twice. Very few stories are actually fresh and new. News should really be considered old.

8 - News is problem-obsessed. The news loves to report problems. It will tell you all the things that are wrong in gory detail. How many of those problems have you actually solved? Which ones are you hard at work solving right now? News outlets condition you to worry about problems but not actually solve them. That's because you're encouraged to worry about unsolvable problems and then buy the sponsor products to assuage your fears. Drop the news for a while, and you'll find you naturally spend more time solving problems than worrying about them."﻿

There are 13 main observations Pavlina made, but it seems that these manage to convey his negative thoughts on the news quite nicely. Nevertheless, he also said that news is redundant and irrelevant as well as non actionable. Not to mention that he stated that news is full of trivial matters and largely a waste of time. Allow me to quote Pavlina once more on his calculation concerning how time consuming news checking can be: "If you consume 30 minutes of daily news, it's 183 hours per year - about 23, eight-hour days. That's a full working month out of every year."

Considering how fast 30 minutes can add up in a year, monitoring the actual time an average person spends watching or reading the news can lead to alarming conclusions. An hour watching the evening news every day is almost a given for those who have a tendency to watch TV. How about the time a regular employee spends during office hours while browsing through the endless news cycle? Breakfast with morning newspaper can also factor in the calculation. Flicking through news apps on smartphones during the daily commute is quite common as well. Shared links between friends on bits of news that can interest one another or even cruising through social media for the news is part of our everyday routine nowadays. When we look at it from this perspective, almost half of our time awake in a day can be spent on the news, and no one would bat an eye or even find it slightly odd. After all, when everyone more or less does the same thing to varying degrees, it becomes society's habit.

You may find Pavlina's observations that we quoted above as excessive generalization. You can disagree with some of the examples he made as well. But claiming he is entirely wrong in his conclusions would definitely be unfair. When spending three to four hours perusing the news isn't considered a little bit over the top by social norms, approaching the subject with the general concept of addiction in mind doesn't seem to be amiss.

Even if we can't define the situation at hand as addiction, we have another problem brewing according to these observations. After all, news articles that deserve the classifications above are problematic on their own, especially considering the amount of time people are exposed to them. Even the fear-mongering aspect alone can cause quite a bit of damage to the psyche of an individual or a whole society, a subject we delved into two years ago in the article, "Fear mongering in journalism," published in the Reader's Corner on Nov. 3, 2014.

Regardless of how we classify the phenomenon at hand, it is clear that we have a problem that has been going on unchecked for quite some time, and it will continue to grow as the media industry tries to add more content to the pile as a solution that also works as an enabler instead of improving the quality to shed the negative observations above. We will return to the debate in the future, depending on different opinions, but let us leave it here as a cautionary note.
RELATED TOPICS