Do we get the real picture of Hollywood on Trump? 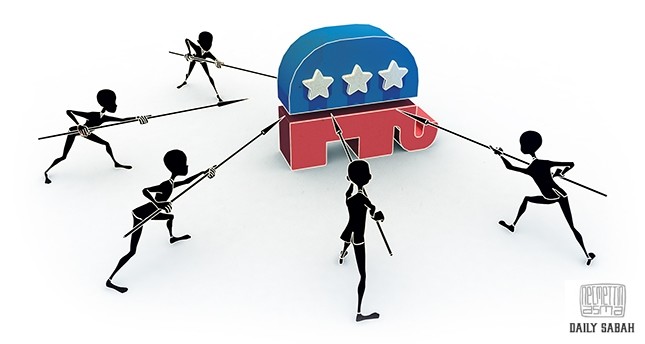 The entertainment industry has always managed to present a more or less united front when it comes to politics but, let us take a look at how much of that front is formed by common ideals and how much is the result of the peer pressure of the industry's giants with the upcoming United States presidential election campaigns on stage

The art world and media have always had close-knit relations ever since the professional coexistence of both sectors. We wrote on the subject some weeks ago in the article "Arts and Media: A two-way road." This week, we will broaden this relation and include politics as well. Of course, the media's relationship with politics is a given, but politics has also always affected the art world and, in some cases, been affected by it. This goes for almost every aspect of the art world whether it is literature, the movie sector or the music industry.

At first glance, the art world is a singular entity in terms of political alignments as well as worldviews. This seems to transcend national borders too, since similar phenomena appear in numerous countries where artists from different vocations present a united front toward the media as well as their followers regarding political views. But are there cracks in this front? Let us find out.

He started his career as an actor in 1997 with "Contract on Cherry Street." The movie was adapted for television from the Philip Rosberg novel of the same name by Frank Sinatra. Sinatra wasn't the only big name he shared a movie with; others include Marlon Brando, Clint Eastwood, James Franco, Bruce Willis, Roberto Benigni, Arnold Schwarzenegger and Benicio del Toro.

His famous works include a Bond movie, "Showgirl" and "Die Hard," and he has acted in over 130 movies. He also appeared in TV series' such as "Criminal Minds" and "Profiler," mostly in roles portraying dangerous and hardened men.

Davi was in Turkey recently. He attended the 53rd International Antalya Film Festival, which took place Oct. 16-23, for a performance. He delivered renditions of Sinatra songs for the closing and award ceremonies of the event. Even among the numerous stars who have taken many leading roles and are followed by masses of fans, he was the most familiar face for those who attended. Interestingly, almost everyone who saw him had the feeling of knowing his face from somewhere.

During the film festival, we were at the same table as Davi for a breakfast organized by the Sabah newspaper. After a long conversation, we came to the subject of the upcoming United States Presidential Elections due to take place this week. We talked about the elections and the effect of the media on the entire process.

Davi said that he is a staunch supporter of Republican Party nominee Donald Trump. Trump and his campaign have been widely covered by the media and in the Reader's Corner we have touched on the subject a couple of times in the articles "Pushing the envelope" published Oct. 24 and "Political correctness: Good or bad?" published Oct. 2.

Davi's main complaint was against the part major media organizations either played against Donald Trump. He claimed the media in general highlighted statements from anti-Trump stars such as Robert de Niro and Madonna, while ignoring the ones who support him. According to Davi, numerous Hollywood stars openly support Trump and receive almost no coverage – a number that is rivaled by the stars afraid to state their support lest they are shunned by the industry. He said the media are trying to create the perception that every big name in the industry is a hundred percent behind Hillary Clinton, though that is not the truth of the matter.

Media corporations in the U.S. make no qualms about declaring their support for a candidate, especially when the nominations for the parties are locked in, and afterwards shape their coverage entirely based on that support.

There are claims this does not lead to problems with objectivity, impartiality and balance with election campaign coverage. But as far as I understand, media in the U.S. this time truly let the floodgates open and turned the anti-Trump stance into real hostility.

Davi said, "The state of things right now is very similar to what happened during the election campaign of Ronald Reagan." In an interview with Fox News, Davi emphasized Hollywood's reluctance to support Reagan, even ridiculing him and his supporters and likened the current state of things to the witch-hunt that took place during the start of the Cold War.

According to him, there is a sizable group among Hollywood stars and staff that remain silent for fear of ridicule and under pressure from the media and other influential names and groups in the sector. In the previously mentioned interview, he said that this pressure extends as far as declining job applications so that the person in question would be hard pressed to find work. Davi stated to us that regardless of the Trump and Clinton campaigns, ideas and respective parties, those who follow the election process should be able to find the truth about the support the parties receive.

One cannot help but wonder though: Is there a difference between the Turkish and American media when it comes to the culture industry and the elections?
RELATED TOPICS